When two atoms or molecules are brought within hailing distance of each other, their average internal charge distributions get modified because the electrons' state in molecule A is now a function of the field coming from molecule B, and vice versa. If, on an average, the electron distributions of A and B respond to each other's fields by shifting slightly to the left, we have an attractive force. The same would happen if both distributions shifted to the right. 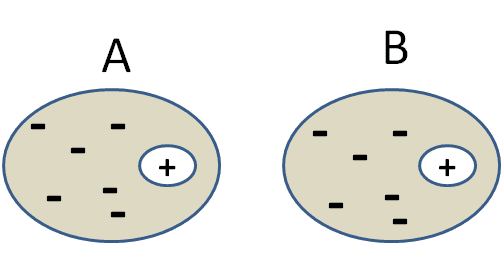 However, this leads to the question, how do they "decide" to move to the left or to the right? In order to bring back some symmetry, there could be two ways of thinking:

[1] When the atoms begin to interact, there is an oscillation of the charge distribution along the line joining them. Since the oscillations in A and B are coupled via the field, they can well be correlated such that there is a net attractive force when averaged over time.

[2] The atoms, as a composite system, are in a superposition of "both left" and "both right", and the net force is attractive because both of these component states produces an attractive force.

My question is, [a] are the first two paragraphs a correct way of describing what's happening, and if so, which picture out of [1] and [2] is better?

The picture [2] is the right one, while [1] is wrong.
Swamp Thing
Insights Author

And now if we move the atoms apart, so that we have retarded / delayed fields at various wavelengths. Let's consider one of those wavelengths as shown:

[1] Is it true that a wavelength will contribute a significant attractive force only if there are many back-and forth paths (round trips) adding up with the same phase, rather than cancelling each other out?

[2] How do we extend the superposition concept from the previous posts to this situation? It seems to me that the time dependent (oscillation) idea might have a role here... but maybe not.

[3] Is there a phase shift that we have to attribute to the "turnaround" process within/around the molecule, between the incoming wave and the outgoing wave? And a turnaround attenuation?
Last edited: Sep 5, 2019
Demystifier
Science Advisor
Insights Author
Gold Member

I guess what's in my mind is a non-rigorous mixture of two ideas. One part is indeed the idea of summing over all possible paths from one atom to the other (and back?), while keeping track of the phase, a la Feynman. (But I'm familiar only with what's in his popular books).

The other part is a classical-ish wavefront that extends from one molecule and reaches the other, while its counterpart goes back from the other molecule to the first. (But keeping in mind that they can't actually radiate away all their energy, so the field is stuck at the level corresponding to the ground state). In this mode of thinking the "path" might be a curve that is always normal to the phase front and goes from one molecule to the other.

BTW, the next thought experiment I'd like to understand is, two walls built up from atoms/molecules, where we can extend this train of thought still further to the Casimir force. I remember reading about experimenters actually building scaled-up models (centimeter scale) and exciting them with microwave energy, then using the measured data to predict Casimir forces in actual nanometer scale structures.

I liked your paper about the toy Casimir model that you shared in reply to a previous question of mine. However, I think it would be nice to have a simpler force-balance or a dE/dx approach rather than a Hamiltonian one which is harder to explain and understand.
Demystifier
Science Advisor
Insights Author
Gold Member

Swamp Thing said:
[2] How do we extend the superposition concept from the previous posts to this situation?

Why do you think it would be a problem?
Swamp Thing
Insights Author

The problem is more about my inability to think beyond this point as to how the total state should be described, including the EM field at a given wavelength -- assuming that I have got the heuristic description correct. For example, "both molecules (or plates) have their charges shifted slightly to the left AND the EM wave is ... what?" What property of the EM wave would drive both charge distributions left or right? Or would any EM field be compatible with both left and right? That kind of thing.

Edit: Perhaps the Pauli exclusion principle has to be somehow invoked as a "deus ex machina" to say that you can have left-left or right-right but not left-right?

I just realized that I could well have asked much the same question about the original configuration where we were concerned only with static fields. Why is "both shifted left" a valid part of the superposition, but not "one left, one right"?
Demystifier
Science Advisor
Insights Author
Gold Member

Swamp Thing said:
Why is "both shifted left" a valid part of the superposition, but not "one left, one right"?

Swamp Thing said:
What property of the EM wave would drive both charge distributions left or right?

Thinking in terms of EM waves makes it more difficult, just as it is difficult to understand Coulomb attraction between opposite charges in terms of EM waves. Instead, I would suggest you to think in terms of static electric fields and neglect the magnetic fields.
Last edited: Sep 6, 2019
Swamp Thing
Insights Author

What is the difference between van der waals interaction and casimir interaction?

Charge attraction inside an atom