I recorded an amazing cloud chamber track tonight. It came from the direction of the sun, seemed like the angle was off slightly though. I was at 1200ft above sea level and it was 6 pm.
I will attach a picture of my setup and a video that is typical and then the video with the awesome track.
It was a simple cloud chamber on dry ice, with a balloon on top. It is lit internally with LED strips.
The awesome track appears to curve, it is a domed glass chamber though. The other tracks appear straight.
I had a thorium welding rod inside along with a piece of americium from a smoke detector.

What was that track!? 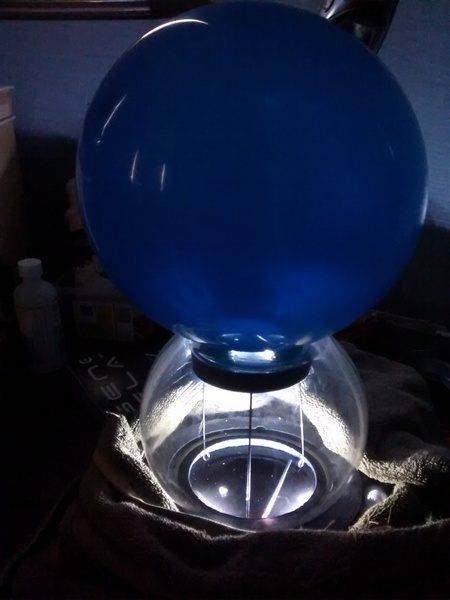 A helical track? I have no idea how that could be.
Ben123

Stellarium says at that time the sun would have been at 17.5deg above the horizon. The track in the video appears to enter the chamber at an upward angle and arc in the chamber downward. The angle I was referring to was the upward entry angle being off relative to the position of the sun.

I have no idea what it was. It was much thicker and longer than a typical alpha particle or any cosmic ray that I've ever seen in my little cloud chamber.
I'm happy just to have caught it on tape!

It almost appears to bounce when it gets to the far side of the chamber? Unless its a visual phenomena when it gets close to the LED light. I'm thinking maybe it was a paint flake or something flying off and it arcs that dramatically just from gravity? Seems more plausible than a massive particle that somehow curved.

If I move my cloud chamber or the supercooled air has substantial movement, I can get even weirder patterns than that.

Looking at various tracks, there is clearly spiral motion in the cloud chamber, which combined with the normal convective motion seen in cloud chambers, could impose some odd distortions of the tracks. There is no mention of whether you are using the typical electrical field to stretch out the tracks and make them more visible. I've heard the occasional thick tracks such as this blamed on energetic alphas or on protons. The number of ions looks too high to be typical alphas from radon decay, so I would assume it is a proton track, ultimately derived from a cosmic ray. In a museum class cloud chamber of 30 cm x 30 cm area, I've seen a track like this visible about once per hour at sea level.
Ben123

Wow, I forgot I posted this!

I eventually did figure out what the very large track was. It had to have been a small piece of the glass dome chipping off and flying through the chamber. There's a tiny piece missing directly on the bottom inside edge of the rim. It likely chipped while the glass was cooling. Internal stress perhaps.

I eventually did figure out what the very large track was. It had to have been a small piece of the glass dome chipping off and flying through the chamber. There's a tiny piece missing directly on the bottom inside edge of the rim. It likely chipped while the glass was cooling. Internal stress perhaps.

Good bit of detective work there. A good resolution to the problem (probably).
Log in or register to reply now!

I My cloud chamber didn't make any tracks...

I Homemade cloud chamber not working