TL;DR Summary
I need to know power on wheels on da Vinci's tank

I'm working on 3D animation about da Vinci tank and why it doesn't work.

Please help me find out how to compute:
1: how many men need to move this machine
2: what power on wheel can produce different number of man, like 1, 2, 4, 8..

Please, keep it as simple as possible, so even 3D artist can understand 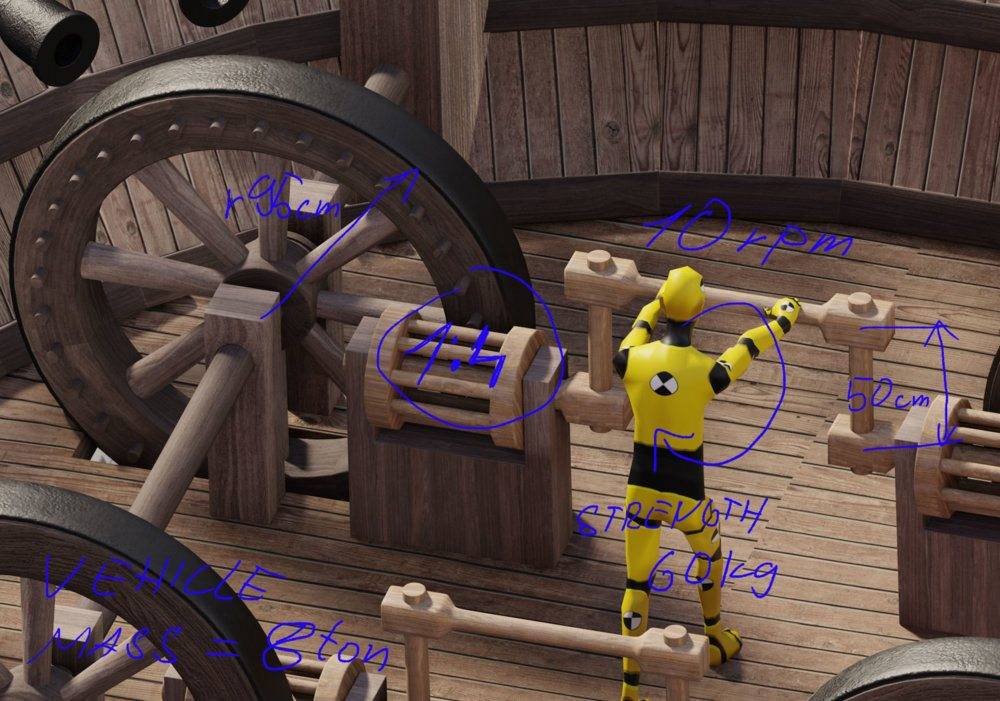 The power required will be determined by the ground surface below the tank. If the wheels sink in it will take power to keep it moving, or it will get bogged. It will need power to climb a hill, but the steel shod wheels will not grip well on a stone or a cobbled surface. The skid-steer may then be sufficient. The power required will depend on the ground conditions and the slope.

A man can apply a greater force by lifting a crank than by applying his weight. The problem with the single crank on each side is that when the crank is high or low it will be hard for any man to apply a significant force to the crank, unless he is in a harness, attached to the walls.
Shubol3D

Hi Baluncore. Thanks for answer.

Yes, this design is wrong, but it's exactly like da Vinci sketch it. Please ignore this fact and take into account like the wheels are turning in the right direction. And there is no steering, this is design from about 1480-1490.

About crank and m,an force: yes, I realized it and doesn't matter, just ignore it.

This is no real project, it's only "virtual reconstruction". I need only simple computation just to get rough idea.

This is what I have. But I don't know how to incorporate gear ratio, number of men and vehicle mass. 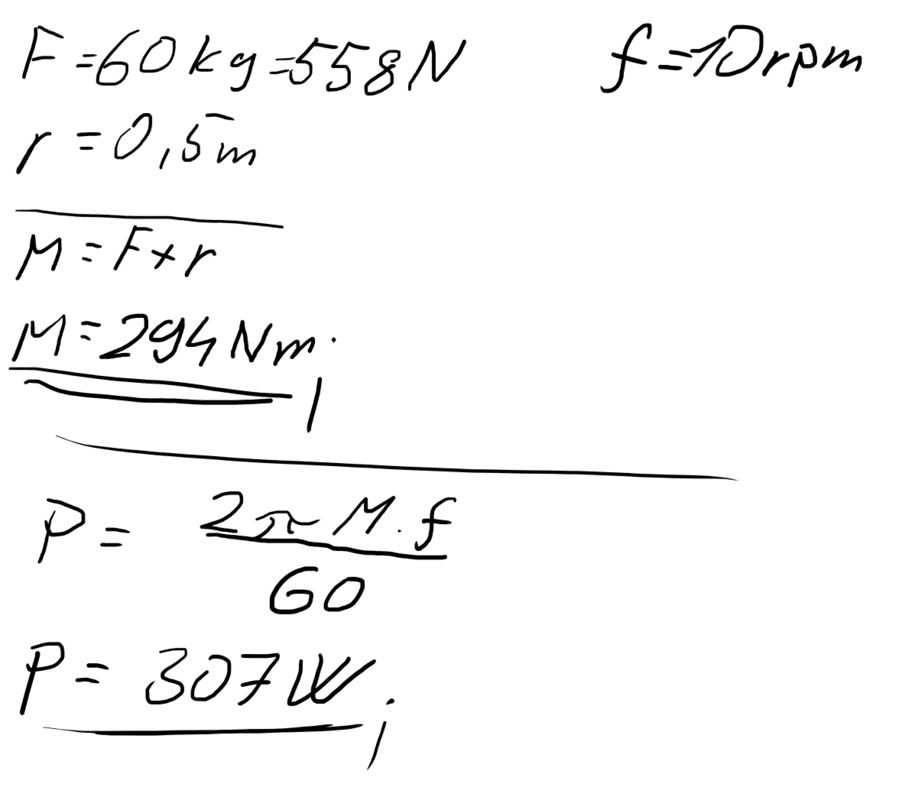 The number of men needed comes down to the power requirements, which is simple energy accounting. If there is no change in height = potential energy, or in speed = kinetic energy, then no energy is required = zero manpower.

Since no power is needed to climb a hill, and the ground is perfect so it will not sink in, only two men will be needed, one on each side. Neither will need to expend much energy as the tank does not need to accelerate quickly. One man could do it if he stood in the centre and worked both cranks.

The wheel direction is fixed by simply making the lantern pinions run on the other side of the front wheels.
Shubol3D

This implies that my idea about "ideal flat ground and no resistance" was not very smart, because it gives very unrealistic results.

My goal is show if this tank can, or can't work. And if is possible to fix it.

So I need:
Unfortunatelly, this is far beyond my knowledge. It's getting interesting, but I don't have time to study everything about topic for a whole month :-(
I believe you have a better overview than me, so please, can you direct me to something what help me get to the solution without reading tons of articles that doesn't help me? Similar problem with solution will be nice.

Thank you for your time and willingness .
jrmichler
Mentor

Start by estimating the rolling resistance. Wood/iron wheels will sink into any ground softer than solid bedrock. I suggest running an experiment. Pump the tire pressure in your car to sidewall maximum (typically 50 PSI or so). Then get a rope and some friends and pull the car over ground similar to that which the tank would travel. Estimate the pull force, or measure using a deer scale (spring scale). Divide into the weight of the car to get a coefficient of rolling friction. You now have a number for rubber tires, multiply by two or three for solid wheels on the same ground.

Estimate the force to move the tank by multiplying the total weight times the coefficient of rolling friction from above. Multiply by the wheel radius to get the necessary driving torque at the wheels.

The wheels are mounted on an axle. The axle is supported by simple wood bearings. Those bearings, if well built and lubricated, will have a friction coefficient about 0.2. Calculate the friction torque of the axle, and add it to the wheel driving torque. This is the torque at the driven gear. Keep in mind that the bearing friction force is at the axle radius.

The right angle gears have a lot of sliding action, so have a lot of friction. Rather than calculating that friction, just add 50% to the driven gear torque. Divide by the gear ratio to get torque at the pinion (the small driving gear).

The pinion shaft torque divided by the radius of the hand crank gives the force needed on the hand crank. Your estimate of man strength is way high. Get a spring scale and pull on it at angles representing various positions of the hand crank to estimate arm strength. You now have the necessary force, and the force that one man can provide. Divide to get the number of men.

Nobody could make any of those pair of big wheels rotate against each other.

"The gears of the design were located in a reversed order, making the vehicle unworkable. This is thought by some sources to have been a deliberate mistake by Leonardo as a form of security, in case his design was stolen and used irresponsibly.

The armored vehicle was designed to intimidate the enemy rather than to be used as a serious military weapon. Due to the vehicle's impressive size, it would not be capable of moving on rugged terrain. The project could hardly be applied and realized in the 15th century.

Around 2010, a group of engineers recreated Leonardo's vehicle, based on the original design, and fixed the mistake in gearing."
Shubol3D

Lnewqban said:
Nobody could make any of those pair of big wheels rotate against each other.

Hi Lnewqban, thanks for interest.

I know everything what you are wrote. But that's not point of my question.

And I don't care about wrong wheels rotation, this can be fixed easily with no impact to calculations. For now let's say they are turning in the right direction.

I need proof in the form of numbers. And also I need proof if was possible, or impossible made similar vehicle with the technology of that time.
Lnewqban
Homework Helper
Gold Member

I know everything what you are wrote. But that's not point of my question.

And I don't care about wrong wheels rotation, this can be fixed easily with no impact to calculations. For now let's say they are turning in the right direction.

I need proof in the form of numbers. And also I need proof if was possible, or impossible made similar vehicle with the technology of that time.

Before computing numbers, you will need to find a solution to that fundamental problem, since it will add more complication to the mechanism, more moving parts and more friction, which will work against the purpose of powering the machine by human muscular power only.

The estimation of the total mass of the machine is also important, because those men will have to overcome its inertia first in order to achieve a constant speed, if at all possible.
Then, you have the problem of endurance, rather than maximum force possible for a brief time.

I would verify how much work two men could produce at a steady rate, considering that you are limited by that transmission rate, which will impose certain minimum speed of the machine and maximum pushing effort.

Shubol3D said:
This implies that my idea about "ideal flat ground and no resistance" was not very smart, because it gives very unrealistic results.

You learn fast. That was your first essential lesson in energy accounting.

The lantern pinions and inserted tooth bullgear technology come directly from windmills of the day, only they are being driven to reduce the final speed, rather than to increase the speed of a millstone or pump.

The large wheels are not driven by the axle. The pegs inserted in the drive wheels are very close to the steel shrunk-on tyre, so the road speed will be only slightly more than the speed of the rods in the lantern pinion. One turn of the crank will advance the machine by about 7 times the pitch of the 6 rod lantern pinion.

That suggests that the size of the main road wheels was chosen to avoid sinking, or chocking on rough ground, rather than to give the drive a lower gear ratio.
Share:
Share

The effect of slightly slanted distance (arm) on torque output

Calculate the gear ratio for every gear