This problem is from MIT OpenCourseWare- a diagram is attached to clarify certain definitions. I'd like to check my answers.

(a) There is simple relationship between the degree sequence of an n-vertex numbered tree and the occurrence sequence of its code. Describe this relationship and explain why it holds. Conclude that counting n-vertex numbered trees with a given degree sequence is the same as counting the number of length n − 2 code words with a given occurrence sequence. Hint: How many times does a vertex of degree, d, occur in the code? 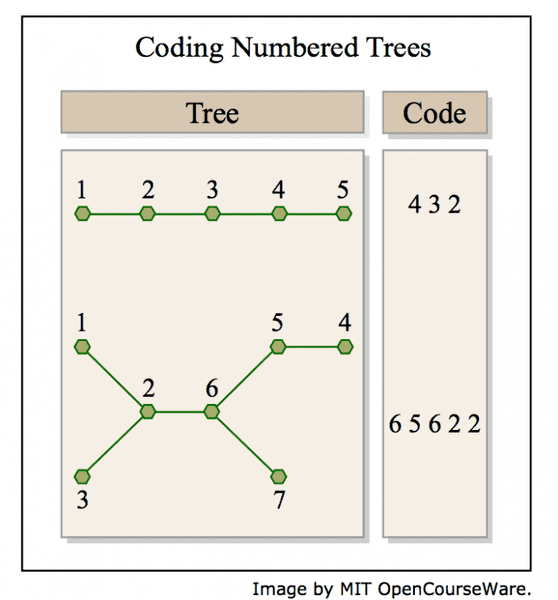 For simplicity, let’s focus on counting 9-vertex numbered trees with a given degree sequence. By part (a), this is the same as counting the number of length 7 code words with a given occurrence sequence.

Any length 7 code word has a pattern, which is another length 7 word over the alphabet a,b,c,d,e,f,g that has the same occurrence sequence.

a) The degree sequence tells you the number of degrees each vertex has. In the code, a vertex will be represented by a value that is one less than its degree. So, to go from the degree sequence to occurrence sequence, subtract 1 from each of its elements. If any values are 0 after the subtraction, they are omitted.

c)
I thought about assigning the integers 1-9 to the various values of the occurrence sequence. This is how I visualized it:

and a factor of 4! to account for redundancy of the permutations of the brackets ie

Is this reasoning correct? b and c are the ones I'm most uncertain about

I get the same as you for d.
QuietMind

Ok, so my answer for c differs from yours by the 4! in the denominator. I think this was an inappropriate case to try to account for permutations of the brackets.
Share:
Share

Finding number of paths via combinatorics

A problem of combinatorics — The number of 5 digit numbers of different digits with...