I've been a fan of this forum for a while, but never signed up for it, today I'm stuck on this problem and can't find anywhere other than Chegg but I don't have a premium account.

1. Homework Statement
A meter stick is at rest on frictionless surface. A hockey puck is going towards the 30cm mark on the stick and is traveling perpendicular to the stick.
After the collision the puck is deflected 30 degrees from original path and is traveling half its original speed. 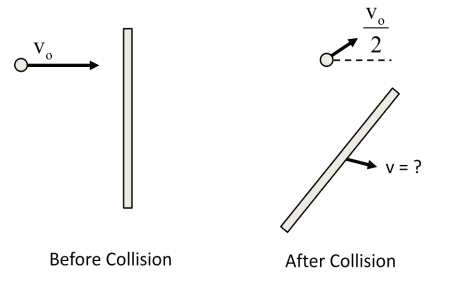 Then I multiplied the mass and velocity to get 1.53 kgm/s
Then I said in order to find the angular momentum we need to know how far the puck is from the stick's center of mass and the angle b/t v vector and r vector.

Now as I write this I think that I should have summed all the forces in x and y component but then I still don't get what to do after that...

WhiteG7 said:
Then I said in order to find the angular momentum we need to know how far the puck is from the stick's center of mass and the angle b/t v vector and r vector.

The problem statement doesn't say this, but it would be usual in a problem like this to calculate the ang mom of the puck immediately before the collision. That calculation is easy because the puck is at the 30cm point of the stick, and the angle between its velocity vector and the vector between stick centre of mass and puck is 90 degrees.
DrClaude
Mentor

You can make use of the conservation of angular momentum before the collision to find a point where r and θ are easy to calculate.
andrewkirk
Science Advisor
Homework Helper
Insights Author
Gold Member

D'oh! I forgot about what Dr Claude pointed out. So the problem doesn't need to tell you to calculate ang mom at the above point. You are free to choose where to calculate it because of it being conserved.
WhiteG7

I see one of my students is trying to get the answers for his homework 9 from online.

Related Threads on Conservation of Angular momentum and linear momentum

Conservation of angular and linear momentum

Conservation of Momentum (Linear and Angular)

Linear and Angular Momentum (conservation of)

Conservation of Angular and Linear Momentum

Conservation of linear, angular momentum and energy in a collision