In the Kim's experiments (see picture below) part of the downwards photons are involved in a quantum eraser and part aren't. 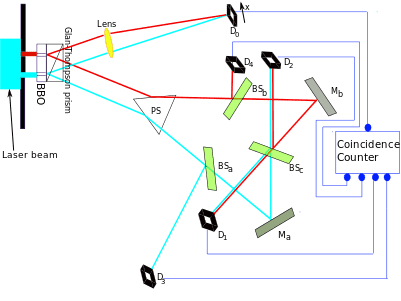 Thanks for bringing up this quantum erasing experiment, I'm ruminating on it as well.

As I understand it, if we apply the eraser to all the entangled photons, i.e. eliminate beamsplitters BSa and BSb, nothing would change: To each photon detected at detector D1 (D2) correlates a fringe-photon (anti-fringe photon) at D0. The function of D3 and D4 is only that to show that as long we have information on the which-way then interference disappears.

As to the 'back from the future' action that's where I got stuck too. But I'm very skeptic. For such strong statements I would like to see equally strong evidence. I believe one can recast the observed phenomenon within the classical causal order. But, admittedly, I have to clarify myself on this. If I may add my two cents... My guess is that if someone replaces D1 and D2 with a screen (or CCD or step motor readout) one would see the fringe- and anti-fringe interference pattern. The photons have orthogonal polarization, say vertical (V) and horizontal (H). The system behaves as if, when photons come from slit A with V pol. and from slit B with H pol. they always hit one detector and produce one type of fringe, whereas when polarization is inverted (photons from slit A with H pol. and from slit B with V pol.) then they always hit the other detector producing the other fringe type. However, that would imply that some sort of destructive (constructive) interference occurs at BSc always to allow the photons hit only D1 (D2) for the two different situations. How this can be I don't know, in fact that could be completely wrong, but seems to me the only way one can save classical causality.
gtorassa 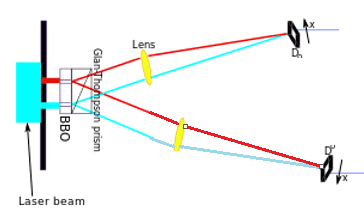 Do we see interference?
Aidyan

But with this you have also eliminated the quantum erasing part. That is, you can trace back the which-way and therefore both detectors will show no interference fringes.

Edit: Thinking on this further (was perhaps too hasty with my answer) I'm no longer sure. In fact how can we establish the which-way with this setup? Only by inserting again a detector on the path. Ok, I'm confused , should perhaps delete this post, just keep it for those who have already read...
gtorassa

don't worry, I'm confused too .
I have been thinking about this problem for some months but I cannot solve it
Mentz114

gtorassa said:
don't worry, I'm confused too .
I have been thinking about this problem for some months but I cannot solve it

Thanks. This article seems to be precisely what I was looking for. Will go through it. Kastner has also many other similar articles on the matter. She seems to work a lot on the transactional interpretation of QM. Her blog might give more insights: https://transactionalinterpretation.org/
Log in or register to reply now!