Does anyone know what this equipment is for?

I have found this chemistry equipment, but I cannot determine what it is for. I have a suspicion it is for measuring boiling point temperature elevation. 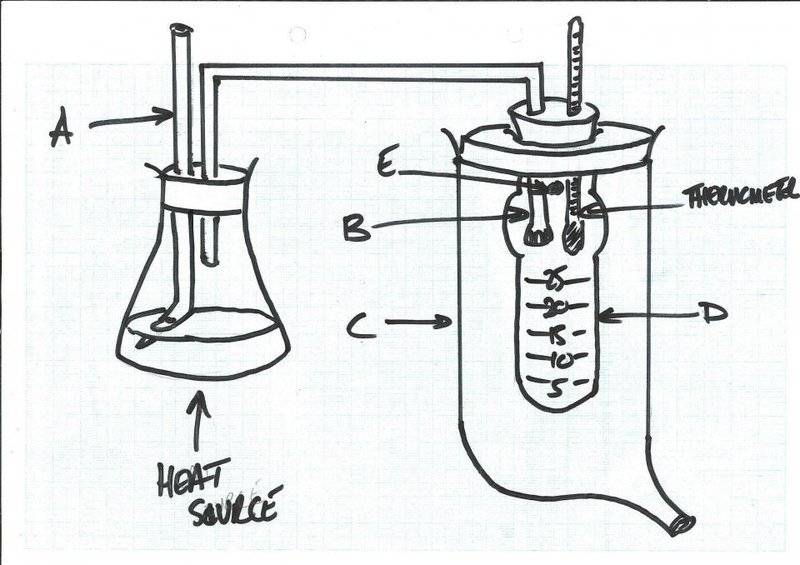 It could certainly be used to separate methanol from your brand.
Fervent Freyja
Gold Member

fresh_42 said:
It could certainly be used to separate methanol from your brand.

Anyhow, I thought the drawing was quite nice.
256bits
Gold Member

Would it make coffee - water in the flask, coffee grinds in the boiling tube, and cup under the spout?
Steam should be demineralized.
ogg

I don't know what this is. Here are some ideas, based on your descriptions. First, as you know, anything except straight glass tubing adds to both cost and makes the equipment much more delicate, so nothing is done without a good reason (at least, in the mind of the designer). You appear to have drawn a hole in the side of A near the bottom. I've no explanation for that, which suggests that my other ideas are suspect. I assume A's design is intended to drip liquid down the side of the flask, so that the material at reflux is being added to very slowly and gradually. This is obviously some sort of separatory apparatus, but I do not know whether there is a reaction going on in the flask, nothing to confirm it, but nothing to contradict that idea. Anyway, some volatile is being separated and moved into D. The fact that B has "holes" at the bottom suggests it is being used submerged to bubble the evaporate through some liquid in order to collect (or react??) it. Since D is graduated, I'd assume there is some 'yield' expected. So both volume collected and temperature are used as control variables. As far as C is concerned, is it possible that there is a vacuum being pulled? I suppose that none of this necessarily has to be done under air, perhaps some gas is being introduced from A as well. The thing I like least about this is that the only temperature control, is from your heat source; no cooling is provided, in fact the C+D would tend to keep D's contents hot (with the exception of cooling due to gas flow). So, I'd further speculate that this is used well above room temperature (I'd guess at least 50°C if not double or triple that). Is it possible this has something to do with petroleum assay? I really don't know.
Charles Link
Homework Helper
Insights Author
Gold Member

Related Threads on Does anyone know what this equipment is for?

Mass spectrometry: does anyone know what could be this compound?

P
Does anyone know what color azo-dye

K
What is this piece of equipment?

Does anyone know the color of these species?

Does anyone know how to do these two questions?

Does anyone know the ionic radius of hydride(anion of hydrogen)?

C
Does anyone know which, if any, liquids or chemicals absorb infrared

C
Does anyone know how to make rust from steel plates

E
Does anyone know of a thermally-stable endothermic reaction?

Anyone know the dielectric constant of OTS?