Does hybridisation only occur with Carbon?

I've been studying how hybridisation works, and in very single example I've come across, there is always Carbon as the atom that undergoes hybridisation. But this can't be right, can it?

Hybridization can occur with most atoms. For instance, the nitrogen in NH3 is sp3 hybridized. The reason we tend to focus on carbon is because hybridization plays such an important role in understanding bonding in organic chemistry.
DrClaude
Mentor

Hybridization is not related to the number of bonds, but the spatial geometry of those bonds.
DrDu
Science Advisor

The only place where hybridization occurs is in our minds. You can describe nitrogen compounds with or without hybridized orbitals on N. The results are mostly very similar. It is also possible to describe bonding in ethylene using so called banana bonds made from sp3 hybrids on C.
For oxygen, hybridization becomes quite unfavourable due to the huge energy difference between 2s and 2p orbitals.
James Pelezo
Gold Member

Hybridization is a term that surfaces in explaining the transitions that occur at the valence level during molecular bonding giving 'Molecular Compounds'. This event can theoretically be applied to any nonmetal element, but is most frequently applied to Carbon, Nitrogen, Oxygen and the Halogens. However, the principles can be applied to Silicon, Phosphorous, & Sulfur. The concept of hybridization can be found in most freshman level general chemistry textbooks in the chapters on Molecular Geometry under the Valence Bond Theory. Here's a post entered on 9/14/2016 on Hybridization, maybe this will help... https://www.physicsforums.com/threads/why-does-hybridization-occur.885346/#post-5570100 => Dr Pelezo 9/14/2016. Hope this helps.
Borek
Mentor

James Pelezo said:
can theoretically be applied to any nonmetal element

What stops it from being applied to metals?
DrDu
Science Advisor

Borek said:
What stops it from being applied to metals?

Nothing, although I think that despite Paulings resonating VB theory of metals, VB theory is more appropriate for non-metals than for metals, which are better described in terms of MO theory. The reason is that in metals both ionisation energies and electron affinities are small, so that generating ionic contributions in covalent bonds is energetically neutral in metals, but disfavoured in non-metals. MO theory includes these ionic configurations automatically, while you need many resonance structures to include them in VB. In covalent non-metal compounds, the ionic structures are suppressed whence VB gives often a better description.
James Pelezo
Gold Member

Actually, nothing ... Be and B, using the Valence Bond Theory, are hybridized to sp and sp2 orbitals to generate linear and trigonal planer geometries respectively to accommodate formation of compounds like BeX2 and BX3 where X = Halide. For Gp IA metals, showing hybridization would mean showing an s-orbital changing into a paramagnetic hybridized orbital which overlaps with a paramagnetic orbital of the non-metallic anionic fragment to generate the diamagnetic bonded pair. Ionization would then be based upon a highly polarized system that undergoes 'heterolytic bond clevage'. Such, in my humble opinion, seems to be over-kill for describing a simple process. There might be circumstances/studies where such would give a better understanding of the process. I guess it would be more accurate to say (in my post) that hybridization is 'most frequently' applied to nonmetallic elements in molecular compounds or polyions; but both the valence structure of the cation metal and anion nonmetal fragments could (and, maybe should) be shown to be hybridized to accommodate the bonding process being described.
DrDu
Science Advisor

James Pelezo said:
For Gp IA metals, showing hybridization would mean showing an s-orbital changing into a paramagnetic hybridized orbital which overlaps with a paramagnetic orbital of the non-metallic anionic fragment to generate the diamagnetic bonded pair.

Whatever a paramagnetic orbital may be...
James Pelezo
Gold Member

Are you asking what is paramagnetic? If so, in an unbonded hybrid orbital, containing only 1 electron is said to be paramagnetic. When two paramagnetic orbitals overlap, a covalent bond is formed containing paired electrons (the more stable configuration). The pairing of the electrons for the purpose of forming a bond between two elements is referred to as diamagnetic. Diamagnetic stability (paired electrons) is greater than paramagnetic stability and is the most fundamental driving force in the process of chemical bonding.
DrDu
Science Advisor

At best, the electron is paramagnetic, but not the orbital.
James Pelezo
Gold Member

DrDu said:
At best, the electron is paramagnetic, but not the orbital. 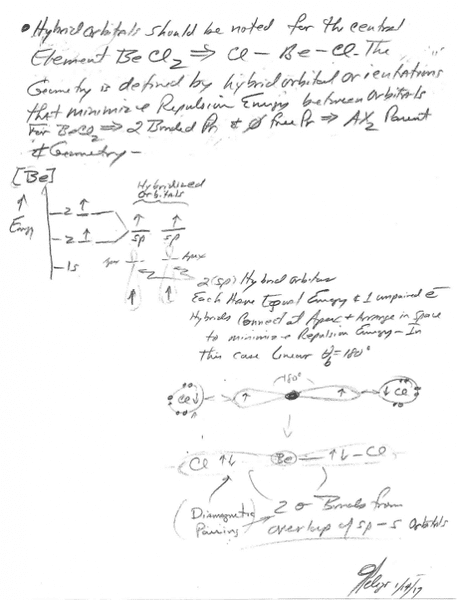 James Pelezo said:
The terms used to describe an orbital containing one electron is paramagnetic

Do you have a reference for this terminology?
James Pelezo
Gold Member

Related Threads on Does hybridisation only occur with Carbon?

Why sp2 hyb. have more energy density compared with sp3?

Hybridisation of Mn in MnO4-