Eleven Inner Planets--What Will Earth's Ice Ages Be Like?

A Milankovitch cycle is defined in Universe Today as "a cyclical movement related to the Earth’s orbit around the Sun."

There are three elements to a Milankovitch cycle that affects the amount of solar heat and with it, the Earth's climate:

"Precession as well as tilting are the reasons why regions near and at the poles experience very long nights and very long days at certain times of the year. For example, in Norway, the Sun never completely descends beneath the horizon between late May to late July."

In an alternate universe, orbiting a yellow G-type main-sequence star are not four Inner Planets, but eleven. 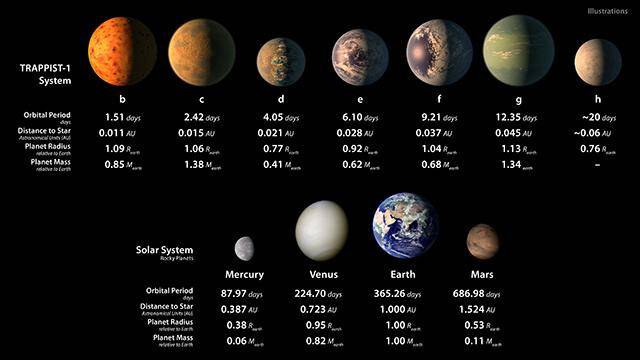 How will the changes listed above affect Earth's nightscape and its Milankovitch cycles?

JohnWDailey said:
So it seems ideal to mesh the two systems without problem.

That is oddly specific, and the mass at that precision will change on a daily basis based on asteroid impacts.

JohnWDailey said:
and orbits the planet from a distance of almost 475,000 miles.

That orbit is probably not stable over billions of years with a sun-like star, so we need a lighter star. Earth will be very cold.

JohnWDailey said:
How will the changes listed above affect Earth's nightscape and its Milankovitch cycles?

Impossible to tell with the information provided. And even with the missing information, it will require a lot of simulation work beyond the scope of a thread here.
JohnWDailey

The mass was what I got from Ganymede, which was dividing Earth's weight by 40.5, which is half that of our moon. It's said that Ganymede has twice the moon's mass.
mfb
Mentor
Insights Author

Rounding up sometimes spare people the headache.
Log in or register to reply now!

Related Threads on Eleven Inner Planets--What Will Earth's Ice Ages Be Like?

Could a moon orbiting a water-giant planet look like earth?

Help with orbital mechanics for an unusual alien planet
2

A Series of Exoplanets in Our Solar System

We colonize an Earth-like planet with 2 million people...
2