Finding acceleration of a box with two forces acting on it

Two people pull on a 25kg box that is resting on smooth ice. What is the acceleration of the box? Assume friction is negligible. 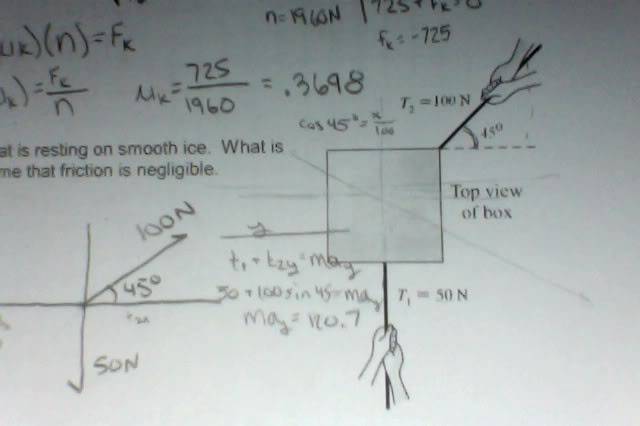 the img is important bc of the description of the two forces acting on the box. try and ignore my frustrated chicken scratch.
t1=50
t2=100
theta=45deg

I tried to calculate the x and y acceleration using fnet=max and fnet=may but I got stuck. I wasn't sure based on the picture how to calculate gravity or the normal force so I just ignored it... possibly a mistake. i have
Fnet=max
t2x=max
t2cos(theta)=max
Fnet=may
t1+t2y=may
t1+t2sin(theta)=may

not sure where to go from here.

mikky05v said:
I tried to calculate the x and y acceleration using fnet=max and fnet=may but I got stuck. I wasn't sure based on the picture how to calculate gravity or the normal force so I just ignored it

In the picture, which direction would gravity point?
Is it, therefore, safe to ignore?
Why would you normally need the "normal" force?

I'm not sure of your notation so I tidied it up below to see if I understood you correctly.

This says that the net force gives an acceleration in the x direction. Is that what you intended?

... only force with an x component (if the x axis points to the right, that is). Leads to:

Oh I think I see what you mean there - you are trying to say that you are working out the net force in the y dircetion?
Try to avoid using the same label for different things. So:
ƩFx = T2cos(θ)=max says what you are doing and does it.

... Is the +y direction up or down the page? Which direction do the forces point? Does one force oppose the other?

Once you have the components of the acceleration, you have to combine them into a magnitude and a direction for the total acceleration.

You could also have done this by geometry - draw the force vectors head-to-tail and you get a triangle. Find the resultant force by the cosine rule ... and it's angle from the same horizontal by the sine rule. Then put Ftot=ma. (Actually, when you draw the triangle the components method will suddenly make sense!)

Find acceleration of a box given the forces on it...

Forces acting on a box

Is there no force acting on the box?

Determine the frictional force acting on the box

What is the force acting on a box on a conveyor belt?

Find the acceleration of the box.