How do I calculate density given height and volume?

I’m trying to calculate how many Joules are stored in the Hyperion tree, the worlds tallest (115.84 m). However, I cannot find the mass of said tree, and am trying to find it by multiplying density by the volume (530 m^3) because if p=m/V then p•V=m, but I cannot find the density of the tree, so how can I find density given height and volume, if it’s possible? 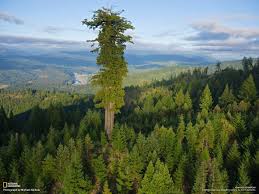 Height and volume are not enough to figure out anything about mass.

That said, you can probably just look up the density of a generic tree and get something close enough.


an estimated aboveground dry mass of 209 metric tonnes (230 US tons),

Office_Shredder said:
Height and volume are not enough to figure out anything about mass.

That said, you can probably just look up the density of a generic tree and get something close enough.

One could also find whether it’s a hardwood or softwood and further estimate the density.

Lastly, if there’s any lumber store featuring this wood, you might find the weight of a given plank and compute the density from it.
jedishrfu
Mentor
Insights Author

My favorite thing about Google is how it will just do this for you, so you don't even have to worry about the conversion.

The volume estimate in the op + weight estimate in my post give 25 lbs/ cubic foot. Not far off from your number.
Godzilla-3301

jedishrfu said:
I found the tree is a redwood and I found this density table

jedishrfu said:
I found the tree is a redwood

But what kind of redwood?

The Hyperion tree of this thread is almost certainly a Giant Redwood, a type of redwood found in the Sierra Nevada Range of California, especially in Sequoia National Park. The Coast Redwood is found mostly along the coast of Northern California. The Dawn Redwood, which was a new one to me, is found in China.

As a sidenote, I found it interesting that the "sequoia" part of their names is in honor of Sequoyah, a Cherokee who was responsible for the syllabary of that language.
Share:
Share

Suggested for: How do I calculate density given height and volume?

MHB How do I calculate the amount from the volume?

I How do I do this calculation involving the SIN function?

MHB I need a formula how to calculate it

MHB How do i improve my Prealgebra ?

MHB How to do this problem

I How to do algebra on the Kitaev toric code grid?

MHB How do I find the average of two averages?

B How to calculate size of objects in digital photo