How does length affect the bending of a horizontal beam? 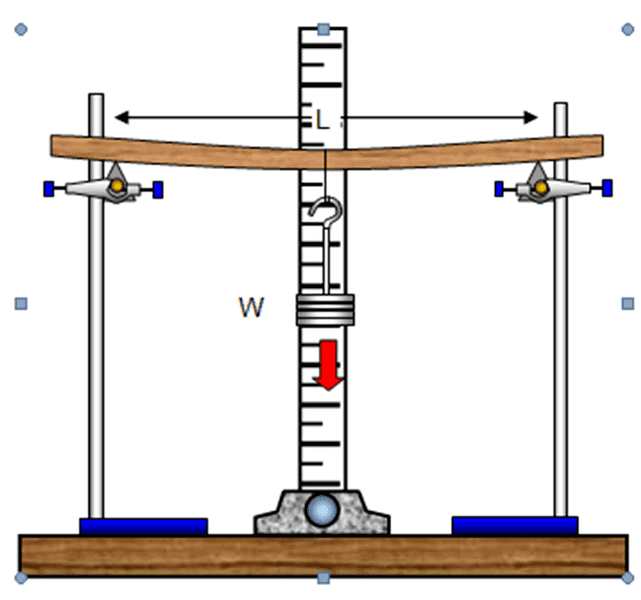 We were shown this image ^
We were later told that it is suggested that the depression (y), is directly proportional to the length of the beam cubed (L3). We were asked to give reasons why this is so.
EDIT: The 1kg mass is placed at L/2

y is directly proportional to L3


[/B]
I am rather confused, I think moments may be involved and we were told to consider the force acting on the metre rule. I know it isn't much of an attempt, but any guidance in the right direction will be extremely grateful.

The thing to be proved is not a "relevant equation". The idea is to post standard equations that you might need to solve the problem. In the present context, should be something about bending moments.
ME_student

Did you figure it out?
Matternot
Gold Member

Try working through this revision guide on it: http://www.doitpoms.ac.uk/tlplib/beam_bending/bend_moments.php

The important results are:

The equation for the moment(s) prodced e.g Fx
The equation for the bending moment for the rod being EI/R where I is the 2nd moment of area of the rod: http://en.wikipedia.org/wiki/Second_moment_of_area
1/R is the radius of curvature of the rod. This can be essentially considered as d2y/dx2

From this, you should be able to work it out.

Related Threads on How does length affect the bending of a horizontal beam?

How to determine the maximum bending moment of a beam

S
How does inclination affect the efficiency of a ramp?

J
WHY does curvature of a convex lens affect focal length?

How does the altitude of an airplane affect the velocity?

I
How does changing the duration of a collision affect impulse

D
Find the frequency of the oscillation of a horizontal beam.

I
How does ice affect a drink?

How does the position of a force affect a spinning wheel

How does the ocean affect daily temperatures?