How to measure center-to-center or centre-to-centre?

I've always been confused by this concept:
How do you measure center-to-center in engineering terms when the objects are on different x and y coords?

When objects cross the same x or y plane it's simple enough, just draw a straight line from center to center. When they aren't on the same x or y plane you have two choices: draw a straight line in one movement from object to object using x and y planes, which will be the longest distance of the two options, or draw only in the x plane until you hit the vertical centerline of the other object.. which would be a shorter distance.

or are they used interchangeably in different trades?

I'm not sure what you mean either but very often the 'centre' is not a point but a line, called the centre line. This 'line' may even be a plane surface, cutting through a symmetrical object.

So for example the centre to centre for a hole drilled in a flange may be the distance from the center of the hole to the centre line of the flange.
Simon Bridge
Science Advisor
Homework Helper

I suspect engnoobie is unsure how to handle the third dimension.
I'd like to hear back before drawing conclusions and writing a huge spiel.
tygerdawg

Many different methods to do a measurement on features like this, with varying degrees of accuracy:

And many, many more methods depending upon your measuring devices and your creativity.
engnoobie

To measure the center-to-center between the two lights is not clear, you could either draw a straight diagonal line (z in the picture) which would be a longer distance and the real distance between the objects with no constraints assuming there is no 3D factor.

Or you could constrain yourself to measuring only perpendicular, and then the center-to-center distance would be the lowercase (y) in the picture

And whoever has the answer, you might want to update wikipedia with the info - this was the first time I searched for something for like an hour and a half and couldn't get any better clue from google than when I started, I used various keywords(center-to-center, center to center, centre to centre, centroid to centroid, on center, how to measure on center, elevation and centerlines) and many more variations on google without ever finding one that takes into account differing elevations or explains it in a smart terminology like they do for other geometrical measurements which are well defined/understood.

as you can see in the wikipedia article, it shows that center to center is used to not get confused by the differing widths of objects, but what about differing elevations?
Last edited by a moderator: May 6, 2017
Studiot

Well at least you elaborated on your problem. Thanks.

But why the rage?

Wikipedia is clearly talking about plan distances, in which your example would be distance y.

It is up to the initiator of the statement to define whether she means a the projected distance on a particular plane (plan distance) or the diagonal distance (= actual distance between the points in 3D space).

Normally this will be clear from the context.
That is if you are reading a conventional engineering drawing the distance will be the projection distance x or y and you have to calculate the actual 3D distance from measurements on at least two views.
Simon Bridge
Science Advisor
Homework Helper

I note for the pillars in wikipedia that the "center" of the pillar is a line, and they measured the horizontal distance between those lines. In that definition, the elevation is irrelevant.

To take account of elevation, you need to define the center as a point so that one center can be above another one. Center of mass is a common method.

In that case, the distance between them is the length of a line connecting the centers of mass.
Studiot 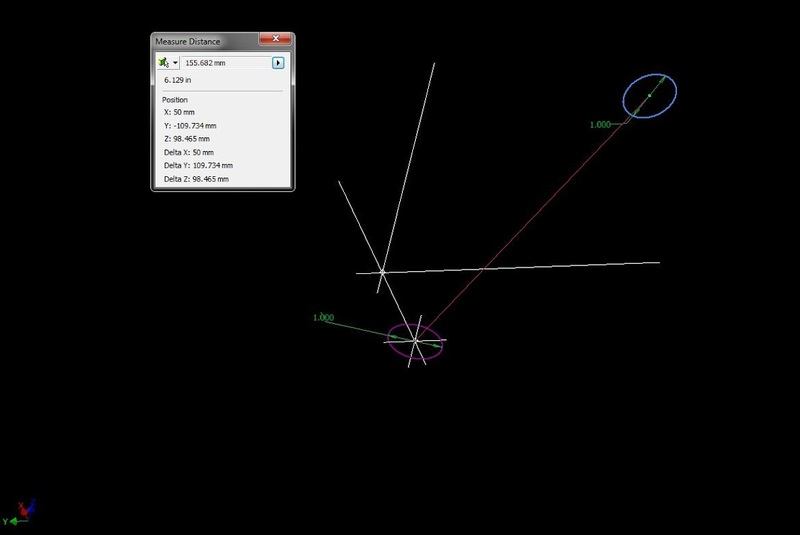 What is the big deal? Just measure the center to the center. It's a straight line. and it's 3D...


Am I missing something?
Simon Bridge
Science Advisor
Homework Helper

This is the trouble isn't it - context is missing. Perhaps too much weight is being placed in the definition of a label "center to center" and not enough on desired outcomes. i.e. the map is being confused with the territory?

Once you know what you need to measure - then, how to measure it, tends to sort itself out.

studiot said:
It is up to the initiator of the statement to define whether she means a the projected distance on a particular plane (plan distance) or the diagonal distance (= actual distance between the points in 3D space).

Normally this will be clear from the context.

You have to take into account the manufacturing process.

The handyman or construction foreman would be a little dismayed to find the ceiling lights location being listed as the actual distance between their "centers". They would much rather have a plan view and an elevation view, with no calculations involved.

If on the other hand, the distance Y-X is a member to be manufactured then you could/would specify its length in an auxilary view. But that is dependant upon whether you want X and Y at a specific locations or do you want the length XY to be specific.

Suggested for: How to measure center-to-center or centre-to-centre?

How best to heat my house?

How to use Simpack to change the profiles of a rail

How To Convert Kvs-Value For Water To Kvs For Gas?

How to maximize servo torque?

How to model the behavior of a closed loop position system?

How long would a lever have to be to compete with a hydroelectric dam?

How could you move a substantial amount of air to a certain direction?

How to select the required accuracy of an instrument?