How to tell if two compounds will react?

For example, NaBr can dissolve in water but will it react with water???
I apologize if it is an oversimplistic question.

It is not a trivial question, unfortunately, there is no good - as in "reasonably easy and useful" - answer.

Basically predicting what will happen is what people learn for all these years they study chemistry. Predictions are based on the properties of the compounds and on the thermodynamics. And then you mix everything and - sometimes - it reacts as predicted.
self_service

Let's start with your example. NaBr is an ionic compound. Sodium carries a positive charge and bromine carries a negative charge. NaBr dissolves in water because water is a polar molecule. You can think of one "side" of the water molecule being positive and one side being negative.

Here's where it gets interesting. When you put the NaBr into the water, the water molecules will begin orienting themselves based on their attraction to the sodium/bromine in the molecule. While one water molecule wouldn't be enough to rip the NaBr apart, when you have all of them together, that total attractive force is enough to break the ionic bond between the sodium and the bromine. This leaves a sodium ion and a bromine ion. Once released, these ions don't react; they just float around.

There is a limit though. Like I said, you need more than the force from one water molecule to break the NaBr apart. You may have noticed that if you've ever dumped table salt in water, after a certain point, no more will dissolve. The measure of how much of a substance will dissolve in water is called the solubility.

For the second part of your question, the biggest reason NaBr won't react with water is because of intermolecular forces. Specifically, there is a force called hydrogen bonding, which occurs when a hydrogen atom bonds to nitrogen, oxygen, or fluorine. Water is hydrogen bound to oxygen.

To analyze this potential reaction, think of a chemical reaction as the process of breaking bonds between some molecules (the reactants) and then forming new bonds (the products). You're essentially rearranging atoms.

Hydrogen bonding is the strongest type of intermolecular force. That means that it takes a lot of energy to break the bonds within a water molecule. H2O wants to stay H2O, and that's why no reaction occurs.
Borek
Mentor

self_service said:
Hydrogen bonding is the strongest type of intermolecular force. That means that it takes a lot of energy to break the bonds within a water molecule.

Intramolecular bonds between hydrogen and oxygen, present in water molecule, do not classify as hydrogen bonding.

Sure, in large conglomerates of water molecules, especially in acidic/basic solutions, things can get complicated and it may be not entirely clear which hydrogen is bound to which oxygen, but it still doesn't justify calling bonds in water molecule "hydrogen bonds".
self_service

In a container of water, the molecules share a mutual attraction. After looking at my previous post though, I worded it very poorly. The bonds occur not within the individual atom itself but within the water molecules as a group. Instead of saying "within a water molecule," I should've said "between water molecules." Thanks for pointing that out. 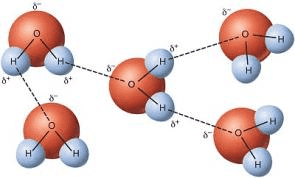 Some reactions are made easy by the existence of hydrogen bonding.

Related Threads on How to tell if two compounds will react?

How to tell if ionic compound has a higher melting point?

S
How to tell if fuel is contaminated?

How to Tell if an element is radioactive

D
How can you tell if a reaction is spontaneous?

How a alkyne will react with a ketone

B
How Do You Tell When A Compound Will Form A Coordinate Bond?

How to identify unknown compounds

How to tell whether a reaction is an elementary reaction

Names of these two compounds?