Looking to develop something that will "hang" as shown in the drawing without falling off and without requiring permanent attachment. Any help appreciated.

Berkeman, Thank you for your quick response. Let me see if I can offer more info in regards to your comments:

1) Without diving to much into what I'm trying to develop, yes, the 300lb load is a person. That being said, I can assure you the application does not present a dangerous situation. There is nothing below that could be injured or damaged with a fall and if the person were to fall, the height and surrounding environment would prevent injury.

2) Ideally the product would be made out of a plastic, enough to support the application. And to be frank, I don't know enough about physics to intelligently answer your question regarding the coefficients of friction. However I can say the top of the wall would be concrete and possibly a textured concrete. As for degrees of freedom in the design, I'm assuming you're asking how much can the design change to accommodate a solution. If that's the case, it can change quite a bit. The goal is for it to be somewhat light weight and portable. As an example, and if I'm understanding the friction question correctly, a piece of rubber or silicon could be placed under the top portion of the product where contact with the wall is made, in order to create more friction if needed.

3) Being that the load is a person, I think the load would then be considered dynamic, however movement once on the product would be limited. It's basically a chair of sorts.

4) As for type of project, at this point it is nothing more than a conceptual idea for a product that I'm trying to figure out if it can actually work. Proof of concept. I have built 2 prototypes: one of which failed, and the other used a clamp to grip the small lip at the top of the wall. This one worked, but couldn't support the full load. Only about 100lbs.

Thanks for the reply, @tbaron27 it's helpful.

In designing and building structures like this, you should think in terms of triangles and I-beam shapes. using flat pieces for a structure like that leaves the bend locations too weak to support loads. So the top bend should have some I-beam type shaping to increase its strength and resistance to bending, and the lower bend should be reinforced with triangle shapes across it to similarly resist bending.

Take a look at how angle irons and shelf brackets are reinforced to increase their strength against bending. You need to add structure to keep the bend from being "flat". The first 2 images below show ways you could add bracing to the bottom bend, since you have room on the inside of the bend to add triangular bracing. You could use plates or rods welded to the sides of your vertical plate and bottom plate to add the bending strength for the bottom joint.

And yes, adding some sort of high-friction material like medium density rubber to the contact patches with the wall would be a good idea (and would help to prevent scratches and other damage to the wall. 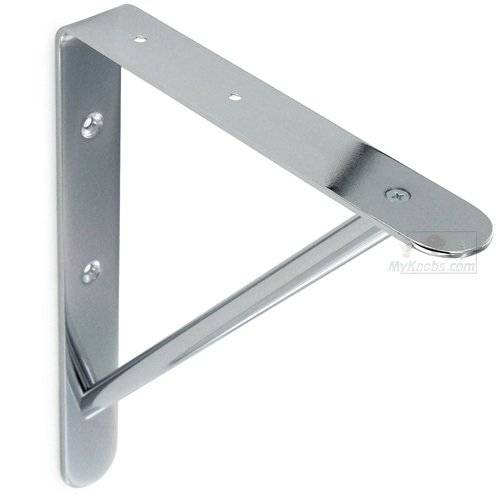 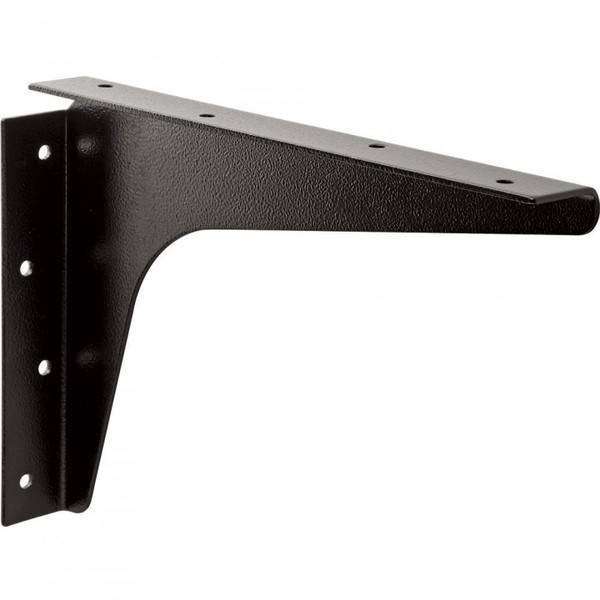 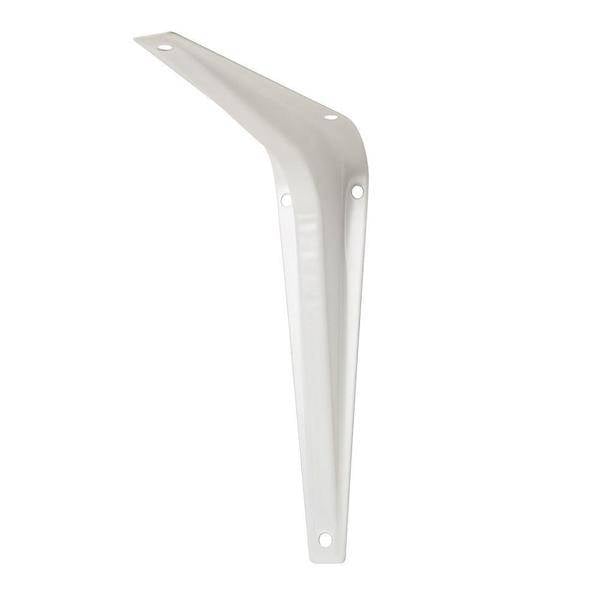 Also, could you comment on the 1/2 inch space that you show for about the bottom 3/4 of the support versus the wall? Why does it have to be away from the wall? It will be hard to keep it from rotating in toward the wall, although if you have good contact with that upper 1/4 and stiff bracing across the full support structure, it may end up working.
tbaron27

Thanks Berkeman.
I appreciate the info on supporting the bends, however the biggest issue I'm having is how to prevent the structure from rotating off the wall to the right (using orientation from drawing). In regards to the 1/2 inch space between the wall and the structure, that is due to the lip at the top of the wall. I figured I could put a spacer of sorts attached towards the bottom of the downward piece of the structure that would keep it parallel with the wall. But again, what I'm finding is that as soon as I put any type of load on it, the structure just pivots at the point of the bottom bend and the top just falls to the right and off the wall. Make sense?
Rive
Science Advisor

You need that clamp you mentioned previously. Preferably, it should hook to the other side of that wall.
You also need that spacer. Also, if it is some kind of foothold, then something to keep the shoe in place/preventing slipping.
300 lbs? I would say it is not for plastic.
tbaron27

The clamp I used was actually from the top of the lip on the wall to the bottom of the lip. In this clamping prototype I also got rid of the piece that runs along the top of the wall. For design purposes we need to assume that the width of the wall is infinite and therefore there is no way to clamp, latch or hook onto the back side of it. I just didn't know how else to draw it :-) Here is a 3D drawing that might help better grasp the concept. I added the horizontal bars to prevent side to side sway and to act as the spacer. Never mind, apparently it won't let me paste in the pic or attach it since it's a reply. Anybody know how?
berkeman
Mentor

tbaron27 said:
Never mind, apparently it won't let me paste in the pic or attach it since it's a reply. Anybody know how?

Use the UPLOAD button to upload PDF or JPG images, although you may need to be on a laptop or using a mobile browser, not the mobile App.
tbaron27

tbaron27 said:
the biggest issue I'm having is how to prevent the structure from rotating off the wall to the right

Can you put a 300 pound counterweight on top of the platform, a ways back from the face of the wall? If so, that will counter the torque that is trying to rotate the platform clockwise...
tbaron27

I thought of that but then it pretty much removes the portability factor :-(
berkeman
Mentor

In your PNG image, you show braces touching the wall near the bottom of the support. Is that not an option?
berkeman
Mentor

tbaron27 said:
I thought of that but then it pretty much removes the portability factor :-(

Fair enough. But you also said this:

tbaron27 said:
For design purposes we need to assume that the width of the wall is infinite

If you can extend the top plate (with vertical bracing pieces, right?) farther horizontally past the face of the wall that your support is near, that means you can use a smaller and smaller counterweight. A 50 pound counterweight would have to be how far from the fulcrum to counter the 300 pound weight held by the bottom of the support...?
jack action
Science Advisor
Insights Author
Gold Member

With the braces at the bottom, this is how your structure should be analyzed: 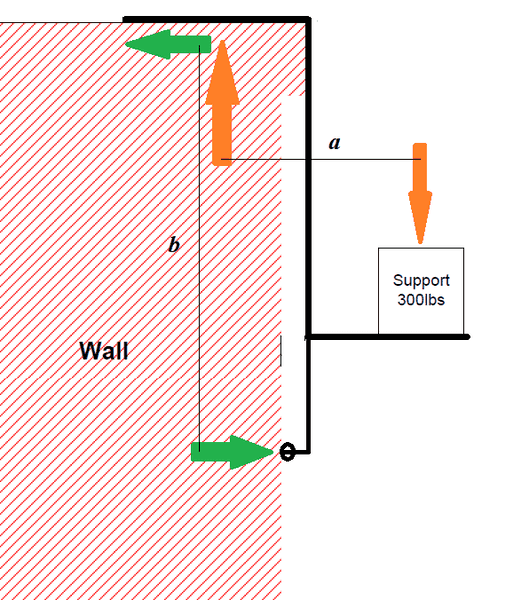 First thing to note is that you want to have the maximum friction force as large as possible. To do that, I designed the brace end as a roller to make sure it doesn't hold any vertical load (the total vertical load - 300 lb - will then be used to create the friction force). To other things you have to consider is using the highest possible coefficient of friction (using rubber for example) and increasing the normal force (clamping will help).

Assuming simple friction, then ##F_f = \mu W##, where ##\mu## is the coefficient of friction. Therefore:
$$\mu Wb=Wa$$
or:
$$b = \frac{a}{\mu}$$
So if the distance ##b## is smaller than this value, the friction force will not be high enough to prevent the structure from pivoting (no matter the weight). If it is greater, the maximum allowable friction force won't be needed, hence giving you a safety factor.

A better solution would be a coupling mechanism that kept the top piece in uniform contact with the top of the wall no matter the load, so you had the full contact area engaged for maximum friction force. I think there may be such a linkage mechanism that would work, but I'm an EE not an ME, so I'm having to think more about that...
tbaron27

Ok. Sorry to be so ignorant on some of this stuff but I promise I'm trying. And I am really appreciative of the help and great information.

Jack Action,
I'm trying to follow the math but am getting a little lost. I watched a couple videos to help understand friction formulas but so far, when it comes to my problem, the only thing I'm gathering is that the force of gravity, Fg = Mg = 300*9.81 = 2943N. I would assume that since the structure does not fall when no load is present then Fg = FN, and therefore the following must also be true when a load IS present, Normal Force, FN = 2943N. So if I use μ=Fg / FN, I'm still missing a variable in order to solve for μ. Am I thinking about this right? Am I missing something. Obviously I am :-) Any help?

Berkeman,
I think I understand the first approach. Are you saying to have a spring loaded hinge that creates an acute angle at the top? Then when a load is applied, the acute angle opens but not past 90 degrees? If I'm thinking about this correctly, then the Force equations would still need to be applied but the tension spring would cause a greater friction force correct?

As for the coupling mechanism, I'm not understanding the idea. Just can't picture it.

Again, thank you all for your help and information.
JBA
Science Advisor
Gold Member

Don't over estimate the benefit of a long top beam. Friction is a direct result of load and not of the area of contact. Your arm length should only be sufficient to insure a clean contact area on the top wall surface; and, insure the friction face contact area is large enough that the friction load does not damage the friction material or its adhesion to the the arm. A shorter wider top bar section is better than a longer thinner one.
Also, a thicker material for your vertical/top bar will result in less of a tendency for your top bend to open up and cause the back of the friction pad to reduce/lose contact with the wall top face.
jack action
Science Advisor
Insights Author
Gold Member

tbaron27 said:
So if I use μ=Fg / FN, I'm still missing a variable in order to solve for μ.

The coefficient of friction should be a given when you know the material and conditions that are involved. You can find typical values on many websites. This wikipedia page sums up the concept of friction, and you get some typical values as well.
berkeman
Mentor

tbaron27 said:
Are you saying to have a spring loaded hinge that creates an acute angle at the top? Then when a load is applied, the acute angle opens but not past 90 degrees? If I'm thinking about this correctly, then the Force equations would still need to be applied but the tension spring would cause a greater friction force correct?

Yes, the idea is to keep the top horizontal piece from rotating clockwise slightly under the torque from the load weight, because such a rotation disengages the contact with the top of the wall, which causes the structure to fall.
Share:
Share

T
Transfering power to a pulley attached to a rod

Calculate the clamping force to prevent the load from sliding