Knowing when to decompose weight vector vs. normal vector

Homework Statement:
Knowing whether there is a "correct" way to approach breaking down vectors by decomposing the normal force compared to the weight.

I have a question on Newton's 2nd Law regarding objects on a generic incline. Take for example, a car on a banked curve: 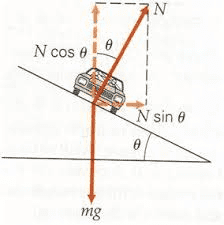 Here in the picture I've provided, you can see that the normal force has been decomposed into the x and y components via sine and cosine of the angle multiplied by N.

My question is.. is there a particular reason that seems to be the norm? When I was an undergraduate, I seemed to always be under the impression that the normal was strictly perpendicular to a surface, and instead, it was the weight vector that was decomposed with the coordinate system parallel to the tilted surface, like this: 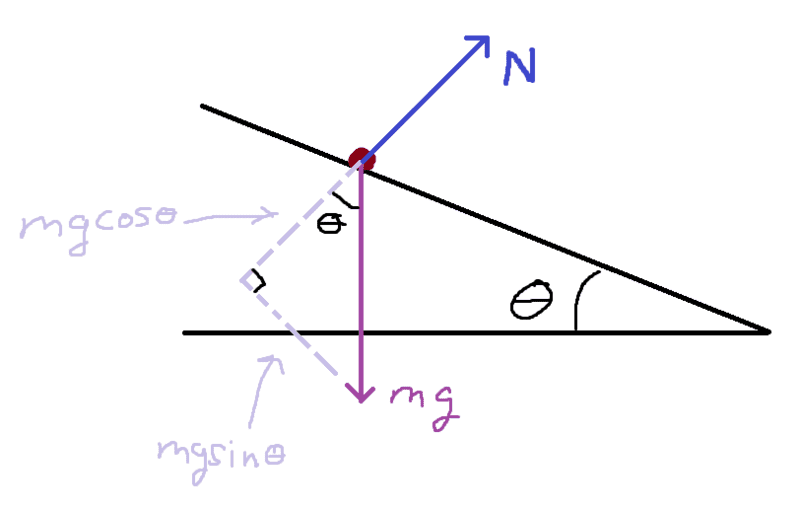 My initial thought was that these were equivalent ways of approaching the same idea. Just wanted to be sure.

First of all, the acceleration of the system will be the same regardless how you draw your ##x## and ##y## axes in terms of which you write your vectors. Nature doesn't know the alphabet. The rule of thumb is that if you have two-dimensional situations, as in the one above, you choose axes so that the acceleration is along one of the principal axes.

As an exercise, you might wish to (try and) solve either problem using different axes and see how much more involved it gets mathematically. Nevertheless, if you do everything right, the answer will be the same.
TRB8985

Great, glad to hear it.

kuruman said:
In the example of the car going around the curve, the acceleration is horizontal so the x-axis is along the horizontal

The centripetal (normal) acceleration is along the x-axis, the car might as well have tangential acceleration along the z-axis (perpendicular to the plane of the page). But yes in general we choose the axis so that the acceleration (normal or tangential) is along one of the axis.
haruspex
Science Advisor
Homework Helper
Insights Author
Gold Member
2022 Award

Suggested for: Knowing when to decompose weight vector vs. normal vector

Find the unit vectors perpendicular to the given vectors

Forces on a rope when catching a free falling weight
2

Suvat vector versus the scalar form
2

Potential vector of a oscilating dipole: