I know, volcanic eruptions arent that rare but this one started a few hours ago and there are live pictures from various local tv stations 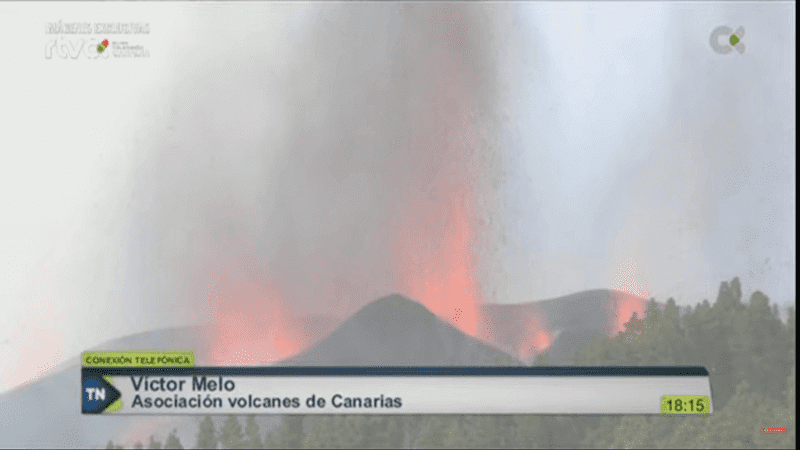 The Cumbre has a predetermined breaking fault. It would be interesting to know whether it is affected by the current outbreak or not.
mcastillo356
Gold Member

fresh_42 said:
The Cumbre has a predetermined breaking fault. It would be interesting to know whether it is affected by the current outbreak or not.

It would be very interesting to know. In fact it is the great underlying question, without undermining the great concern and uncertainty of these moments.
fresh_42
Mentor
Insights Author
2022 Award

This is a burning tree, not ashes. 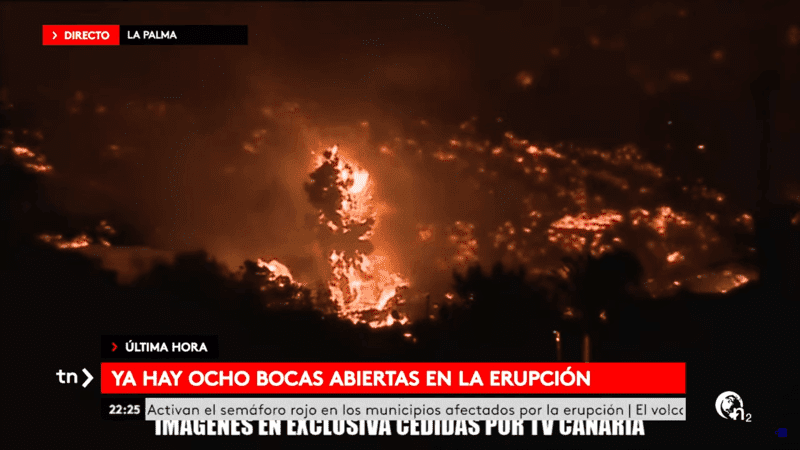 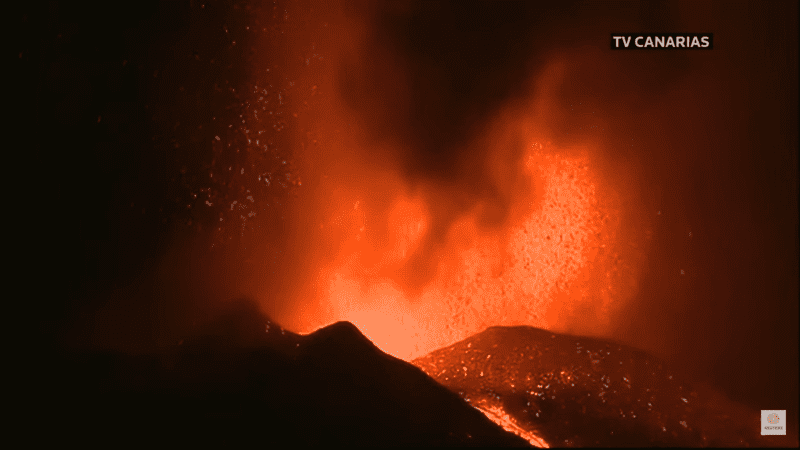 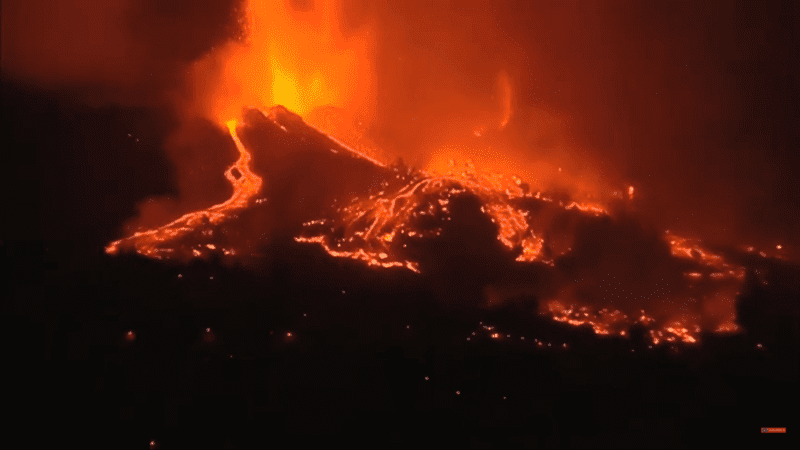 Updated live video link - that original one seems to have run its course (and I don't think I can edit after a certain time?)

The Canary Islands Volcanology Institute reported the initial eruption shortly after 3 p.m. near the southern end of the island, which saw its last eruption in 1971. Huge red plumes topped with black-and-white smoke shot out along the Cumbre Vieja volcanic ridge, which scientists had been closely watching following the accumulation of molten lava below the surface and days of small earthquakes.

La Palma is the island of concern with respect to a massive chunk falling into the Atlantic Ocean setting off a tsunami that could/would impact the Caribbean Islands and Atlantic Coast of US (North America).
https://en.wikipedia.org/wiki/Cumbre_Vieja_tsunami_hazard
rsk

The link to the live videos seems to change every now and then but it's still being streamed by local tv there.
A new fissure has opened overnight (with a rumble of 3.8) and another area has had to be evacuated, now around 6000 people. There've been some amazing but sad pictures of the lava engulfing homes.
Local tv link https://rtvc.es/en-directo/
rsk

La Palma is the island of concern with respect to a massive chunk falling into the Atlantic Ocean setting off a tsunami that could/would impact the Caribbean Islands and Atlantic Coast of US (North America).
https://en.wikipedia.org/wiki/Cumbre_Vieja_tsunami_hazard

There were articles alluding to this last week, before the volcano but probably in response to a series of tremors happening since the saturday before the eruption for example this

It sounds like one of those implausible worst case scenarios that wil never happen until you think of how many of those worst-case-never-happen scenarios have happened in the last two years.
anorlunda
Staff Emeritus
Insights Author

Astronuc said:
La Palma is the island of concern with respect to a massive chunk falling into the Atlantic Ocean setting off a tsunami that could/would impact the Caribbean Islands and Atlantic Coast of US (North America).
https://en.wikipedia.org/wiki/Cumbre_Vieja_tsunami_hazard

From the Wikipedia article:

Testing whether a given tsunami model is correct is complicated by the rarity of giant collapses. The term "megatsunami" has been defined by media and has no precise definition, although it is commonly taken to refer to tsunamis over 100 metres (330 ft) high.

Likely or not, statements like that attract lots of journalistic attention, and make Hollywood disaster movies. It's a certainty that a tsunami will hit the USA East Coast someday, and that an asteroid will collide with Earth, and that the Sun will expand to a red giant. So what?
fresh_42
Mentor
Insights Author
2022 Award

anorlunda said:
So what?

I will definitely be concerned if Yellowstone or Napoli reports a major eruption. And the Cumbre is interesting because his (existing) fault widens every time encapsulated rainwater is vaporized. So if the eruption took place near that fault, it meant an additional countdown to the major event.

I remember a television documentary in which an American geologist said, "If I lived in New York, I would certainly stay within range of a television."
anorlunda
Staff Emeritus
Insights Author

Allowing anxiety to influence behavior is what we used to call neurotic. Sitting by the TV waiting for the next disaster is an example of that. We don't use the word neurotic any more, but it's still a problem for modern man.

anorlunda said:
Likely or not, statements like that attract lots of journalistic attention, and make Hollywood disaster movies. It's a certainty that a tsunami will hit the USA East Coast someday, and that an asteroid will collide with Earth, and that the Sun will expand to a red giant. So what?

I don't think people should neurotically obsess over catastrophes portrayed by Hollywood, but certainly, if some major event is likely to happen, which could mean 1/100 to 1/100,000 years, or 10-6 years-1, one could or should be prepared, as much as one should be prepared for a Cat 5 hurricane or a 25 to 30 foot (8-10 m) tidal surge. It's a bit like having a tornado shelter in a region that is prone to tornadoes, or parts of California (or west coast) subject to earthquakes, or Seattle-Tacoma area prepared for an eruption of Mt. Rainier, or massive earthquake associated with the Juan de Fuca plate.

Not much one can do about an asteroid on a collision path with the earth, or the sun, but one can prepare for natural events, like weather or geological, and plan for advanced notice, as people do in Japan, sometimes. In the case of the Great Tohoku Earthquake of March 2011, many folks, including the government, ignored historic data that indicated the potential for such an earthquake and tsunami. The tremendous loss of life and incident at Fukushima Daiichi was entirely preventable, if folks had not ignored/neglected the evidence.
Astronuc
Staff Emeritus
Science Advisor

It's a tragedy for those affected but it's spectacular to see.
rsk

Data from Spain's National Geographic Institute shows how a series of small tremors began to take place on 11 September under a mountain range known as Cumbre Vieja, leading scientists to believe there could be magma pushing under the surface of the Earth.
This seismic activity gradually moved to the surface and, in the two days before the eruption, tremors were felt only 100m underground.

The Canary Islands Volcano Institute has suggested the eruption could last between 24 and 84 days.

the sound is coming from the volcano, isn't it? With a delay on the sound (hard to judge distance from the images)? I've telling myself it might be just wind but the sound intensity more or less matches the image and there's a tree in the foreground doesn' seem to be moving

No no no IGNORE ME! That's probably the sound of the Atlantic Ocean somewhere behind the camera.
rsk

The volcano has stopped, a few hours ago, with the lava flow still not reached the sea.
The experts say they don't know whether it's stopped temporarily maybe with magma & gases accumulating somewhere, or if it really is switching off.

Meanwhile, it's quiet in the Azores on the mid-Atlantic Ridge.

So, why all of a sudden is Cumbre Vieja erupting?

In the last couple of days the lava flow finally reached the sea and two more vents have opened up.

The live streaming of this really is spectacular (and possible unique?) - I can't imagine seeing anything to beat this.
rsk

Still going. Currently live pictures of lava flow advancing and burning all in its path. It's night time there so really does look spectacular and monstrous at the same time

Edited to add: No, they've changed the camera angle. Maybe the lava got too close

Read on a local newspaper (El Correo) on Bilbao, Biscay:

"... , the authorities declared yesterday ended the eruption of the Cumbre Vieja volcano"

Seem to be good news. Still waiting for more information. It had been 85 devastating days.

Seem to be good news. Still waiting for more information. It had been 85 devastating days.

I heared the announcement yesterday, and a statement that the eruption has destroyed 100s of buildings and cost more than $1 billion in economic (including property) losses. It will take time to understand the magnitude of the impact. I also wonder how long before the next eruption.
Share:
Share

Local Effects of a Kimberlite Eruption?

Why 80% of Americans Live East of This Line
2

Another Kīlauea Eruption seems to be beginning