Apparently it's there either because of God or the Devil.

Can we ask everyone in the vicinity to not use microwave ovens for sometime and then check the readings again ?
PWiz

Monsterboy said:
Can we ask everyone in the vicinity to not use microwave ovens for sometime and then check the readings again ?

But then how will the scientists concentrate without their instant noodles?
Chronos
Science Advisor
Gold Member

What is that scientific term I'm struggling to recall - poppycock, bullocks, or, ... interesting?
Monsterboy

PWiz said:
But then how will the scientists concentrate without their instant noodles?

wabbit said:
For Planck stars, if they (Rovelli & al.) can determine some unique enough signature of Planck star signals (didn't see that in the slides[,....])

We estimate the size of a primordial black hole exploding today via a white hole transition, and the power in the resulting explosion, using a simple model. We point out that Fast Radio Bursts, strong signals with millisecond duration, probably extragalactic and having unknown source, have wavelength not far from the expected size of the exploding hole. We also discuss the possible higher energy components of the signal.

Reception times from figure seven in second paper are random... the mean expectation of reception taken as number of FRB's/24h, is the best fit. Prime reception times are second just because they are closer to random. I think it would have been hard to explain to say the least why a particular local clock was subject to a specific signal pattern from a distance source, at any interval not diurnal, anyway. 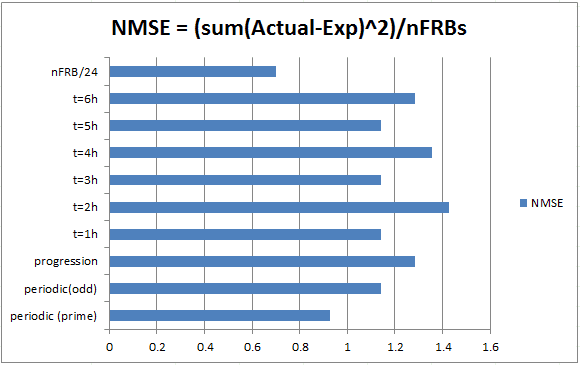 It's simple. Edgar Rice Burroughs was born in 1875. What do Aliens know from decimals ?
bahamagreen

This relationship is independent of units... it is fundamental number theory.

If the count number of FRBs at each integer multiple were equal to the integer value of that multiple, missed detections would account for the missing data - no detections violate this relation by their count exceeding their multiple, so far... which raises another question*.

If they find one FRB at unity multiple, a second FRB at multiple of two, or four more at multiple of five, etc., then things will get interesting.
But, if a subsequent detection is a multiple of three or four (hence their count exceeding their multiple), then the relation is broken.

Of course there may be other hypothetical relations** that would support just about any detection data, but I think my point is that we should be taking the existing data to predict the likely values of detection number 12... the relation above suggests that we should not detect any more at multiples of three or four because those are done, the rest need to be filled in... :) And we should be alert to any multiples greater than nine***.

* just how does one calculate probability of occurrence (as in the counts being equal to the multiples) and include incomplete counts that do not exceed the multiples? That is, the probability of the whole data set including the fact that no detections yet violate the relationship?

** even if there is a detection at multiple three or four to spoil the pattern, it may be that the overall pattern is cyclic - that is, the counts are meant to be accumulated for a period of time, then when the pattern is full it starts over... we may have staggered our detections through this start over time, so the counts won't look right until at least one full cycle... and we notice the reset point.

Maybe it's just me but I get the impression this thread is starting to sound a bit more like numerology than physics:)
rootone

@bahamagreen
With such a minute data set at there is at present, it is indeed possible to discover other hypothetical relations.
You can probably hypothesize dozens of them, any of which might be discountable with just one more observation.
You are definitely leaping in the dark with the assumption that extraterrestrials are interested in us and are trying to tell us something.
bahamagreen

I'm joking about the ETs...
rootone: "...any of which might be discountable with just one more observation." Exactly.
Hypothesis testing and prediction of subsequent data... we should not be passively waiting to find out what detection 12's multiple will be; we should be predicting it because the existing data seems improbably not random.

Even the microwave oven interpretation should be offering a prediction for the most likely multiple of detection 12...
rootone

Ah OK, I thought the ET speculation was a bit odd coming from you.
Dale
Mentor
Insights Author

And that seems like a good place to close the thread.
Log in or register to reply now!

Related Threads on Mystery of strange radio bursts from space

B No low-frequency emission from Fast Radio Bursts

B Fast Radio Burst Pinned Down to Giant Stellar Nursery

The thread thread: Strangeness of the expanding space paradigm
5

Mysterious signals from 1000 light years away