The circle ## x^n+y^n=1 ##, for n integer >2 in a metric space with distance function: ## \sqrt[n] {dx^n+dy^n} ## has corresponding trigonometric Sine and Cosine functions defined in the usual way.

Finding the sine or cosine of the sum of two angles, derivatives and curvature of a line in such a space is not analogous to the Euclidean space because dot product of vectors is not defined, but is easy and doesn't go beyond Elementary Calculus.

Do you know the name of those trig functions? Thanks.

Do you man like hyperbolic sin and cos? Or something else?

You might something in there references here under generalized trigonometry

What is meant by "in the usual way": power series, ratios, differential equations? E.g. for odd ##n## the circle isn't one, and thus the "usual" trig functions aren't periodic anymore. Or are we talking about complex functions?
dagmar

fresh_42 said:
What is meant by "in the usual way": power series, ratios, differential equations? E.g. for odd ##n## the circle isn't one, and thus the "usual" trig functions aren't periodic anymore. Or are we talking about complex functions?

Ok, my bad here, I should have said that the Sine of an angle is the y-coordinate when angle is the length of the arc of the circle ##
x^n+y^n=1 ##, as found by the integral of the distance function ## ds=\sqrt[n] {dx^n+dy^n} ## blah, blah etc. Quite elementary stuff.

What power series? What differential equations? One must define derivatives first, and this is done only when defining the sines and cosines of the sum of two angles first, but you don't expect me to go back to the basics again, do you?

I just thought that after 150 years since Riemann mentioned spaces with ## ds=\sqrt[4] {dx^4+dy^4} ## and 100 years of Finsler spaces these elementary trig functions, ought to have a name.
fresh_42
Mentor
Insights Author
2021 Award

You haven't answered whether real or complex, yet, but I assume ordinary real, as you refer to geometric constructions.

There is still the difference between odd and even powers: 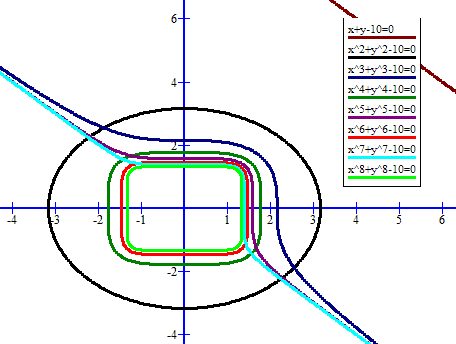 I never heard about this concept before, so I don't think there are specific names for it. However, you're right, shouldn't be that complicated to figure out the formulas. The metric is probably the most challenging aspect here.

I don't think real or complex, even or odd powers makes any difference either: For example, take the Minkowski plane and ##x^2+y^2=-1## curve. It looks like a hyperbola but has constant radius of curvature. As long as we've worked out formulae for our new curvatures in each metric space all the curves that you've plotted above would be "circles". By definition.
fresh_42
Mentor
Insights Author
2021 Award

I haven't used a metric. Those are simply the solutions of your equation for a couple of ##n##. The metric only comes into play when you define the sine and cosine by the ratio of lengths. But as all metrics are basically the same, I don't expect much of a difference to the 2-norm.
dagmar

fresh_42 said:
I haven't used a metric. Those are simply the solutions of your equation for a couple of ##n##. The metric only comes into play when you define the sine and cosine by the ratio of lengths. But as all metrics are basically the same, I don't expect much of a difference to the 2-norm.

I have to ask you, what is a derivative in this case? Well, ## [NewCosine(x+dx) - NewCosine(x)] / dx ##, but do you expect the formula for ##NewCosine(x+dx)## to be the same as in ##Cos(x+dx)##? It's not the same for ##Cosh##.
Similarly, there should be new formulae for the radius of curvature defined as a ratio of ds and the length of an arc of a unit circle ( this arc being defined by the two unit normals on both ends of ds taken on the unit circle in the same direction as on ds, the unit circle being defined by the metric each time) , then, the curves that you have plotted all will be having constant curvature. Oh, and the normals won't be normals in the Euclidean sense, since the dot product of vectors does not apply. I thought that dN (N being the unit normal ) would suffice for the calculations, but is dN tangent to the unit circle, in this case? I don't think so! It's harder than it looks...

Anyway, we are mathematicians. We can fill in the details.
Last edited: May 29, 2018
fresh_42
Mentor
Insights Author
2021 Award

I expect ##y+y''=0## to define the sine and cosine function if the corresponding initial conditions are set. It's the harmonic oscillation and therefore exactly what happens in a circle. The question whether this is an invariant for your suggested modifications or not seems quite natural to me. Thus it is very important how you define those functions in your model. You said in post #4

so you committed to a geometric interpretation which depends on the metric. Fine, that doesn't answer how harmonic oscillation or powers series (products) behave under these circumstances, but sets a basis to start with calculations.
Lawson

O
The period of trigonometric functions

A
Parity of inverse trigonometric functions