I am having some difficulty understanding the Pound-Drever-Hall frequency stabilisation technique, when locking a laser to a stable cavity.

As far as I understand:
This is where my understanding breaks down. Why mix this signal with the modulation frequency? I would have expected you to mix the output signal with the initial laser signal, such that the shift in phase could be determined and hence accounted for.

From what I've read, the two different frequency signals produce the beats phenomenon in the mixer, with an internal frequency (f0 + fm) and the envelope/amplitude frequency (f0 - fm). This is low-pass filtered to keep the (f0 - fm) component, and this is the error signal needed to correct the frequency emitted to correctly match the resonant frequency of the Fabry-Perot cavity.

But we want the error signal to be the difference between the resonant frequency and input frequency. I don't understand why we have used the modulation frequency/sidebands at all! Please answer using similar level of language as I have used here. I have attached a schematic of the Pound-Drever-Hall system from Wikipedia below.

Many thanks in advance! 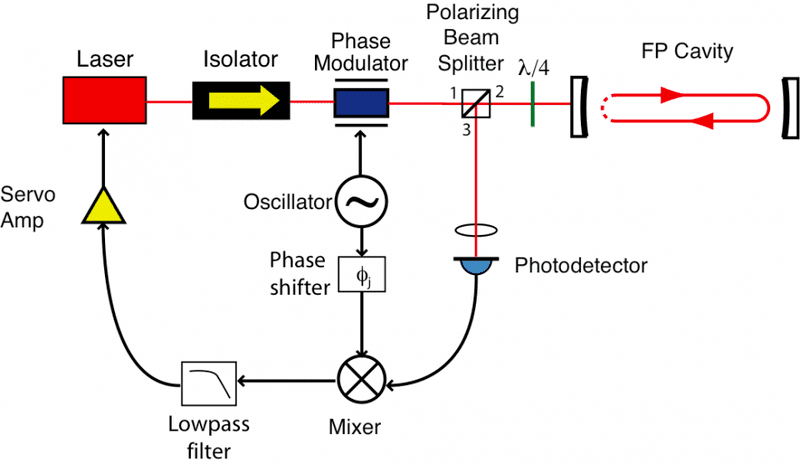 I don't think there is a good way to explain this without using a bunch of equations and plots and even then it gets complicated. Have you e..g looked at any of the review articles from LIGO? There are several, but at least one is a very good article aimed at "beginners".

Anyway, I believe the key point you are missing is that the photodetector is a square law detector. This means that the output signal from the detector contains products with all the necessary "information" at the modulation frequency. The square law detector is the key component here, the only function of the mixer is to down-convert the signal.
The mixer (which in some schemes can be a RF lock-in amplifier) will then output the error signal (which I would encourage you to plot, it can also be measured experimentally) which is zero when f0=fc and has a nice steep slope, meaning it is ideal for e.g. a P-I servo.
Share:
Share

I On the anomalous Hall effect

Theory of the STM technique

I Query on spin Hall voltage