Recently, I've been decapsulating chips and finding inductors printed on them, and I would appreciate some help in understanding their design. I'm used to inductors that look like this:

A circular coil of wire- the most basic geometry. Most of the inductors don't look like this, a more common geometry is this:

which I think is similar to a coil with multiple (opposed) windings. I don't understand the rationale for all the different shapes- circular, octagonal, square-ish:

Many of the inductors have elaborate 'bases' associated with them:

And there are a few that let the trace width vary, which is very odd:

Any insight would be very appreciated, thanks in advance.
Last edited by a moderator: May 6, 2017

The angular geometry (angles of 45°) is most likely driven by the crystallography of the substrate. Your 'circular' example is actually based on a regular 16-sided polygon (22.5° angles). The different geometries from the simple coiled loop to the concentric alternating loops tune the coil to different wavelengths/wavebands. Where the inductor features nested rings of different sizes, each ring is attuned to (resonates at) a slightly different wavelength, and combined they cover a waveband.
Andy Resnick
Science Advisor
Education Advisor
Insights Author

Thanks! Let me make sure I understand you:

All those coils can be characterized by a central frequency and bandwidth- the center frequency is given by the average radius and the bandwidth by the range of radii; the overall cross-section shape is fairly arbitrary (since the substrate is the same, especially for neighboring coils). The number of windings also affects the magnitude of the peak response.

My understanding is that the trace width is only related to the current-carrying capacity (via the resistance)- but you treat the overall coil as a series of single-turn coils, in which case I can (sort of) understand the relationship between trace width and center frequency for each single-turn loop.

The big yellow photo with four structures has two inductors on the left, but the two on the right look to me like transformers. Same with the yellow picture below it.
Andy Resnick
Science Advisor
Education Advisor
Insights Author

One very good reason for making "squarish" shapes is that they are much asier to simulate, simply because they are easier to mesh. It is much easier to design a coil with a given inductance (and stray capacitance etc) if the shape is computationally "simple".
Round shapes are a pain to simulate at high frequencies.

Another reason is simply that many software packages have built in colil-shapes that look like what you show (again, because they are easier to mesh) and many designers probably just use them because it is easier than drawing your own (I know I do)
AlephZero
Science Advisor
Homework Helper

f95toli said:
One very good reason for making "squarish" shapes is that they are much asier to simulate,

f95toli said:
<snip>
Another reason is simply that many software packages have built in colil-shapes that look like what you show (again, because they are easier to mesh) and many designers probably just use them because it is easier than drawing your own (I know I do)

That makes sense- looking at multiple versions of chips from the same manufacturer, there are common features- for example identical groups of coils/transformer elements, as if the designers simply re-used the same previously designed circuit blocks. That's what I would do, anyway....
dlgoff
Science Advisor
Gold Member

Thought you all would appreciate this one:

A 3-phase coil (I'm guessing). Is center bar is a ground? And what's with the antenna-type fins- they are almost symmetric... RF designers have all the fun :(
Last edited by a moderator: May 6, 2017
Andy Resnick
Science Advisor
Education Advisor
Insights Author

Another simple comment is that the pattern (and part thereof) is probably copyright.

Andy Resnick said:
And what's with the antenna-type fins- they are almost symmetric... RF designers have all the fun :(

Stubs?
Although they would have to be some significant fraction of the operating wavelength.
It is hard to tell what from the picture what the typical sizes are.
marcusl
Science Advisor
Gold Member

The fins closest to the coil are probably capacitors between the lines on top and bottom.
Enthalpy

Coils are less common on silicon because silicon has some conductivity that drops the Q factor, and worse, this conductivity isn't very reproducible and depends on temperature. III-V semiconductors, especially GaAs, suit coils far better, as the substrate uses to be semi-insulating, thanks to "compensation" doping, which is a deep level doping near the middle of the gap. On silicon, you better add a very thick layer of SiO2.

Silicon is essentially isotropic. GaAs and III-V not as much, especially if the substrate is stressed, but this influences the transistors, not so much the coils. A possibility is that patterning isn't isotropic, or that the design and polygon splitting software prior to mask production works less badly with 8 direction only.

Many coils shown here are symmetric, with a mid-tap and both halfs interleaved to increase the coupling. They pertain to a symmetric circuit, for instance a push-pull amplifier or a frequency tripler.

The inductance is more than the sum of individual turns, but it less than squares the number of turns because coupling is imperfect. Conductor width influences the ability to conduct DC current AND the resistance, the inductance and the capacitance, to the substrate and between the nearby turns, which often pertain to different windings for better coupling.

Some coils here are transformers. Where good coupling is desired, the windings must be interleaved, because the coils are flat hence spread the turns over much radius, and worse, any conductive layer beneath would reduce the coupling.

The bases look like an electrostatic shield that shall not short-circuit the coils, hence is slit perpendicularly to the turns to prevent current flowing in the shield parallel to the turns, like a transformer core is laminated. This might reduce the losses in a silicon substrate - the ones resulting from the electrostatic potential, not the ones induced magnetically.
Enthalpy

I bet this is a power amplifier that sums with no phase shift the outputs of three push-pulls. The central bar is the power supply, connected to the midpoint of the three coupled windings, whose ends land on the drains (or collectors) or the transistors.

Summing the outputs with some geometric angle also reduces the higher harmonics at the output, but the main goal must be to reduce the lengths
Andy Resnick
Science Advisor
Education Advisor
Insights Author

Wow- this is a ton of new information for me; most of it is (currently) well out of my comfort zone. One specific answer I can give is the approximate size of the coils, the trace widths are generally about 10 microns across and the coil diameters are a few hundred microns. Other that that, I have nothing to add until I learn more.

At the risk of boring everyone, maybe it would be helpful to figure out what the chips are and their function- here are images of the entire chip (scaled down) and the die markings: I should mention that I have not been able to figure out exactly what models any of these are. First, two from Qualcomm that came out of Blackberrys:

The second one has the designation 'Voltron', which I could find information about, but none of the other numbers match up. Texas Instruments made this one:

and this one was made by CSR and came out of a Bluetooth headset:

My decapsulation technique has improved enough to uncover something new (possibly baluns)- they came off a wireless PCB and are extremely delicate- I was shredding the gold foil previously. This i what they (sort of) look like- the gold square is about 1mm on a side, and the ferrous metal square seems to match up with the coils:

The coils are free-standing:


I also found a few of these (also about 1mm on the long side), but I have no idea what they are- any guesses?

I'm not sure how much better I can clean these- the (presumably) ferrite is dissolved by the acids, and as the gold parts dry, surface tension is enough to deform the structure.
Last edited by a moderator: May 6, 2017
Andy Resnick
Science Advisor
Education Advisor
Insights Author

You need a new pair of tweezers. 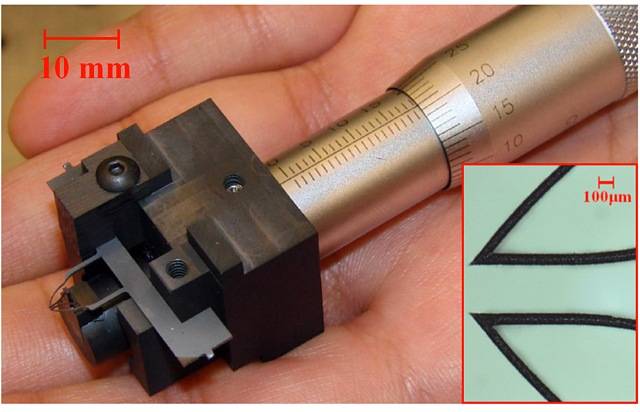 dlgoff said:
You need a new pair of tweezers.

Heh- no doubt! I work with lightly filed-down #5 Dumonts.
Log in or register to reply now!

Q-factor of an inductor

RLC Circuit with a Gyrator as an Inductor

Pure inductor (only) in AC circuit

Calculating q factor of an inductor