chiro said:
You do realize that the energy industry is a oligopoly? ...

How many oil and gas operators do you imagine exist in just the US? Globally?
aquitaine

Alesak said:
What about environmental and sustainability merits? Markets don't take into account either. I say we should spend money on renewable energy even if it's uneconomical, since there is no guarantee the markets will handle situation in a few decades when the oil starts running out.

Markets will react to depletion of resources only when it begins to happen, but imho it is too dangerous to wait for that. Why not leave some oil in the ground, just in case it's needed later?

Ok, for one thing it's a total myth that wind and solar are sustainable because they aren't. They only have designed lifespans ranging from 25-40 years on the outset. Given the amount of land these things take up and huge quantity of material we're talking about replacing, that doesn't sound very environmentally friendly or sustainable. After all, what are you going to do with the millions of tons worth of toxic waste from pv fabrication? We have things like clean air and clean water regulations to make the market pay attention to such things in a reasonable way.

Secondly, markets are flexible, governments are not. The reason wind and solar are not economical to supply electricity to the grid is that they have no competitive advantages, even against other non carbon sources. Besides, http://www.american.com/archive/2012/february/government-is-a-lousy-venture-capitalist/article_print [Broken] that they are not capable of making good decisions when they try and choose technological and scientific winners and losers. The worst example of this was Japan's MITI. Prices will start rising when supply and demand mismatches occur, and the spurs the development of alternatives. The bull goes up the stairs. Besides, do I really need to point out that wind and solar are not competing with oil?

Thirdly, that "peak" is much more like a plataeu than you think. Markets don't react in quite the way you imagine, for one thing it spurs development of better drilling technologies that permit more oil to be extracted from existing wells in addition to the recovery of oil that wasn't then economical beforehand, greatly extending the "depletion time". Realistically we're about a decade away from a battery that is competitive with a gasoline engine.

Planned production is not always a bad thing. Take, for example soviet economy. Even though in general it was quite poor nation, during WWII they managed to produce huge quantition of war machines, more than germans who had more advanced economy. It was because organizing production of only tanks and guns is technicaly doable, in contrast to producing millions of kinds of goods in peacetime economcy. I don't have online source, our teacher of economics history told us this.

Tanks and machine guns have no economic value at all, they are tools for political ends.


So why shouldn't electricity be produced in beraucratic manner? The organization of production seems to be purely technical problem, such as predicting power consumption(probably doable, as it is almost constant), calculating costs of production and choosing what kind of power plant to build and how big share of renewable energy should be(decided by weighting in costs and non-economical benefits).

Because energy is a market, war is not.


A technical department could simply say to politicians: if you want this share of renewable energy it will cost this much, and if you want this price electricity for consumers you will need to pay this much subsidies.

And this is why environmentalists are often accused of being socialists, because many of them are. Here's another example of central planning gone awry.
Last edited by a moderator: May 6, 2017
mheslep
Gold Member

Dickfore said:
... When you report figures for wind power, do you only report installed power capacity?

Yes, reports are given in peak installed power. Same for solar.


From that installed capacity, how much energy is produced per year?

Divide by ~3 for wind, by ~6 for solar on an annual basis. The figures obviously fluctuate quite a bit by season and location.
mheslep
Gold Member

Alesak said:
(probably doable, as it is almost constant), ...

The electric load has an average (like everything) but it is not constant, not even close. The load is also sensitive to cost, thus efficiency of the producer matters, thus competition matters, and we're back to no you can't centrally plan the entire electrical system.
Last edited: Jun 16, 2012
mheslep
Gold Member

Besides, have you considered what the results would be if you're wrong and energy prices don't spiral beyond what they are today? Really, based on what the fundementals are and what the global economic situation is likely to be in the next few years there is no reason to believe energy prices will increase significantly for the forseeable future....short of nuclear war in the mid east of course.

And even when it does recover, barring a major political event that disrupts supply it won't instantaneously go through the roof, it's a gradual increase.

The bull goes up the stairs, the bear jumps out the window.

The price of oil of course did not stay at the crash bottom of 2008. 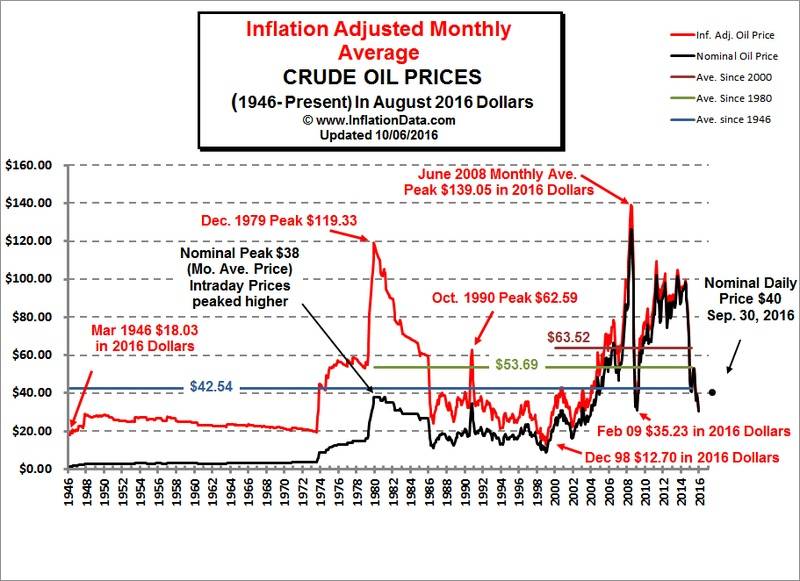 ...a critical point, because much of the N. American boom in oil production via fracking and tar sands oil would be marginally uneconomic if the price had remained at the 2008 bottom.
aquitaine

The price of oil of course did not stay at the crash bottom of 2008.

True, although it is still way down from what it was in 2007. Part of it is that the "next big economic slowdown" just hasn't occured yet. When it does we'll see prices go down again.


...a critical point, because much of the N. American boom in oil production via fracking and tar sands oil would be marginally uneconomic if the price had remained at the 2008 bottom.

Yep, pushing prices up somewhat, but again not nearly up to $140 a barrel.
Astronuc
Staff Emeritus
Science Advisor

Some interesting discussion here on energy and energy independence.

T. Boone Pickens is one of the first speakers after Thomas Friedman, who is the panel moderator.

One point that is made is the intermittency of renewables, i.e., wind and solar. There are also interesting comments regarding China's approach to energy supply.

How to cash in on the renewable energy boom