I'm having some trouble with a concept in group theory. I'm reading Howard Georgi's book on Lie Algebra, this is from the 1st chapter. Really sorry to have to use a picture but I don't know how to TeX a table: 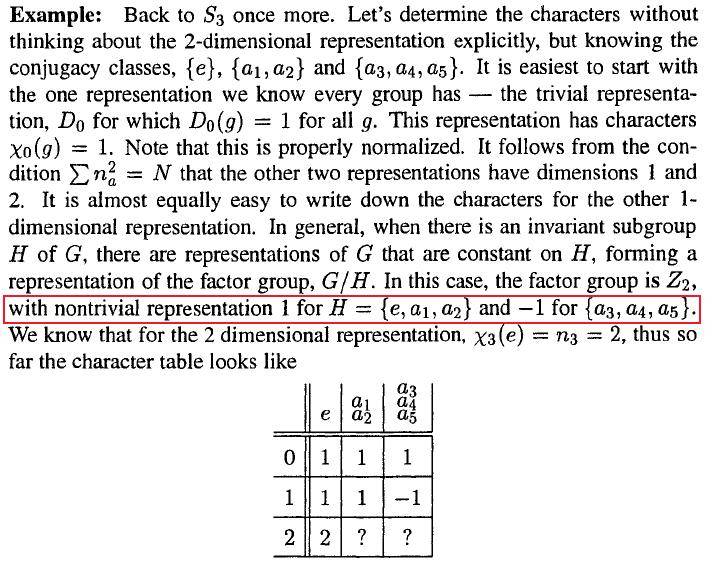 There's a couple things I dont quite understand but mainly, I don't see how he knows the representations for the factor groups are 1 and -1. Infact, I dont really understand where he gets the second factor group H={a3,a4,a5} from. Is it a distinct coset from H={e,a1,a2}?

I find this whole subject quite a challenge so really any help you can give will be greatly appreciated. Sorry again for picture, and thanks for helping.

From years ago, I have 12 pages of fairly decent notes getting to your problem with Georgi on the characters of S3. The path was indirect and tortuous.

Firstly, I wouldn't have been able to read Georgi successfully without first having worked my way through "Groups, Representations And Physics," 2nd. ed., H F Jones.

My path went like this: As a undergrad physics major, I first took an elective sophomore level course in modern algebra for kicks using, "Modern Algebra, An Intdroduction", 2nd. ed. by John R. Durbin.

During graduate school I ran into the Jones text and saw that it seemed readable. Before running into Jones, I had taken a junior and senior course in algebra, and a full year of gradaute algebra from the math department--useless for a physicist it seemed. I add this comment about my algebra background because one Amazon reviewer from 2003 (a grad physics student) gave up on Jones as too lacking in details. This reviewer turned to pure math books on algebra. The Amazon reviewer of Jones may have a point, but I think a sophomore level algebra book is good enough to fill in the blanks in Jones. This is what I did, review my sophomore level group theory in Durbin, before pressing on through Jones. I remember getting stuck for a week on various sections of Jones, filling in missing steps, but by p. 73, I was able to construct character tables (Chapters 1 - 5 Jones = discrete groups).

To read Georgi, you'll also need to read the chapters in Jones on continuous groups, which is the rest of the book. Then, years later, I ran into Georgi, and working it was a pain in the arse, side-by-side with my Jones text/notes.

The next level: I'm am now I'm my third reading of "Lie groups, Lie Algebras, and some of their Applications," by R. Gilmore. It adds in the topology to the above Durbin, Jones, Georgi algebra. It's really essential and "completing" material for the physicist, connecting Lie's work with its forgotten history: the analysis of flows in partial differential equations, and not just the popular areas of today for particles and fields.

To reach a very deep understanding of guage fields, I'd read "Geometry, Topology and Physics" by Nakahara. It's more algebraic topology in a different vein that the Durbin, Jones, Georgi, Gilmore sense.

Going back through my notes, I can see that it would take me weeks to answer your question easily.

I hope this is hepful, if not immediately satisfactory.

I linked up all the math/physics texts and key ideas that helped me understand theory at
https://www.physicsforums.com/showthread.php?t=540829
Last edited: Nov 6, 2011
Share:
Share

How can second Schur's lemma lead to inequivalent representations?

The representation matrix for alpha and beta in Dirac equation