[/B]
ZnS crystalizes in the B3 type structure with the space group is F¯43m. This structure is shown below and can be regarded as the bi-atomic form of the diamond lattice (F d¯3m). Upon applying a force along the [1,1,1] direction, the crystal might experience a change in its length by ∆l/l = 10^(−6) .

(a) Demonstrate that in the unperturbed lattice the dipole moment (p = e · b) is zero, where b is the distance between the charged atoms.

(b) Calculate the dipole density (dipole moment times density of the dipoles) in the distorted lattice under the assumption that in this ionic crystal the charges are equally distributed, i.e. Zn+S−, and that the distances between the atoms remains constant (just changes in the bond angles). The lattice constant of ZnS is a = 5.432 ˚A. 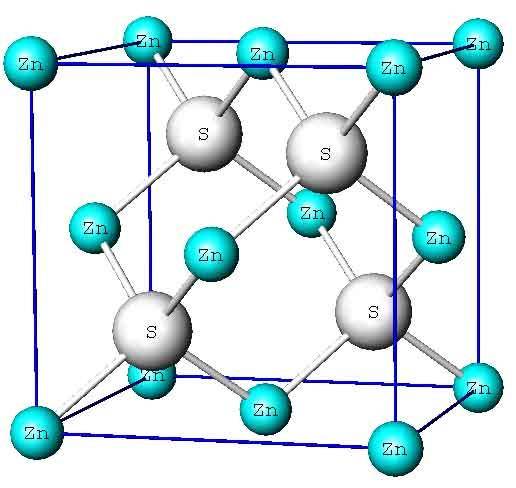 2. The attempt at a solution

For part a. I just abstracted the unit cell as four tetrahedrons, and proved that since a tetrahedron is centrosymmetric, it doesn't have a dipole moment , hence neither does the unit cell.

For part b. I'm a bit lost. At first I thought a contraction in the [1,1,1] plane without a change in bond lengths would just mean that the bond angle between the three 'base' zinc atoms and the one zinc atom in the [1,1,1] plane would get smaller and induce a dipole in each of the tetrahedrons, and so you could calculate the dipole density by multiplying the dipole moment of each tetrahedron by 4/a3 (since there's four tetrahedrons in the volume of a unit cell with volume a3). But it gets complicated pretty rapidly, mainly when you're trying to get a quantitative value of the dipole moment itself.

I feel like I'm missing something, is there some information I can derive from the space group that means I can simplify the process?

As concerns part A, I would say that a dipole moment is absent because there are several rotation axes C3. You can see this through analysing the character table of the symmetry group. The dipole moment can not exist when there are more than one Cn axes because it can not have more than one directions (http://www.reciprocalnet.org/edumodules/symmetry/pointgroups/use.html#Dipole)
Regarding part B, I am a bit confused as well. It is said that the size of the lattice increases when the force is applied but it is also said that the distances stay the same and we need to analyse only a change in the bond angles....
Log in or register to reply now!