The Peak Day of a Very Active Atlantic Hurricane Season

It's pretty crowded out there: 4 disturbances and 2 tropical storms.
I have never seen so much activity. Here is a screen shot (from 9/11/2020): 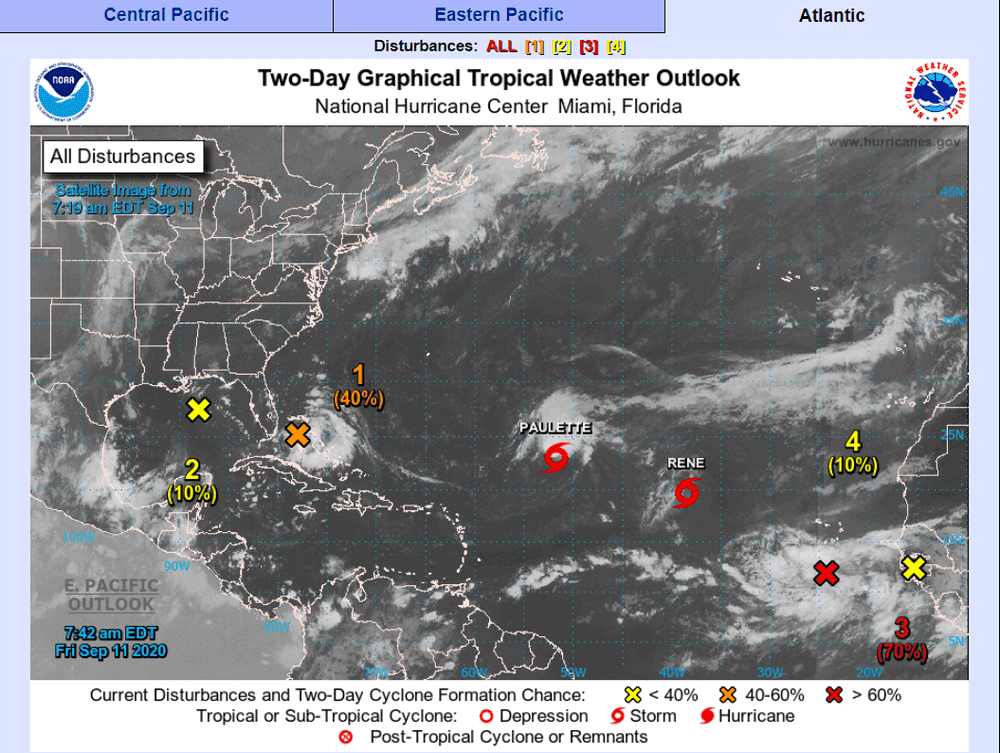 If there are more storms (and this is just the middle of the season), they will be: Sally, Teddy, Vicky, Winfred, Alpha, Beta, Gamma, ...

If we make it to Zeta, it will match the 2005 season.
When a hurricane causes exceptional damage, its name is retired.
That has never happened to a Greek letter storm.
Last edited: Sep 11, 2020

Yikes! I’ve never seen the bigger picture map like that.

I remember a NOVA show on a plane disaster that mentioned how the pilot attempted to fly around one massive storm only to run into a secondary storm behind it instead of turning back. It never occurred to me at the time that two storm systems could be in such proximity as is shown in your snapshot.
Halc

.Scott said:
If we make it to Zeta, it will match the 2005 season.
When a hurricane causes exceptional damage, its name is retired.
That has never happened to a Greek letter storm.

The greek storms cannot be retired, as there are no other names to replace them.

Thus you might have exceptional storms in consecutive years with the same name.
jedishrfu
Mentor
Insights Author

There are many alphabets around the world to choose from or you could start naming storms using the greek gods, norse gods... but I guess they would have to amend their naming system to allow it.
.Scott
Homework Helper

Halc said:
The greek storms cannot be retired, as there are no other names to replace them.

Thus you might have exceptional storms in consecutive years with the same name.

Per the World Meteorological Organization:

The only time that there is a change in the list is if a storm is so deadly or costly that the future use of its name on a different storm would be inappropriate for reasons of sensitivity. If that occurs, then at an annual meeting by the WMO Tropical Cyclone Committees (called primarily to discuss many other issues) the offending name is stricken from the list and another name is selected to replace it. Infamous storm names such as Mangkhut (Philippines, 2018), Irma and Maria (Caribbean, 2017), Haiyan (Philippines, 2013), Sandy (USA, 2012), Katrina (USA, 2005), Mitch (Honduras, 1998) and Tracy (Darwin, 1974) are examples for this.

I don't see any exemption for lettered storms ... however ...

The WMO website makes no mention of Greek-lettered storms at all.
And from the description, "meteorologist" only assigned the WMO the very narrow task of maintaining the six-year list of available storm names. So, if a Greek letter ever makes an infamous name for itself, it would seem that "meteorologists" will have to address that when it happens.

So far, lettered Atlantic storms have only occurred in 2005 - and none have ever qualified for retirement. But the 2005 season certainly demonstrated that it was possible. The storm just before Hurricane Alpha (October 22, 2005) was Wilma (October 15, 2005) and not only was "Wilma" retired, it remains the most intense Atlantic storm ever recorded (882 mbar).

I think its just a matter of time before a lettered storm is retired.

During the conference, there was considerable discussion on the usage of the Greek alphabet and if those names could be retired if one proved to be particularly damaging or deadly.[167] The committee decided that the usage of the Greek alphabet had a major important political, economic and social impact globally, which might not have happened if a secondary or circular list of names had been used.[167] As a result, the committee decided that the Greek alphabet would be used again if the traditional naming list was exhausted, and that it was not practical to retire a Greek letter. Storms named with Greek letters that would otherwise be eligible for retirement would appear in the retired name list, but have a notation affixed with the circumstances.[167]

The mid-Atlantic has become a storm factory. We're up to seven tropical disturbances: 4 named storms, 1 developing depression, and 2 others - all at the same time. 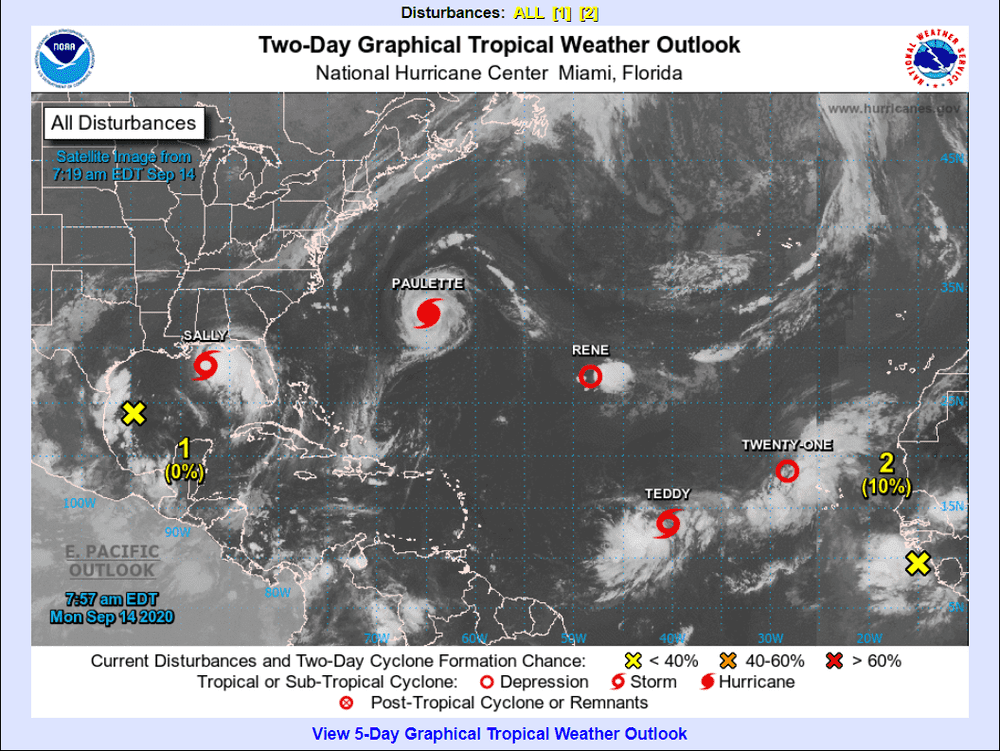 Why gravity on earth is very strong on the north atlantic ocean?

A lost world in the Atlantic ocean?

The First Snow Fall of the Season

Seasons are due to the tilt of the Earth. Really?

What causes the weather? (not the seasons)
2