Thesis in search of university, regarding Carnot and Kelvin

Greetings,
A Thesis regarding the historical accuracy of portrayal Sadi Carnot and Lord Kelvin's work seeks a University.
It is based largely on the images below (note highlighted areas), taken from their original work.

As you know, Sadi Carnot and Lord Kelvin are the fathers of the science of thermodynamics.
The moderator has cautioned me not to express my opinion on this forum, as he considered it not mainstream.
I presume the fathers of modern science are suitably mainstream.

References: Carnot, Sadi "REFLECTIONS ON THE MOTIVE POWER OF HEAT AND ON MACHINES FITTED TO DEVELOP THAT POWER", and Thompson, Sir William (Lord Kelvin) "AN ACCOUNT OF CARNOT'S THEORY", New York: Wiley and Sons and London: Chapman & Hall, Limited, 1897.

Thanks to www.archive.org for the scan of original print copy of "REFLECTIONS ON THE MOTIVE POWER OF HEAT". 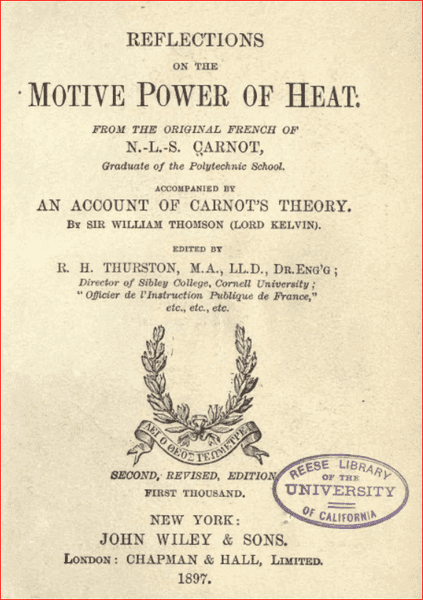 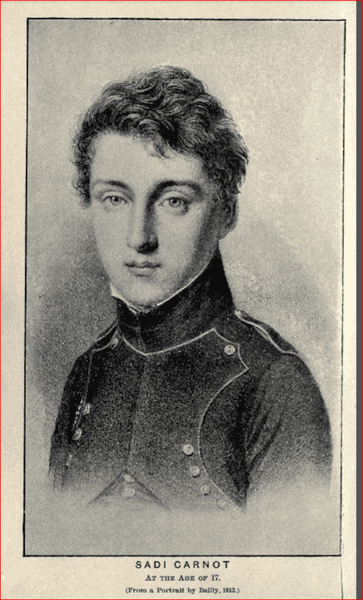 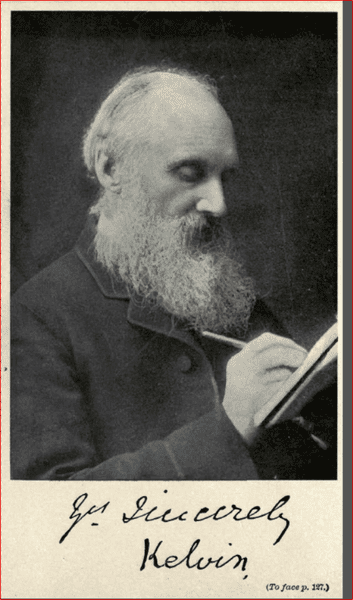 It's not clear what is going on here.

Are you saying you have written a thesis and are looking for a publisher, or what?
MrBi11

SteamKing said:
It's not clear what is going on here.

Are you saying you have written a thesis and are looking for a publisher, or what?

yes, thanks for asking.

Apparently I cannot discuss the thesis contents on this forum, but I would point out that Lord Kelvin said as highlighted above:

Kelvin wrote "29* Either the steam-engine or the air-engine, according to the arrangements described above, gives all the mechanical effect that can possibly be obtained from the thermal agency employed. For it is clear that in either case the operations may be performed in the reverse order, with every thermal and mechanical effect reversed" (page 161 and 162).
Kelvin adds footnote "* This paragraph is the demonstration, referred to above, of the proposition stated in 13, as it is readily seen that it is applicable to any conceivable kind of thermodynamic engine." (page 161)
Kelvin's theorem is "Hence it is impossible to have an engine which will derive more mechanical effect from the same thermal agency than is obtained by the arrangement described above; since, if there could be such an engine, it might be employed to perform, as a part of its whole work, the inverse cycle of operations, upon an engine of the kind we have considered, and thus to continually restore the heat from B to A, which has descended from A to B for working itself; so that we should have a complex engine, giving a residual amount of mechanical effect without any thermal agency, or alteration of materials, which is an impossibility in nature. The same reasoning is applicable to the air-engine ; and we conclude, generally, that any two engines, constructed on the principles laid down above, whether steam-engines with different liquids, an air-engine and a steam-engine, or two air-engines with different gases, must derive the same amount of mechanical effect from the same thermal agency. (page 163)

Lord Kelvin's published work is significantly different from what is taught today in introductory thermodynamics of heat engines.

I am interested in finding a University which would consider my thesis for post graduate work, and/or
a science publication that is able to consider publishing findings which show evidence such as Lord Kelvin's actual work, un-modified by time.

Having read their work several times, I believe that in spite of having an incorrect model of heat which prevailed in the 1800's,
Carnot and Kelvin got everything of substance exactly right.

If you are interested in details, I can be reached at [e-mail address deleted by mod].
Last edited by a moderator: Dec 13, 2014
Dale
Mentor
Insights Author
2021 Award

MrBi11 said:
I am interested in finding a University which would consider my thesis for post graduate work

I don't know how things work in history departments, but this isn't the way that scientific academia works. In science a student would find a lab which is already pursuing research on a topic of interest, join that lab, and work with the head of the lab and the department to research and produce the thesis.

I.e. a thesis is part of an organized masters or doctoral program, not simply a book randomly selected and subsequently published by a university.
Share:
Share

Related Threads on Thesis in search of university, regarding Carnot and Kelvin

Schools How to get other university thesis?

Question regarding research (related to research topic and writing thesis)

N
Regarding topics for thesis in Quantum Mechanics(for MS phy)

Thesis or no thesis