cianfa72 said:
So this notion of "at rest" is actually w.r.t. a coordinate system.

cianfa72 said:
What about the notion of "being at rest" w.r.t. another body ?

In flat space-time, there is relative velocity -- the velocity of the one body in the [momentary, inertial] rest frame of the other. If this is zero then the objects are at rest relative to each other.

There is a different notion which might be used. Have you Googled "born rigidity"?
italicus

Hello to every body. I’ve found the attached image among my old draft papers, which I used in a conference to illustrate the so-called twin paradox: 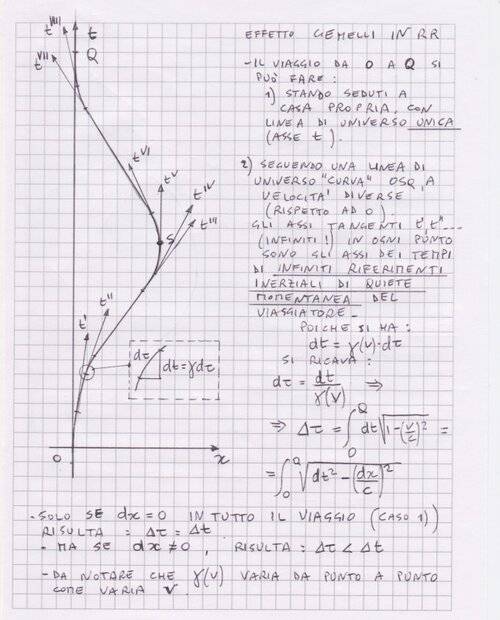 Do you have difficulties with Italian ? In short , the test says that , in the flat spacetime of SR (no mass- energy that causes curvature) , one can go from event O to event Q in two (or more...) ways :

1) staying at home, sitting in a very comfortable arm chair, (but let’s ignore for the moment that the Earth is not an inertial RF , from the point of view of relativity) , and just letting proper time (wristwatch time) flow. So, OQ is a piece of geodesics. Spatial coordinate x doesn’t change.
2) moving from O to Q along a curved universe line OSQ , that can be approximated by a succession of short segments , during which the speed maintains constant , and varies from piece to piece. Axes t’ , t” ...are the instantaneous time axes of the MCRFs which are tangent to the curved universe line.

Then, mathematics and physics formulae don’t need to be translated. Fortunately , their language is (or should be) universal and well understood by everybody.
In the end, the result is that the integral of proper time along the curved universe line is shorter than the coordinate time from O to Q : the geodesics OQ , on the time axis of the stationary twin, is the "longest time line” . No paradox, then .

Sorry for my bad English.
cianfa72

jbriggs444 said:
There is a different notion which might be used. Have you Googled "born rigidity"?

AFAIK in SR it is related to the hyperbolic motion (basically the spacelike distance as measured from a family or congruence of objects accelerating with constant proper acceleration).
Last edited: Jun 21, 2021
Share:
Share

I Time-dilation and Aging

I On proper time

I Time dilation for photons

B Time dilation - what is the time on the Earth?

I Making stationary the proper time

I Definition of Proper Time In General Relativity

I Proper time in a curved space
2

I Time dilation in a gravitational field