So i'm a bit confused about the properties of wave mechanics, and trying to understand certain phenomena, which may be talked about, but I've never seen anyone talk about it.

Here is the example. We have a bowl of water, a stick and a ball. We start with the ball, in which we drop it into the water. The ball creates a sinusoidal wave along the surface.

We take the stick now, and run it through the bowl in a straight line from one end to the other. instead of a sinusoidal wave we get...well fairly complicated movement, but of note we get two, cyclonic and anticyclonic turbulence patterns. 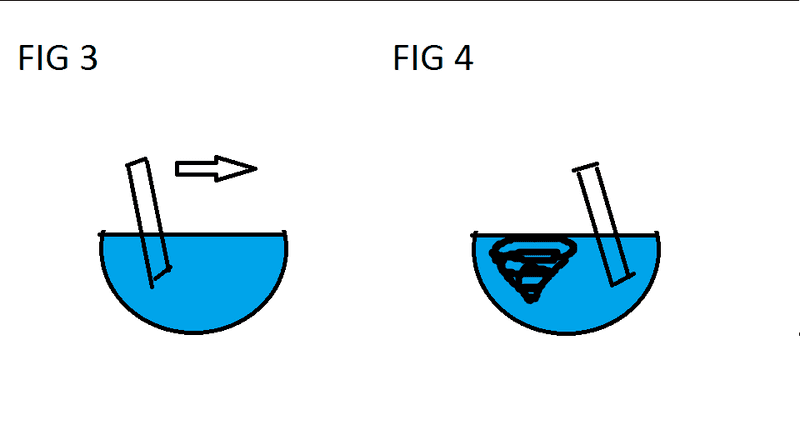 Now here is where i take the leap of my understanding and jump off the cliff. We don't really see cyclonic behavior in quantum mechanics, we only see what i like to call "the surface" in which the probabilities are distributed in the manner of the first example, where we see an interference pattern.

The question now is why do we not see turbulence patterns in quantum mechanics? I can't put my finger on it, but both examples seem to have the same dimensionality, in which both patterns could be seen from any direction, with the exception that Fig2 dominates the surface, while fig 4 dominates the bulk.

I didn't want to dive into speculation, but i feel like the metaphor here, is that one can think of a particle as dropping it into a bowl of probability. in this bowl, it has a certain wave function that determines it's locale and momenta. What we can only see is the result on the photographic plate, which is just the surface of that water.

But "under the hood" is a sea of probabilities we can't see, one where the behavior is chaotic just like the cyclonic behavior. The follow up question here is, am i describing the complex field?

I'm no expert, but will say the following. If I'm wrong someone will correct me and a satisfactory answer will arise.

Fluids exhibit phenomena like viscosity, capillary flow, surface tension and surface adhesion, because fluid molecules "stick" to the sides of containers, and each other, due to inter-molecular forces. The "cyclonic" behavior you mention depends on the bulk properties of fluids, as with convection, vortices etc. So the simple linear wave equation for surface waves is only an approximation to more complicated reality. Turbulence arises from the interplay of such forces, as summarized by Reynolds number. It's essentially non-linear.

Now the analogy in QM to fluid flow would be probability flow, as you say. But "probability" is not made of molecules. In QM probability is a pure mathematical entity with no bulk properties; its linearity is not an approximation to something deeper (as far as we know). Therefore no turbulence, viscosity or any of those non-linear fluid characteristics.

There are speculative theories where probability (and QM in general) is modelled as the result of "deeper" phenomena. In particular Bohmian mechanics exhibits something very like turbulence. But at the moment its predictions are too subtle to be reached by experiment so it is only an interpretation of QM. Still, Bohm's causal ontology is the closest I can think of to what you're envisioning, so you might want to check it out.
Demystifier
Science Advisor
Insights Author
Gold Member

Turbulence happens due to the non-linearity of the fluid Navier-Stokes equation. Quantum mechanics is simpler in that sense by being governed by the linear Schrodinger equation.

I'm not sure what do you mean by that. In Bohmian mechanics waves satisfy the linear Schrodinger equation, so there is no turbulence at the level of waves.
secur

Demystifier said:
I'm not sure what do you mean by that. In Bohmian mechanics waves satisfy the linear Schrodinger equation, so there is no turbulence at the level of waves.

First let me mention that I'm not proselytizing the causal ontology. For me, Copenhagen (or similar) is good enough. Also please remember I said it was "like" turbulence. But ...

It's generally understood that Bohmian mechanics is an "interpretation" of QM, therefore mathematically identical. But that's not really the case. Bohm does make different predictions but they're not testable at this time, so effectively it's just an interpretation. But under the hood there's a lot going on.

The quantum potential is explicitly non-local and constitutes active information which guides the particle's motion. But the energy for the particle's motion does not come from the QP; Bohm speculates it may come from vacuum energy. The particle therefore does not conserve energy or momentum at the detailed level; but its departures are, as far as current experiment can measure, within the HUP bounds. And the QP's guidance can be influenced by any conditions throughout the universe (i.e. non-locally).

All this means that the resulting motion can be non-linear, at least as far as we can tell. To see that the guidance conditions are linear (if they are) we may need to know the state of the entire universe; to see that energy is actually conserved (if it is) we may need to know the detailed energy budget of the vacuum. Thus as far as we (or, Bohm) can tell the particle engages in "jiggles", sudden changes of course, which appear thoroughly non-linear.

"There is however a critical trajectory, which divides the trajectories that go through from those that do not. This evidently resembles a bifurcation point of a kind which is typical of the non-linear equations describing unstable systems. Indeed it is clear that even though the equation for the wave function is linear the quantum potential can be a highly non-linear function of the coordinates of the particle. Therefore we actually have an example of such a bifurcation point ... implying something close to chaotic motion."
Demystifier
Science Advisor
Insights Author
Gold Member

secur said:
To see that the guidance conditions are linear (if they are) we may need to know the state of the entire universe

Yes, I was trying to slide by that point. Thanks for keeping me honest!

OP is asking about "turbulence patterns in quantum mechanics". His question is phrased mostly in terms of "probabilities", and we answered in terms of the wave function whose modulus squared gives the probabilities, in the usual interpretation. But Bohmian mechanics goes beyond that by ascribing motion to the particle which is certainly not determined in any simple fashion from the (admittedly linear) wave function. The usual probabilities are recovered statistically, but the particle's motion can be chaotic. So Bohm is very relevant to the spirit, if not precisely the letter, of his inquiry.

The alternative to ignoring the distinction between "probability wave" and particle trajectory, was to get into details I felt were not relevant at this time. Recommending Bohm - e.g. "Undivided Universe" - is, I believe, a correct approach. He'll find exactly what he's interested in: turbulence-like conditions arising from (hypothetical, of course) phenomena "under the hood" of the wave function - and in the process learn all about the relation between linear wave function and non-linear particle position.

So I was trying to avoid "TMI" (too much information). If you parse my words precisely you'll see there are no actual wrong statements: I'm covered by such phrases as "something like" or "close to"; "QP guidance conditions" not "QP wave equation", etc.

Sometimes you have to gloss over fine points or you'll never get anywhere. I never gave a lecture where every statement was precisely correct. Of course I made unintentional mistakes, but also intentional ones. First get the main idea in the student's head; then s/he can understand the real facts. If you insist on exactness you'll never get past "Hello I'm Prof. secur and I'll be teaching you Math 231, Differential Equations" (Actually secur is not my real name, just a handle; and this is actually a room in Feld Hall, "Math 231" is a mere label; and in fact towards the end of the course we'll touch on PDE's; and the first couple of weeks is really remedial 2nd-semester calculus in disguise; and for 2/3 of you I won't be "teaching" just talking, because I can't teach if you don't pay attention - which you won't; and some of these lectures will actually be given by grad students, while I'm off to a conference in sunny San Diego; and ...")
Log in or register to reply now!

A Can the wave function show turbulence?

I Impact of atmospheric turbulence on secret key rate in QKD