What are the currents at each resistor?

1. The problem statement, all variables 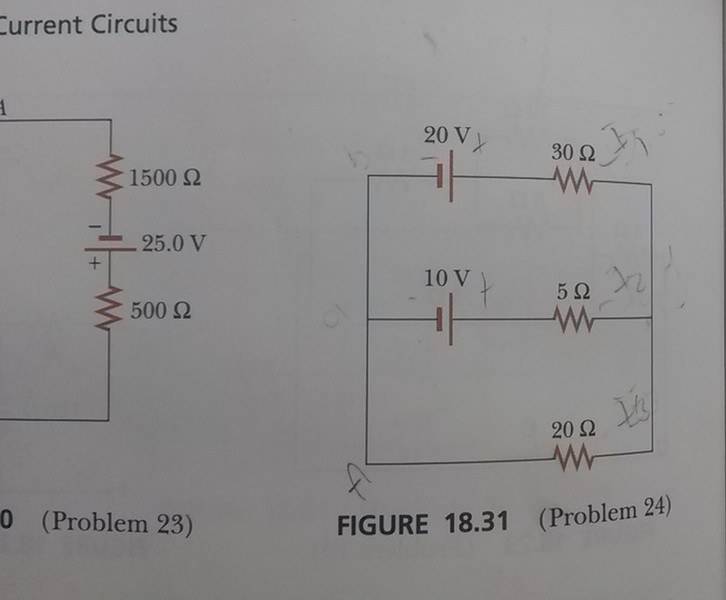 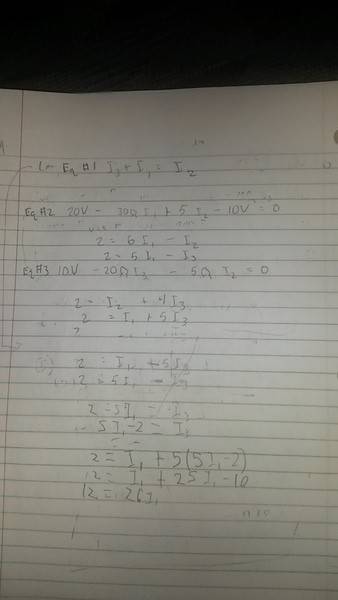 Hello and welcome to PF!

It is very important to specify the directions that you are assuming for each of the three currents. Otherwise, there is no way for us to check the signs in your equations.

For each equation you should state whether it comes from a junction rule or from a loop rule; and, tell us which junction/loop corresponds to each equation.
chuvacjoe

That's probably where my mistake is at, but I3 counterclockwise, I 2 counterclockwise, and I 1 counterclockwise? This is the part I'm a little confused about because I've been learning kirchoff's rules from a book and khan's academy. They all flow to the closest stronger volt source?
TSny
Homework Helper
Gold Member

It would be clearer if you specified ##I_1## as to the right or to the left through the 30Ω resistor. Similarly for the other two currents. On your circuit diagram, these directions should be indicated with arrows.
chuvacjoe

Note that the equation I1 + I3 = I2 would have also resulted from taking I1 to the left, I3 to the left and I2 to the right.

Let's look at your loop equation for the top loop. You wrote

It is important to note that you generally will not know ahead of time the correct directions for the currents. That is part of what you will determine when solving the problem. But, the nice thing is that you can assume any direction you want for any of the currents. If your initial choice of direction for a current turns out to be wrong, then you will get a negative answer for that current. The negative sign indicates that the current is actually in the opposite direction from what you initially assumed.

So, for example, if you end up getting I2 = -4 A, then the current I2 will be 4 A in a direction opposite of what you initially chose when setting up your equations.

But it is essential to make an initial choice for the direction of each current and stick with that choice while setting up the signs in your equations.
Log in or register to reply now!

Related Threads on What are the currents at each resistor?

Find the Current Flowing through each resistor

Current through each individual resistor of a circuit

Circuit Questions -- Electrons flowing in wires and a resistor

Calculating the currents in each resistor

Find the current in each resistor.

Finding the current and voltage for each resistor

Finding the current on each resistor

Calculate the current in each resistor

Current through each resistor

Finding current for each resistor at different times