Where can i get more info on this formula? (trailer towing force)

I need to use this formula for a physics prac (my dad an engineer told me it).
F = Weight (normal) x friction coefficient x diatmer of axle)/diamter of wheel
x4 cause the trailer has 4 wheels.

Can anybody point me towards a source of info on it, in particular the derivation.
I use it to calculate the tension force acting between a truck and a trailer.

I have not seen that formula either, but I want to point out that if the trailer is being pulled by a truck on level ground, the pulling force on the trailer without slippage of the tires does not depend directly on static or kinetic friction but rather on rolling resistance and axle bearing friction. The formula your dad sites might be an empirical formula based on tests. For example, if the diameter ratio is 1/12 and static friction coefficient rubber on pavement is 0.6, then equivalent resistance coefficient is 0.05 which might be in the ballpark, and the pull force at constant speed is 0.05 W times 4, where W is the weight on each tire. Of course, if you had my old Columbia bike with lousy tires and worn bearings, that value would go way up. Just guessing here, though.
CWatters
Science Advisor
Homework Helper
Gold Member

I think the formulae makes sense if "friction coefficient" refers to the bearing friction. I think that would explain the inclusion of the ratio axel/wheel diameter.

However to that force you also need to add other forces such as that due to rolling resistance and air drag.
CWatters
Science Advisor
Homework Helper
Gold Member

Just to explain what I mean...

If you assume constant angular velocity then the net torque sums to zero. So if the bearing or axle friction acts clockwise then friction between wheel and ground must act anticlockwise. These two torques must sum to zero.

Likewise the linear forces must also sum to zero so

If you rearrange that lot you should get the original equation. 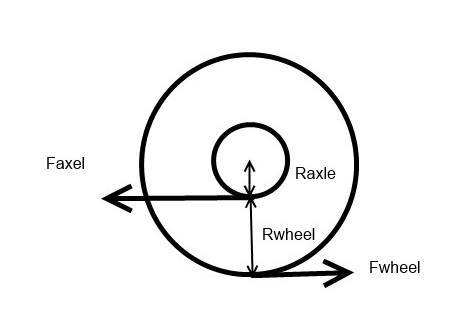 Related Threads on Where can i get more info on this formula? (trailer towing force)

I Forces applied to trailer hitch

Can there be more than Four Fundamental Forces?

Is the math getting more complex?

Advantages of a trailer

SWL to secure engine onto a flatbed trailer

Looking for info on Bremsstrahlung

I don't know how to elaborate on this question any more, and I don't