Why do photons interact with e- but not with other photons?

Phys12 said:
two electric fields can interact with each other (for instance, two charges being brought close to each other will either repel or attract)

This isn't two electric fields interacting. It's two charged particles interacting, with the electromagnetic field (there is only one EM field) mediating the interaction.

No, it isn't. It's an excitation of the quantum EM field.

If you want to limit discussion to classical EM waves only, we can move this to the Classical Physics forum. However, since you posted this in the Quantum Physics forum, I'm assuming you want to use quantum electrodynamics to analyze the problem. And in QED, photons are not EM waves; the things you're used to thinking of as classical "EM waves" are actually particular states of the quantum EM field.


Phys12 said:
if two electric fields can interact with each other

There is no such thing as "two electric fields". There is one EM field--a quantum field, if we're using QED. See above

Because the quantum field theory, QED, of the EM field is linear. (The corresponding classical statement is that the classical Maxwell Equations for the EM field are linear.) For a field to be self-interacting, its field equation must be nonlinear.
vanhees71
Science Advisor
Insights Author
Gold Member
2021 Award

It's not entirely true that the electromagnetic field doesn't interact with itself. It's true on the classical level provided you insist on Dyson renormalizability for QED, because there's no way to write down a four-photon interaction term in the Lagrangian which is gauge invariant without involving derivatives, and the allowed ones all involve coupling constants of mass dimensions less than 0 and thus are superficially non-renormalizable.

Now in usual QED, i.e., the theory with a charged Dirac fermion (electrons and positrons in atomic physics) there are the "box diagrams" providing a four-photon vertex. This consist of four external photon lines with four fermion lines making up a loop (usually drawn as a square, that's why the diagrams are called box diagrams). Alltogether there are 6 such diagrams, contributing to the four-photon vertex, and all 6 must be taken together to get a useful result.

The important thing is that each of the diagram is superficially divergent with superficial degree of divergence 0 (logarithmically divergent). If this was really the case then QED would be non-renormalizable, because you'd need a counter term in the Lagrangian of precisely the forbidden gauge dependent form. Fortunately gauge symmetry provides strong constraints on the proper vertex functions, the socalled Ward-Takahashi identities, and these tell you that the four-photon vertex is in fact convergent, i.e., the forbidden couplings are strictly 0. So there is indeed a finite four-photon vertex, implying that there is photon-photon scattering, but it's awfully small since there are four vertices in these diagrams and thus the cross section is of order ##\alpha_{\text{em}}^4##.

There is some indirect evidence for this process in gracing (i.e., ultra-peripheral) Pb-Pb collisions at the LHC.

Note that the linked Nature Physics article is open access (as all publications of LHC experiments).
Phys12

Is there an answer which can be understood by someone who hasn't had a lot of QED? I am a junior in college, have had Classical Mechanics and E&M (Physics I & II), some relativity, and quantum mechanics (only touching on wavefunctions, normalizations and operators). I've also read the first 3 chapters of Introduction to Particle Physics by Griffith's.
PeterDonis
Mentor
Insights Author

Phys12 said:
Is there an answer which can be understood by someone who hasn't had a lot of QED?

There is no other way to talk adequately about photons than QED. Everything else is a waste of time. The good news is that to learn QFT and QED is fun. It's even addictive. A good textbook is

PeterDonis said:
Because the quantum field theory, QED, of the EM field is linear.

Only the equations for electrodynamics with a classical external current are linear.
Last edited: May 22, 2018
PeterDonis
Mentor
Insights Author

I was using the word "linear" in a more restricted sense. The "bare" QED Lagrangian is linear in the sense that its only interaction term ##\bar{\psi} \gamma^\mu A_\mu \psi## just has one power of the EM field ##A_\mu##. In other words, there are no first order two-photon processes, i.e., no vertex where multiple photon lines meet.

But there are, as you note, nonzero contributions to the photon-photon scattering amplitude from higher-order processes; the diagrams for these processes involve multiple vertices, at each of which there is just one photon line. (@vanhees71 made a similar point in post #3; as he notes, the actual amplitude for photon-photon scattering, taking into account all of the higher order processes, is very small.) I agree, in the light of both of your posts, that QED is nonlinear in this sense, and that this sense of "linear" vs. "nonlinear" is more appropriate for this thread.
Vanadium 50
Staff Emeritus
Science Advisor
Education Advisor
2021 Award

I-level, people. I-level. Does anyone think the OP's problem is that it's not complicated enough?
bhobba
Mentor
Insights Author

Classically - because Maxwell's Equations are linear there is no interaction. But in QM things are different - there is a slight interaction:
https://en.wikipedia.org/wiki/Two-photon_physics

This however is beyond what you would have studied so far - but to start you on that journey see:
http://www.physics.usu.edu/torre/3700_Spring_2015/What_is_a_photon.pdf

To explain spontaneous emission (I know you did not ask about that but please bear with me) you need whats called Quantum Field Theory as the above explains. When you work you the consequences of that there is a slight interaction.

I also have to mention classically light of course has energy. Thus it is a source of a gravitational field via General Relativity - it has a stress energy tensor. Hence light can also interact that way but it is very very weak:
http://www.lares-mission.com/ILSW2012/talks_2012/ILSW2012_Vilasi.pdf

But since this was posted in the QM section I felt you would be more interested in what QM says about it.

Vanadium 50 said:
I-level, people. I-level. Does anyone think the OP's problem is that it's not complicated enough?

What do you mean when you say not complicated enough? I do not understand most of the things said in post #2 and #3
PeterDonis
Mentor
Insights Author

Phys12 said:
I do not understand most of the things said in post #2 and #3

A shorter version would be that, classically, EM waves don't interact because Maxwell's Equations are linear, which means you can add any two solutions (such as the solutions describing two EM waves) to get another solution. That means two EM waves will just pass through each other unchanged.

Quantum mechanically, photons can interact with each other, but only via indirect means (a heuristic description would be that the interaction has to involve the creation of at least one virtual electron-positron pair that then annihilates itself, turning back into photons), so the interaction will be very weak--far too weak for us to be able to actually observe it directly (although there is some indirect evidence for it, as @vanhees71 noted in post #3).

Also, your OP had two misconceptions in it, which I tried to correct in post #2: it is not true that the interaction between charged particles is "two electric fields interacting", and quantum mechanically, a photon is not an EM wave: "EM wave" is a classical concept. As I said in that post, if you're interested in classical EM waves, this discussion should be taking place in the Classical Physics forum.
Derek P

Phys12 said:
What do you mean when you say not complicated enough? I do not understand most of the things said in post #2 and #3

He was being ironic. People are making it too complicated.
A. Neumaier
Science Advisor
Insights Author

PeterDonis said:
Maxwell's Equations are linear, which means you can add any two solutions (such as the solutions describing two EM waves) to get another solution.

You are talking about the free (homogeneous) Maxwell equations in vacuum, describing only the electromagnetic field without sources.

The full Maxwell's equations are linear equations with source terms, and the superposition principle takes a different from from what you describe.

Moreover, (like in QED) the sources are coupled to the field by nonlinear equations. Thus even in classical electrodynamics, the superposition principle is violated by small terms coming from the interaction with matter.
PeterDonis
Mentor
Insights Author

A. Neumaier said:
You are talking about the free (homogeneous) Maxwell equations in vacuum, describing only the electromagnetic field without sources.

Yes, that's correct, I should have been more specific. If we're talking about "EM waves" classically, these are the appropriate equations.
Keith_McClary
Gold Member

From an AAAS Science article:

If a 100-PW pulse can be focused to a spot measuring just 3 micrometers across, as Li is planning for the SEL, the intensity in that tiny area will be an astonishing 10^24 watts per square centimeter. ... At intensities around 10^24 W/cm2, the field would be strong enough to start to break the mutual attraction between some of the electron-positron pairs, says Alexander Sergeev, former director of the Russian Academy of Sciences's (RAS's) Institute of Applied Physics (IAP) in Nizhny Novgorod and now president of RAS. The laser field would then shake the particles, causing them to emit electromagnetic waves—in this case, gamma rays. The gamma rays would, in turn, generate new electron-positron pairs, and so on, resulting in an avalanche of particles and radiation that could be detected.

If you take into account quantum mechanics, isn't it the case that photons do interact, weakly? (By "weakly" I don't mean via the weak interaction, but not very strong...) The Feynman diagrams for two photons includes processes like this: 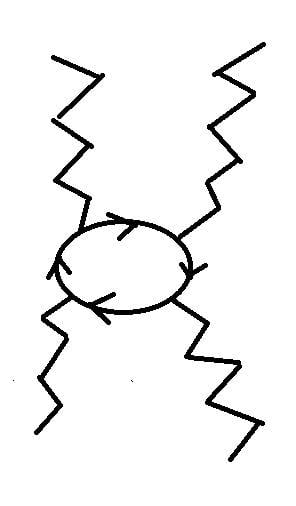 PeterDonis said:
This isn't two electric fields interacting. It's two charged particles interacting, with the electromagnetic field (there is only one EM field) mediating the interaction.

Phys12 said:
Oh yeah. At first when the photon-photon-electron vertex was brought up, it threw me off too. Now that I see it as something shown to prove why it wouldn't make sense, I can see why you'd have a virtual electron mediating the process.

Contrast this with the colour interaction of nuclear physics, which is mediated by gluons. Gluons do carry colour charges, and thus they interact with each other (e.g., glueballs) in a theory of just the gluon field.

In terms of mathematics, the electromagnetic gauge group is U(1), i.e., a group of numbers, while the colour gauge group is SU(3), i.e., a group of matrices whose elements do not (in general) commute with each other. This mean that a part of the field Lagrangian that involves a commutator vanishes for the electromagnetic field (doesn't have electric charge), but does not vanish for the gluon field (do have colour charges).
kent davidge

George Jones said:
the electromagnetic gauge group is U(1), i.e., a group of numbers

would you mind elaborating a little bit more on this

so how does the vanishing of a commutator in the Lagrangian implies the non-interactivity?

also, the usual Lagrangian for the electromagnetic field seems not to have any commutators in it.
Share:
Share

Related Threads on Why do photons interact with e- but not with other photons?

Do photons interact with gravitons?

Do photons interact with neutrons?

B Why do photons only interact with charged particles?

K
Why photons don't interact with the Higg's field

E
Electromagnetic waves with regard to photons

How do photons interfere with each other/themselves?

L
I Quantum information -- Why do photons interact weakly with their environment over long distances?

Do photons of different energy interfere with each other?

Do photons collide with each other like any other massive object?