okay, so I'm working on a prototype for a hover bike. The end design will have a 600cc engine and hopefully impressive stats. Currently I'm working with a 49.5cc moped engine. The skirt design is pretty straigt forward as is the thrust and steering.

I'm having some trouble determining what type of fan I can use and how big of a fan I will need.

I'm hoping to use a fan similar to a floor blower. I don't know the name of this type of fan but I'm going to call it a "scoop fan" until someone corrects me.

The idea is to use a single fan to create lift and thrust. The "scoop fan" will be mounted in the rear like the back tire of a motorcycle. This will then be boxed in and vented to direct air flow through two openings, one down into the skirt and frame to create lift and the other out of the rear of the craft for propulsion and steering. (I realize this may not be enough power to accomplish both and that's something I'm willing to work with in a later design. Currently I'm concerned with lift and stability.)

Any comments or suggestions are welcome. Especially if you know where I can find fan blades that fit the description above. (Not something I'd like to have to fabricate)

There are hoverbike videos online. Here's one:

One fan won't work as there are stability issues;

and this dual setup:

You might be able to contact these folks and learn about where they got their stuff.
Maugrimm

I've seen both of those. The stability issues come from his open frame design and the fact that he isn't using an air skirt.
The skirt creates a perimieter for the air cushion and distributes it evenly under the entire craft. ( http://www.explainthatstuff.com/hovercraft.html ) The design has some impressive attributes but it's a big toy. I'd like to be able to pick up groceries or ride with someone.

My design is probably closer to a small hover-craft vs. a "hover bike" but let's break it down, phrasing. If it has handle bars and a bike seat I'm calling it a bike. No closed cockpit, and the end design will ride like a jet ski or quad-bike. It's a bike. lol

Think of how a bike tire is mounted to the frame. I'm tryihg to use a fan that is mounted like that chain driven, exactly like a bike tire. The design on those in the videos is using prop fans and aiming them downward to create lift. The lift on my design will come from the skirt and If I'm lucky enough to have the extra power the thrust will come from a vent on the same fan in a different direction.
The image below shows, roughly the "type" of fan I need. Granted, i just need a larger version of the blade in this fan, not the entire unit.
A prop fan works like a ceiling fan and blows air from the face. These little guys throw air sideways off the tips of the blades. The two main differences I've noticed are the angle of the blades and the housing around them.

My thought is take a larger version of the blad in this carpet dryer fan and have two vents instead of one. The primary vent will feed the air skirt and provide lift and the smaller secondary vent will run out of the rear and hit a rudder for steering. 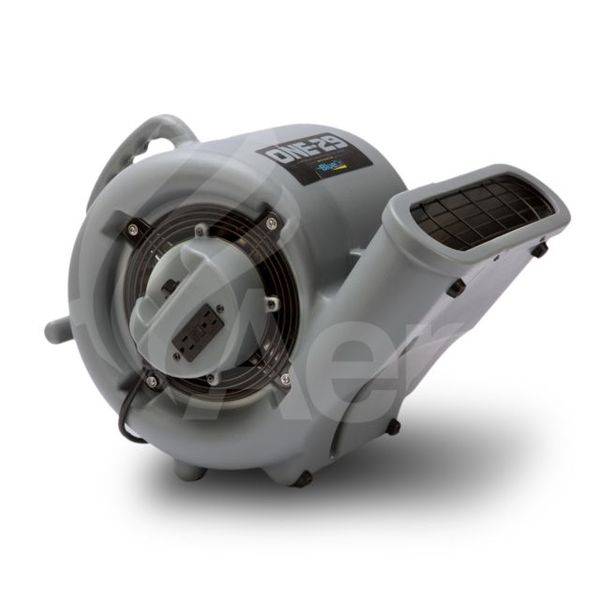 Youtube is a wonderful resource for questions like yours. I searched "DIY hovercraft" on youtube and found many videos. This one may be close to what you plan.

Have you done any basic calculations on this? I could imagine the required skirt size to keep you from toppling either side to be prohibitively large.
russ_watters
Mentor

There are calculators online, but you don't really need them: lifting force is pressure times area. For airflow, use Bernoulli's equation to find the velocity and multiply the skirt perimeter by how high off the ground you want it.
russ_watters
Mentor

rumborak said:
Have you done any basic calculations on this? I could imagine the required skirt size to keep you from toppling either side to be prohibitively large.

I'm not sure what "prohibitively large" is, but I think hovercraft are self leveling.
rumborak

Hovercrafts are, but hovercrafts are also intentionally spreading their load evenly across the skirt, and as low to the ground as possible. OP's idea is a very different setup (if I understand it correctly), where the center of mass is reasonably high off the ground, and solely on one line. That will create a good amount of torque on the skirt, making it all the much harder.
Share:
Share

I Print something to be seen in focus by person w/o glasses?

I What type of problems do you like the most?

B According to current physics, is vacuum still something or nothing?
2

B Electrons, quarks and gluons made from something or nothing?
3

B Something else besides force?

I Is it physically possible to climb up a building like this?

I Most Ridiculous Papers You've Ever Read