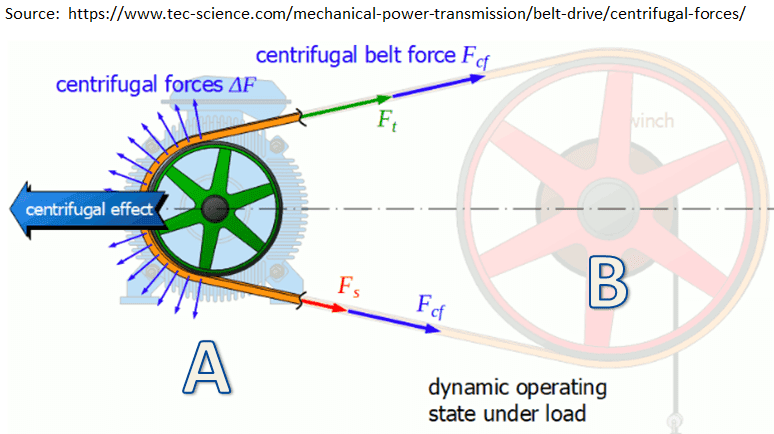 MPavsic said:
Is Centrifugal force on pulley A static or dynamic force?

Here it is an inertial force (in the D'Alembert sense, not in the non-inertial frame sense).
MPavsic

A.T. said:
Here it is an inertial force

if the sum centrifugal forces acting on the belt are not zero?

For this to occur, the belt would need to slip because it leaves the surface. See this link which shows the effect with a chain. There is no normal force from the edge of the beaker. The weight of the chain causes it to fall and the centrifugal force accounts for the radius of the curve.
MPavsic

sophiecentaur said:
the belt would need to slip because it leaves the surface

I learned this lesson the hard way when one of my ideas did not work. But that is a story for another time.
A.T.
Science Advisor

MPavsic said:
In my theoretical model, the belt does not leave the surface of the pulley, because it is pre tensioned.

If your model insists on 'enough' tension to maintain contact then doesn't that exclude the net centrifugal forces being non zero?

Aamof, your original statement of the situation is a bit too vague and I am not too sure about your definition. What centrifugal forces are you actually discussing? My link about the chain waterfall shows a temporary equilibrium situation where the radius of the curve is just right to balance the two tensions.
MPavsic

sophiecentaur said:
If your model insists on 'enough' tension to maintain contact then doesn't that exclude the net centrifugal forces being non zero?

Jrmichler, I will do your prescribed homework soon.

I am dancing around this problem quite some time, beside problems with patent clerk; I decided to go public as far as I safely can to solve this mystery. I am a self-learner.
MPavsic

jrmichler said:
Note also that the belt friction equation assumes that there is enough normal force and friction to prevent slipping

I did shorter research.
In my model the preload tension is just enough to run just a belt over the pulleys with constant speed. The idea is that friction is necessary only on the driving pulley. The load on the belt is represented only by belt itself and some additional load is created when the belt is crossing from one pulley to another at very shallow angles (5deg in average, total sum of crossings = 90deg.).
In the model I have calculated absolute acceleration of the belt particles. That include:
- Vector sum of normal forces (centripetal accelerations) of the belt when running over pulleys.
- Vector sum of ‘Collisions’ when the belt touches the pulley and leaves the pulley at shallow angles.
The result is that vector sum of absolute acceleration of the belt on driving pulley is greater than vector sum of absolute accelerations of the belt on the other 3D positioned pulleys.
The article “Preload with consideration of centrifugal forces” is explaining that centrifugal compensating forces in the belt are always present regardless to amount of friction between the pulley and the belt.
Is my thinking correct?
sophiecentaur
Science Advisor
Gold Member

Why not? As soon as a section of the belt stops circular motion, there is no centrifugal force.

MPavsic said:
centrifugal compensating forces in the belt are always present regardless to amount of friction between the pulley and the belt.

The centrifugal force is only dependent on the mass, the radius of rotation and the angular velocity. Also, friction forces are orthogonal to the centrifugal forces. That chain example has circular motion without any friction.
MPavsic

sophiecentaur said:
The centrifugal force is only dependent on the mass, the radius of rotation and the angular velocity

I Translational force of a pulley

Normal acceleration of the Belt on the Pulley

B Relating displacements in a pulley system

I Virtual work and constraint forces

B Buoyancy and External Forces
2