Interesting article on bicycle physics and researchers who've investigated it:

cool article, thanks. I was hoping it would go into a detailed explanation of the physic of "counter steering" (something I studied on a 650 Bonneville years ago) I was a little disappointed that the concept was only mentioned once, however the rest of the article made up for that.
jedishrfu
Mentor
Insights Author

I think the article is good for identifying whose doing what so you can find out more or instead revel in riding your bike and knowing its actively solving an equation you can only dream of solving.
OCR

Lol, I sure as hell wanted one though... dreamed about them, all the time...[COLOR=#black].[/COLOR] 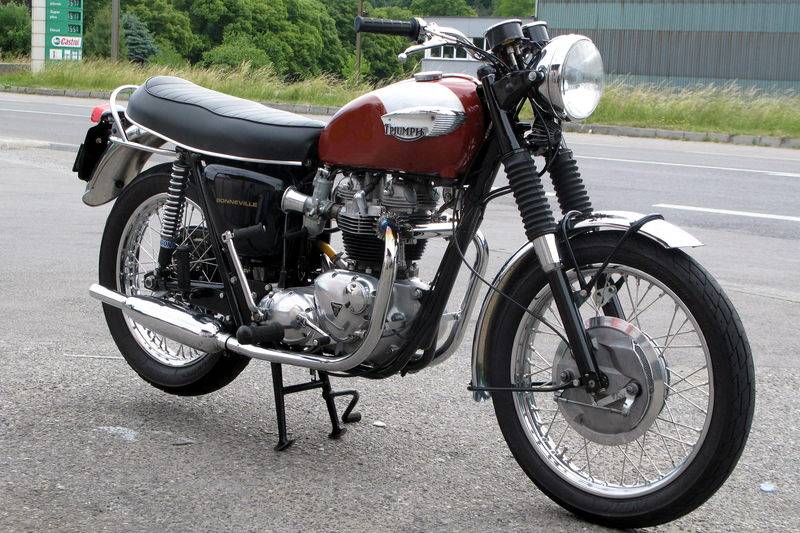 1oldman2 said:
I was hoping it would go into a detailed explanation of the physic of "counter steering"

Lol, I sure as hell wanted one though... dreamed about them, all the time...[COLOR=#black].[/COLOR]

Sweet! The Limey bikes are a family tradition here, although I did have a "sporty" at one time, The 850 commando is a kick in the ass also. 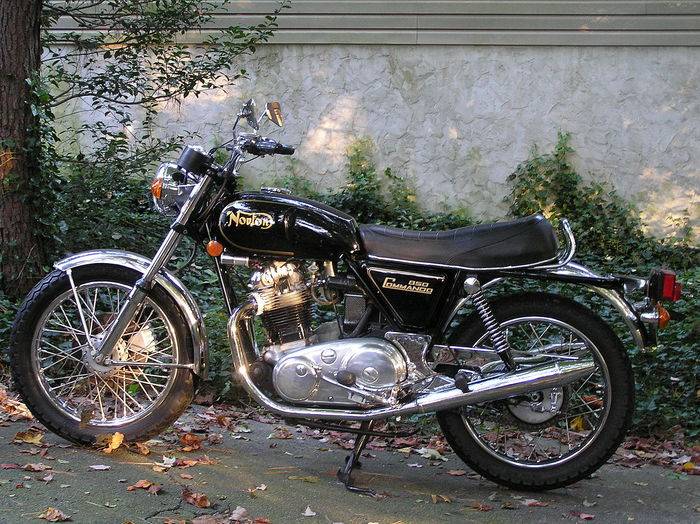 Believe it or not... Norton is still alive...

A team at Delft University wrote a paper, and also did some experiments, with a conventional bike and a "skate" type bike. They created mathematical model for a conventional test bike. One issue not answered, is that the model predicted a maximum stable speed just under 8 m/s, after which the bike would go into capsize mode, falling inwards at an extremely slow rate. However, in treadmill tests with that bicycle, the bike is seen to be "very stable" at 30 kph == 8.33 m/s.

The graph that shows the stable speed range can be seen on page 4 of:

The video demonstrating a very stable bicycle at 30 kph can be seen near the bottom of this web page:

So the capsize mode for their test bike would require a higher speed. In the case of most sport or racing motorcycles, capsize mode starts to occur at around 160 kph (100 mph). At that speed or faster, a motorcycle tends to hold the current lean angle, and it requires significant counter steering torque applied by the rider to change lean angle, with the same amount of effort required to increase or decrease lean angle.

I owned a Norton 850 command for a few years. The engine, transmission, and swing arm pivot were attached to a sub-frame (two pairs of plates, one pair in front of engine and one pair in back of engine, plus a mount at the top) rubber mounted to the main frame to reduce vibration. Exhaust pipes were also rubber mounted. The shift was on the right, and also "backwards": 1 up (shift from first from neutral) and 3 down (for "upshift"), the opposite of most other bikes.
Last edited by a moderator: May 8, 2017
1oldman2

A similar article, originally from 1970, was recently reprinted in Physics Today:

Surprising the SciAm article says nothing about Jones' work....


In April 1970, chemist and popular-science writer David Jones demolished this theory in an article for Physics Today in which he described riding a series of theoretically unrideable bikes. One bike that Jones built had a counter-rotating wheel on its front end that would effectively cancel out the gyroscopic effect. But he had little problem riding it hands-free.

Gyroscopic precession is a reaction to torque along the roll (lean) axis, not a reaction to lean angle, which means it's not a corrective reaction. If a bike is in a coordinated turn, there's no torque about the roll axis and no gyroscopic reaction that would tend to return a bike to a vertical orienation. During the time a bikes lean is increasing, the gyroscopic reaction is to steer less than what is needed for correction, and during the time a bikes lean angle is decreasing, the gyroscopic reaction is to oppose what is needed to complete correction back to vertical orientation. For a typical bike that uses trail for stability, gyroscopic reaction acts as a damper within the range of speed for self stability. Once above that speed, the dampening effect dominates and the bike goes into what is a called capsize mode, where the lean angle increases at an extremely slow rate. To a motorcycle rider at high speed, the perception is that lean angle is held, this could be due to the extremely slow rate of lean angle increase, or since the tire's contact patch is on the inside portion of a tire, an outwards roll torque may be having an additional effect.
jim hardy
Science Advisor
Gold Member
2019 Award
Dearly Missed

naahh,,
i notice those photos have shifter on correct side. Rule Brittania !

gave son my '85, last of the old guard ironheads. 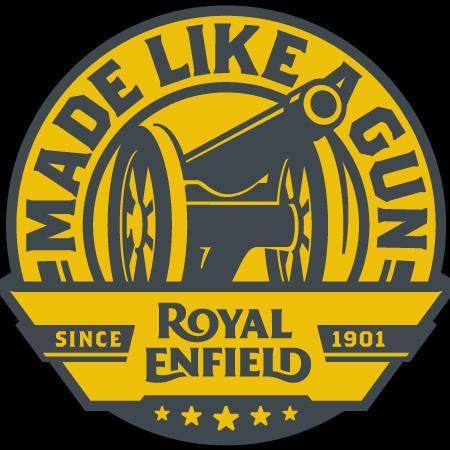 jim hardy said:
I was a Royal Enfield guy.

I saw a real one parked at Fisherman's Wharf, when my family and I stayed in San Jose while visiting my
Mom's cousin ... of course we went to San Francisco, and did the tour thing.[COLOR=#black]..[/COLOR]

That was probably 50 some odd years ago, but that mental image still sticks in my mind... I thought it was the most beautiful thing I'd ever seen...


gave son my '85, last of the old guard ironheads.

From a vintage Enfield page,
http://www.classic-british-motorcycles.com/royal-enfield-motorcycles.html 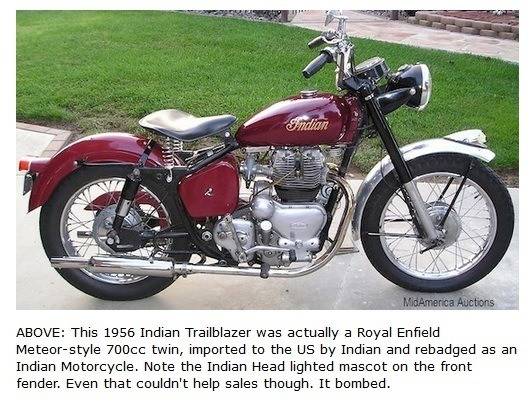 it had the first permanent magnet alternator i ever encountered . I think the magnets needed to be recharged for the lighting system was, well, feeble.
Good thing it had magneto ignition ! I never had to push it home.

ahhh , youth, and the things we shoulda kept....

85 is s a good year if you like the retro look, has the Evo clutch with alternator in the chaincase(like my '56 indian) , and an oil filter where the generator used to be.

ahhh , youth, and the things we shoulda kept....

I read the article a few days ago soon after it was published by the Washington Post. Very fascinating and interesting to study. I have done study on bicycles and motorcycles myself on a small scale and knew about most of what is in the article. Riding motorcycles at a high speed around a curve leaning over to almost a 45 degree angle is scary because of the fear of sliding on even a small amount of loose gravel. I have done it numerous times and never slid. I believe because of the gyroscopic effect holding the line of movement.
However, I do not believe the statement that two opposite rotating gyroscopes cancel each other out. I will have to find a couple and build a gig to test this for myself. The illustration shows them almost vertical indicating the cancellation is for rotation about the same vertical axis. My belief is for rotation of the axis horizontally. I will test both but it will take a few days to get the gyroscopes or build them myself.
A.T.
Science Advisor

golfrmyx said:
I do not believe the statement that two opposite rotating gyroscopes cancel each other out.

My very first Motorcycle was a Zundapp 600cc, well used when I bought it in the early to mid '60s. It wouldn't do a wheelie due to the design. Pop the clutch and the backend would boot you in yours. Being young and foolish I wanted to see what it would do; an unbelievable 43 feet of rubber on blacktop! Yet very smooth for cruising.

Here is a stock photo that is the closest I could find, it looks a bit more recent than the one I had. (Loved that 'ride-off' center stand.) 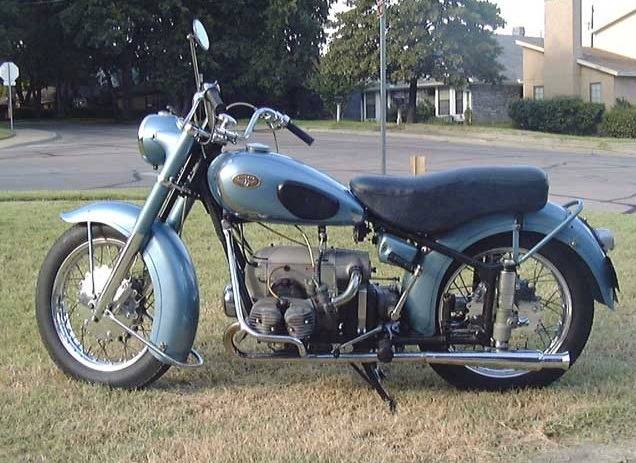 Unfortunately it died of 'hardening of the arteries.' A clogged oil line to the front main bearing sheared the crankshaft.
You must log in or register to reply here.