Summary:
How does a coil spring react to a low amplitude pulse applied to one end?

I am trying to understand the reaction of a steel coil compression spring when pulsed. The spring I am interested in has the following physical characteristics:


The moveable plate is subjected to a pulse that accelerates the plate at a rate of 29,400 ft/sec^2 for a period of .8 milliseconds (by a force of about 1,091 pounds applied to the moveable plate).

I will appreciate any and all responses. Just to be clear, I am not looking for a lengthy explanation here. I would like to be pointed in the right direction and a link to some of that information would be greatly appreciated.

BTW, the book by Wahl is THE ultimate source for spring theory and calculations, but very few people need more information than is in the SMI Handbook.
Quester

BTW, the book by Wahl is THE ultimate source for spring theory and calculations, but very few people need more information than is in the SMI Handbook.

Thank you for your prompt response. The handbook looks very interesting. Apparently, I cannot order it because I am not a member and I cannot become a member since I do not meet their membership requirements. I will continue to search and see if I can get a copy through some other venue.

Your suggestion of "surge" is probably going to be helpful. I had tried several variations like "coil spring propagation" and "coil spring pulse delay" with no joy. Maybe "surge" will prove to be the magic word! I do know a little about spring delay because I used mechanical reverberators years ago in audio amplifier design.
Baluncore
Science Advisor

I appreciate your attempt to help, but I'm not having any luck at that link, either. If I log in as a guest, it will allow me to download one page at a time. I am not a member of any HathiTrust partner institutions.

Thanks for trying!
Tom.G
Science Advisor

The complete download of Mechanical Springs in PDF format is available at:
http://docshare04.docshare.tips/files/26767/267672094.pdf

Quester said:
Summary:: How does a coil spring react to a low amplitude pulse applied to one end?

Ideal springs act instantaneously.
A real spring has mass so that has to be considered in practice.

You could start off with lumped model of spring-mass, and determine the differential equation.

Around page 222 they give an explanation.

https://www.egr.msu.edu/classes/me451/radcliff/lab/Handouts/Exp2_2ndOrderTimeModeling.pdf
outlines a torsional spring - you could adapt for a linear system.
Quester

Thank you 256bits. I will study that lab problem It looks promising.
Quester

Tom.G said:
The complete download of Mechanical Springs in PDF format is available at:
http://docshare04.docshare.tips/files/26767/267672094.pdf

Thanks for your help Tom. That link works well. I downloaded the book.
Quester

Thanks to everyone's help, I have found a lot of information on how to compute the lowest resonant frequency of compression coil springs and I have been able to use quite a few of the various formulas and calculators to get consistent results using different approaches.

However, I am still lost in my quest of understanding the dynamics of what I see as being the response of the spring to a very short, violent pulse.

Perhaps my goal will become clearer if I change my original given condition to be:

"The moveable plate is subjected to a pulse that accelerates the plate at a rate of 350,000 ft/sec2 for a period of 60 microseconds (by a force of about 12,000 pounds applied to the moveable plate)."

Any help will be appreciated.
jrmichler
Mentor

It helps to visualize what's happening before looking for a mathematical solution. I like to use the ESP method - Exaggeration of System Parameters. Think of two cases:

Case 1: The plate is displaced slowly. In this case, the spring force is proportional to the displacement times the spring constant.

Case 2: The plate is displaced almost instantaneously - much faster than the spring can possibly respond. The end turns will compress solid, then a wave will travel down the length of the spring. You can see this for yourself by playing with a Slinky toy (highly recommended to improve understanding).

Now for some calculations. Calculate the velocity reached at the end of the force pulse. You can ignore the spring force for this calculation because it is small compared to the acceleration force. Calculate the distance traveled at the end of the force pulse. Now compare the time to travel that distance to the period of one cycle of the surge frequency, while thinking of Cases 1 & 2 above.

Given the velocity at the end of the force pulse, the spring preload, and the spring constant, calculate how far the plate travels until the velocity decreases to zero. Then think about surge pulses traveling back and forth, and recognize that this calculation is an approximation.

BTW, your numbers for force and duration look very similar to the numbers I came up with when I calculated that the best way to provide a force impulse of defined force and duration to a load cell was to shoot it with a gun of specified caliber and muzzle velocity. The experiment was successful, the oral report well received, after which we found that the professor's hobby was target shooting.
Quester

Thank you for your response, jr. I do often use the consideration of extremes to try to "box in" something with which I have little or no experience.

I had gotten as far as your thoughts above in my examination of this situation, Before proceeding, I will describe the whole scenario. The spring is as described in my first post. the moveable plate weighs about a pound and can be considered to be rigid. The pulse acting on the moveable plate actually has a duration of about a millisecond. It starts with the impulse described in in post #10, then the force decreases linearly to about 900 pounds over the millisecond time period. At that point, the force is removed and the moveable plate has moved about .14" while attaining a velocity of about 27 ft/second toward the fixed plate. From that point on, the moveable plate coasts at its 27 ft/second velocity toward the fixed plate being slowed only by whatever energy is stored in the spring as the spring is being compressed. The moveable plate is stopped just prior to spring bind. The total distance traveled by the moveable plate is about 2 inches. The time of travel would be about 8 milliseconds. I calculate the natural resonant frequency if the spring to be about 140 Hertz. The period of one cycle at 140 Hertz would be about 7 milliseconds, so it seems to me that all the coils of the spring would be involved in resisting the movement of the plate at about 7/8 or about 90% of its travel. If that scenario holds water, I would think that the energy stored in the spring would ramp up at increasing rate for the first 90% of compression until all the spring coils were involved, then continue to increase linearly for the remainder of the plate's travel.

If the purpose of the spring is stop the plate, then the real test is to try and see if it works. The calculations tell whether your choice of spring should do the job, the test tells if it will do the job.

Make sure that the spring is not overloaded when compressed to solid height, because the individual coils are compressing that far during spring surge. Also, if you can find a high speed video, you would find it very interesting to video the spring at 1000 to 2000 frames per second.
Quester

"Did you calculate the spring surge frequency for the case of both ends fixed?"

I calculated the lowest natural frequency for both ends fixed per the example beginning on page 232 of Mechanical Springs by Wahl.

"If the purpose of the spring is stop the plate, then the real test is to try and see if it works."

I wasn't clear in my explanation. The plate is stopped just prior to the spring becoming solid. The spring itself does not stop the plate. Also, I know the spring performs as intended, because the application is repeated millions of times the world over every day.

The purpose of my attempted analysis is to test my personal theory that the spring does not even have time to materially oppose the plate until a significant amount of time after the initial pulse. I don't care whether that is true or not, but I would like to have my theory either disproven or deemed reasonable. Either way, I gain understanding. Once I have some understanding of the system, I can (hopefully) engage is some intelligent discussion about it with others.

The actual design purpose of the spring is to absorb energy from the moving plate so that once the plate has expended all its energy by being stopped, the spring can then return the plate to its original position, ready to begin a new cycle. A person is capable of cycling the system at up to 7 cycles per second. The system handles that rate with total reliability.
Tom.G
Science Advisor

Quester said:
Also, I know the spring performs as intended, because the application is repeated millions of times the world over every day.

Now you have me VERY curious (and probably others too).
I hope (beg) you to enlighten us as to the application, even if it is after you get a satisfying, or even unsatisfying, conclusion to this thread.

I will be happy to tell all in the end. For now, I'll just say that your intuition in Post #11 is in the right arena, just looking at it from a different direction. Think internal instead of external.

Here is a sketch of a rough model of the situation (note the two stops on the moveable plate): 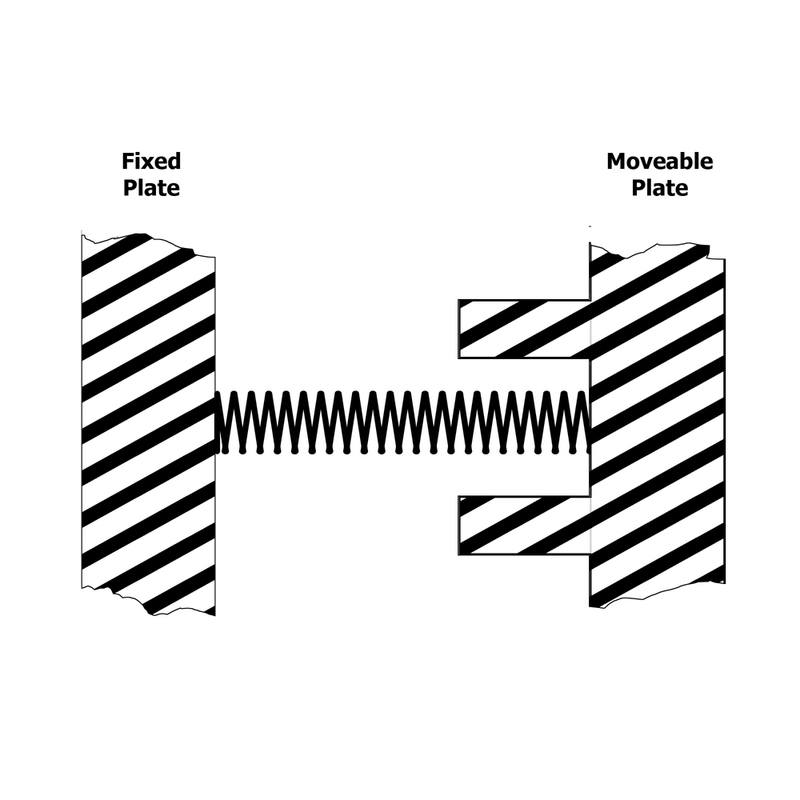 Related Threads on Coil Compression Spring Reaction to a Pulse

? about a compression spring.

F
Initial compression of a spring

K
How To Design Solonoid Coil for AC Voltage

B
Designing a Pulse Jet Engine.