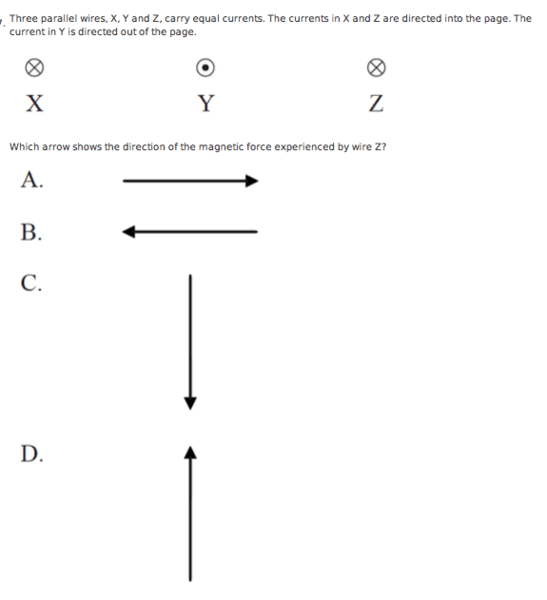 I know that, according to the right hand rule, the direction of the field lines for X and Z are anti-clockwise and Y is clockwise. What do I do next? Thank you!

If you've learned about relativity, its allways cool to look at these problems relativistically, which is where magnetic fields emerge from anyways.

On the other hand, if the currents are flowing in the same direction, electrons in one wire will see the electrons in the other wire as flowing in the same direction at the same velocity, therefore not moving relative to each other. However, from their point of view they will see protons move by really, really fast, therefore the space the protons exist in contracts, the positive field density increases, and they feel a net positive charge in the other wire, and get attracted.

Here is a really good video that shows this without any fancy math:

Finally, the strength of the attraction and repulsion is inversely proportional to the distance between the wires.

Related Threads on Direction of magnetic field experienced by wire

Magnetic Force Experienced by a Loop of Wire

Direction of the Magnetic Field due to a Wire

C
Direction of Magnetic Field of a Parallel Conducting Wire

[Magnetism] Determine the direction of the force experienced by a (+)C

A
Wire Suspended By Magnetic Field