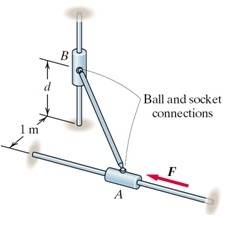 Ends A and B of the 5-kg rigid bar are attached by lightweight collars that may slide over the smooth fixed rods shown in the figure.

The center of mass of the bar is at its midpoint. The length of the bar is 1.5 m. Determine the horizontal force F applied to
collar A that will result in static equilibrium as a function of the distance, d (0.5 ≤ d ≤ 1.5 cm).

sum of forces and moments are zero

Point A only has resisting forces in i and k directions

Point B only has resisting forces in i and j directions

This is where I run into trouble. In another version of this problem that my class is supposed to do, we have to figure out the 'limit' of d in terms of L which is 1 meter in this problem setup. Looking at the figure, I really don't seem to have enough information to say what an acceptable limit of d would be. The problem I have pasted into this post gives d a limit at (0.5 ≤ d ≤ 1.5 cm), but I do not know how that limit is logical.


The problem my class has to solve:

Ends A and B of the 5-kg rigid bar are attached by lightweight collars that slide over the smooth fixed rods as shown in the figure. The center of mass of the bar is at its midpoint. The length of the bar is 1.5m.


Another student from this class and I worked at it for an couple hours and it just isnt clear what we can and can't assume about the geometry of this system. When considering a limit of d when L is a value, should we assume that by limit of d, it means that the absolute highest and lowest d can be when point A moves on its rod? Being a statics problem, we just arent sure if this is a safe assumption. Force F keeps the rod in its current location afterall (because statics!)

This said, when tearing it apart into triangles, we can't seem to solve for either d in terms of l, or even the distance point A is away from point B (in the x direction). There's bound to be a way to simplify this problem, but we havent been assigned problems like this ever before in this class, so have no confidence in having a correct solution for this problem.

Once I can get a good conception of what this problem really is, i am sure i can figure the rest out on my own. Any hints would be very much appreciated!

I believe the context of the problem is Internal Forces and Machines.

Sorry that I didn't provide too much legwork on actually solving for anything in this problem. Here is a go at it.


I would like to take a moment to consider all the information I am given.

d is simply the distance from point B to what appears to be the ground.

F this is the force that keeps the system 'static.'


When I first tried this problem, force F made me think that point A would stay stationary. Thus calculating a limit for d would be done with L alone. Looking at the figure, if L were to get smaller, point A would travel in the -i direction, which would make point B travel in the k direction, affecting the value of d.

Now, thinking about it again with a clear head, I think that the problem could also just as easily be perceived as more of a "well how big or small could d possibly get with rod A positioned L away?" I personally would feel much more comfortable with this perception if it were labeled as 'limits of d' not 'limit of d.' If the second problem I have found with the same figure also gave the limit d in meters rather than centimeters, I would be more assured of this perception.

Only because I have tried the first assumption already and got lost in a sea of right triangles and computer algebra systems, I will try out the problem using the second assumption.

I have already answered c here.


I will give the first assumption a try really quick and post that attempt here when i can.
MrMaterial


I looked at the rest of the problem (That I didn't already post):

2. Derive an expression for the horizontal force F applied to the collar as a function of distance, d and length, L that will result in static equilibrium. Include all free body diagrams and equations of equilibrium.

I decided that my second assumption was correct, or at least lets me finish the problem so I at least have something to turn in to my professor. Here is a go at the second problem: 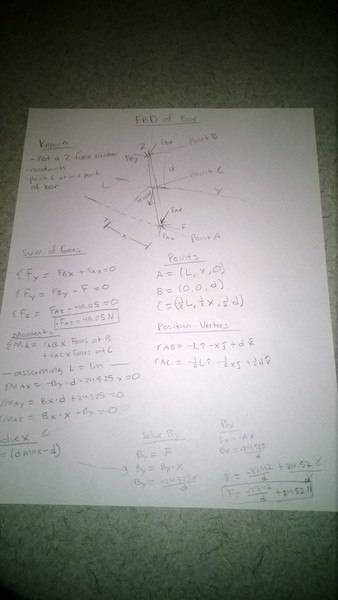 My figure might be hard to read, but I let the "1m" dimension on the original figure be "L" and i left d as is (k directional distance from point B to zero. and then I added in a new variable "x" for the last length.

I then defined points A, B, and C using L, d, and x. Used these points to make position vectors rAB and rAC.

Using the position vectors and force vectors, I used a cross product to find out the sum of the moment at point A. I assumed L = 1m, organized the moments by components x, y, and z.

Since By = F, I decided to solve for By, but then found that I needed to find x in terms of d. 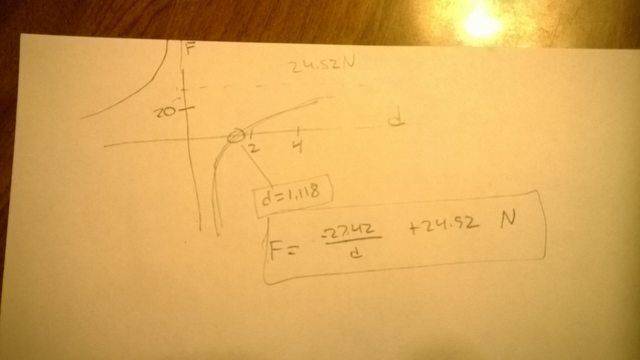 What this graph seems to say is that when d reaches its maximum, F is zero. I suppose that makes sense.

What i am a little worried about is that When d is smaller than maximum, F is in the opposite direction I show it to be. F also goes to infinity as d reaches zero, which also makes sense. As far as the magnitude of F goes for any point d, I am not sure if it seems logical.

Does this look right to anyone? Did i make a terrible mistake assuming x = (dmax - d)? Any feedback would be great
Log in or register to reply now!