A body is acted on by two forces. Find the magnitude and direction of the resultant force by using the mathematical method. I'm not sure if I've done this correctly, any pointers would be appreciated :)

Also what is the angle between the two vectors? Is it 90 or 76 degrees?

Not sure how to describe this in words so I have the image for the diagram.
http://s3.postimg.org/jkti9aqkj/P1130367.jpg

Working out the first triangle.

What is the mathematical method of adding two vectors?

This only applies if the vectors are perpendicular (it's pythagoreans theorem)

Yes, thanks for the pointer.
ehild
Homework Helper

A body is acted on by two forces. Find the magnitude and direction of the resultant force by using the mathematical method. I'm not sure if I've done this correctly, any pointers would be appreciated :)

Also what is the angle between the two vectors? Is it 90 or 76 degrees?

Not sure how to describe this in words so I have the image for the diagram. 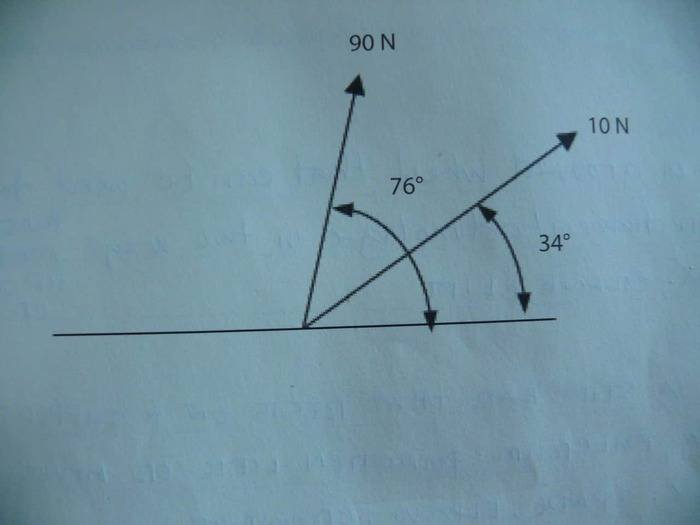 Look at the picture. You see the magnitudes of both vectors and the angles they enclose with the x axis. What are they?

The angle between them is 42 degrees?
ehild
Homework Helper

Write out the "relevant equations". How do you add vectors by components?

Yes, it is the magnitude of the sum vector.

Now I need to find the direction.
ehild
Homework Helper

The force is a vector, so the magnitude of the resultant force is 97.66 N.
Yes, you have to find the angle it encloses with the positive x axis.

Does this answer the 2nd part of the question of "A body is acted on by two forces. Find the magnitude and direction of the resultant force by calculation"?

So the magnitude is ticked at 97.66 N.
The direction is 3.09 degrees?
ehild
Homework Helper

No, it is the tangent of the angle. Calculate arctan of 3.09.


snapperhead said:
Does this answer the 2nd part of the question of "A body is acted on by two forces. Find the magnitude and direction of the resultant force by calculation"?

If the x component of a vector a is ax, the y component is ay, then tan(θ)=ay/ax.
Yes, you can give a vector by its magnitude and angle with respect to the horizontal, or you can define it by their x and y components.

When vectors a and b add and the resultant is the vector c,
cx=ax+bx; cy=ay+by.

I'm sorry but I don't quite understand what you stated. I'm not too knowledgeable with what I'm dealing here really.
Last edited: Jul 6, 2014
Nathanael
Homework Helper

Analyzing the dimensions when you're unsure is often useful. You have units of degrees divided by degrees. This results in 3.09 being a pure (unitless) number.

The reason it is unitless is because it's a ratio. Specifically (if you were to draw the triangle) it is the ratio of the vertical component to the horizontal component.

Components are useful because they are perpendicular to eachother. This means we can use pythagoreans theorem and trigonemtric functions, because they create a right triangle (with the hypotenuse being the "resultant").

If you recall from triginometry, the ratio of the sine to the cosine (y/x) is the definition of the tangent function.

So how do you go about answering the "direction of the resultant force"?
Nathanael
Homework Helper

snapperhead said:
So how do you go about answering the "direction of the resultant force"?

How much triginometry have you learned?
snapperhead

The basics I suppose? (Close to nothing) I'm tackling this question that is way out of my level. I find it confusing, because with this

Explain to me how you got this equation and why you think it works (sorry if this is an annoying request, it's just that a solid understanding of this is helpful)

Have you tried drawing triangles to find the angle of the resultant?
snapperhead

Following an example from a book that has a similar question, I replaced the values with the ones from this problem. Except it doesn't show how to solve the direction.

I've tried a few triangles for calculations, if only I knew what the resultant triangle would look like, I think I could work the angle out with Pythagoras.
ehild
Homework Helper

snapperhead said:
The basics I suppose? (Close to nothing) I'm tackling this question that is way out of my level. I find it confusing, because with this

You have to take the inverse tangent of 3.09. On your calculator, press shift tan and then 3.09. Let me know what you get.

Why do you try to solve problems which are way out of your level? You have to study the basics about vectors and about trigonometry. No use to plug in numbers into equations you do not understand. So what is your level? Have you learnt what are the sine, cosine and tangent of an angle? Have you learnt about vectors and their components? How you add vectors with the geometric method?

This entire problem is a mathematical problem about adding vectors. Have you learned the geometrical/visual method of adding vectors? You just connect the vectors "head to tail" and then draw a vector from the tail of the first one to the head of the second one.

Does this make sense? Are you familiar with this?
snapperhead

gives you an answer of 3.9 degrees. I'm not quite sure what to think of my answer and their answer.

Yes, the "head to tail" concept is fine, along with the basic trig operations of cos, sin, and tan, with vector addition and subtraction.

I just find that when I can't find the solution to one thing or when there is a very small difference in a question, I tend to over think a lot until I find some way to solve it. The way this question and a few of the other concepts seem 'alien' to me because I'm familiar with a different way at school.
Nathanael
Homework Helper

The difference in the answer is because you need to pay attention where the angle is being measured from.

72.07 is being measured from the x axis, however that little calculator website doesn't know where your x-axis is (because it only asks for the angle between the vectors) therefore it's answer is not from the same place.

The calculator simplifies the calculation by making one of the vectors point in the x-axis direction. If you try switching the magnitudes on that calculator (put 10 and 90 instead of 90 and 10) it will give you yet another angle (because it will then use the other vector as the x-axis). This direction is not wrong, it's just measured from a different place.

This is an example of why it is important to understand the fundamentals of what's going on (as opposed to using a calculator or equation that you don't entirely understand)
You must log in or register to reply here.

Related Threads for: Force vectors acted on by two forces

Two forces acting on an object

Two Forces Acting on an Object

Forces acting on two blocks stacked one on another

Finding acceleration of a box with two forces acting on it

Multiple Forces Acting on Masses Attached by a String

Forces acting on a line