How to determine the center of gravity of a satellite

I am trying to find out how to determine the center of gravity of a CubeSat present in an uniform sphere of radius R, using the initial data given by gyroscopes. The satelitte is equipped with magnetometers, gyroscopes, and accelerometers. By taking into account that the only values I have are angular rates around the three axes, it seems that both the Newton's laws and equations of motion are not enough.
Does anybody have any idea?

I'm going to assume that the sphere is massless. Otherwise, we'll be determining the CG (center of gravity) of the combined sphere and satellite.

Step one would be to allow the sphere to role to a rest on a flat horizontal surface. This would put the CG at it lowest point - directly over the point where the sphere touches the supporting surface. The accelerometers would then tell you how the cube was tilted, thus providing a line where the CG must fall.

That "low point" on the sphere will also be used as the bottom of the sphere in the next two steps.

Step two would be to put it on a slippery (frictionless) horizontal surface and hit it with a golf putter - directing a horizontal force on it. The low CG will cause it to spin - and the instrumentation will be able to measure the acceleration and angular velocity.

Finally, put it onto a golf tee and hit it with a frictionless 9 iron (a 45-degree right ascension angle). Again, the instrumentation will be able to measure the acceleration and angular velocity. 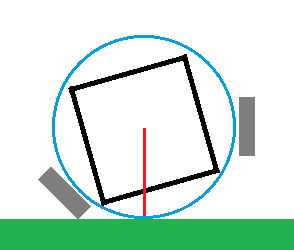 CG will be along the red line segment.
The gray blocks are the frictionless golf heads. One a putter, the other a 9-iron (45 degrees).

Unless the CG is exactly in the middle of the sphere, each golf strike will cause a top spin proportional to the increased velocity.

Now that I look at it, only one golf strike should be needed to compute the CG. Calculations should be simpler and more accurate with the putter.

B How to find the center of gravity of an object

Gravity at the center of the Earth

Center of gravity and Center of mass different?

Center of mass and center of gravity don´t match, why?

Center of gravity (it's not center of mass )

B Gravity in the center of the Earth (a confusion)