How to get a magnitude for polarization force?

I can't use Coulomb's law as that requires the charge on both spheres, and the charge on the neutral sphere is zero which will give a force of zero and this isn't the case.

I was thinking I may be able to apply this formula 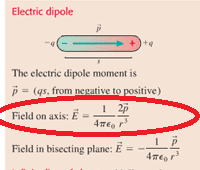 but..F=qE.. and again this requires a value of charge, and I don't know if I can treat the polarized object like a dipole anyway.

Is there any equation that I can use to calculate the force between the charged and neutral (polarized) object? This is to compare with the experimental force values.

How do you calculate the magnitude of a polarization force (theoretically)?

From the electric displacement and Maxwel's laws.

But you mean for the electric dipole ... one sphere is charged, the other, because of the electric field of the charged sphere, has displaced the charges in the conductor. It is the neutral sphere that is the dipole. Remember - a conductor has a whole lot of electrons that can move around.
anees7112

Simon Bridge said:
From the electric displacement and Maxwel's laws.

But you mean for the electric dipole ... one sphere is charged, the other, because of the electric field of the charged sphere, has displaced the charges in the conductor. It is the neutral sphere that is the dipole. Remember - a conductor has a whole lot of electrons that can move around.

Hi. Thanks for the reply.
Yes sorry. We already have the value of charge on the charged sphere (q1).

Unfortunately we have not covered electric displacement laws and just started Maxxwell's laws. I did a bit of research on them just now so correct me if I am wrong.

electric displacement field=D=ε0E+P
E is the electric field, and P is the polarisation density .

Which q is this referring to if I have a neutral sphere?

Anyway I think I may be complicating this a little,as we havent learnt about these concepts yet. I take it there is no simple formula like coulombs law that will work with one charged object and a neutral object to find the attractive force between them?
Simon Bridge
Science Advisor
Homework Helper

Which q is this referring to if I have a neutral sphere?

Neutral matter contains positive and negative charges - you know: electrons and protons. In a metal, some of the electrons are free to move about the surface (typically 2 electrons per atom).

You can work it out by using the method of images.
BTW: Coulombs Law is the hard way of doing electrostatics :)
Last edited: Aug 31, 2012
anees7112

Neutral matter contains positive and negative charges - you know: electrons and protons. In a metal, some of the electrons are free to move about the surface (typically 2 electrons per atom).

You can work it out by using the method of images.
BTW: Coulombs Law is the hard way of doing electrostatics :)

Hmm, okay . So for method of images I would just
1.put the positive test charge +q at the edge close to the charged sphere, and the negative test charge -q on the edge further away from the charged sphere.
2.Calculate the electric field on both point charges and add to get the total E, or the electric field on the 0 net charge sphere.
3.Use this to find the charge density , and hence the total charge on the sphere? and THEN use coulombs law to compare the theoretical force with the experimental force values.

Thanks again!
Oh and I don't really know any other way than the Coulomb's law stuff we are doing at the moment :) Haha I mistakenly picked this first year course thinking physics would be civil engi related but its all electrical stuff.
Simon Bridge
Science Advisor
Homework Helper

Your test charge is the one you you charged up with the van-der graaf generator.
The conductor acts like a mirror for charges ... so a flat conductor creates an image charge equal and opposite the test charge same distance on the other side of the surface.

The sphere would act like a spherical mirror - same rules.

iirc that is really for a grounded sphere.
http://physicspages.com/2011/12/12/method-of-images-point-charge-and-sphere/

for a free sphere you are back to solving Maxwel's equations.

There is physics in Civil engineering ... the problem-solving skills over the whole course are also excellent preparation and generally applicable. It's all good.

When I was an undergrad, I heard a lecture for law students where this blue-chip law firm bigshot told the audience that the firm favors science grads over others (lawyers do 2 degrees) and physics grads over the other sciences - for the problem-solving and reasoning training.
anees7112

Ha, thats the same thing the tutor said to me - about the problem solving skills
learned in this course. And I see what you both mean.

I have something to go by now, cheers for that. I will do some more reading
from the links you posted and keep working on the report.

Hmm, now that you mention it the only friends I know doing law are doing double
degrees (mainly with commerce>accounting). Is that to do with competitiveness in getting jobs (so having another area you can get employment in) or because different countries have different legal systems so one law degree may not be valid somewhere else?

If it were up to me I would study something to do with cosmology/astronomy/astrophysics but I don't think that is viable here in Australia , employment wise.
Simon Bridge
Science Advisor
Homework Helper

AFAIK: you cannot specialize in Law in any college that offers Law degrees. There is an ethical and philosophical basis for this - you cannot just practice law without some context for that practice. It makes sense when you think about it.

Students typically take BA or BCom with LLB because these are viewed as "easy" degrees.
I knew one taking BCom+BSc+LLB ... no social life, no sleep.

BCom is usually a strategic choice: goes to commercial law and, maybe, politics.

BSc makes for litigators - good for criminal law too - or so I was told.
Science is a process rather than a subject for study - BSc/LLB are likely to be good at working stuff out as well as memorizing stuff. The critical inquiry part of science gives you good BS detectors too. Also why you tend to get get rubbish science and tech policies from politicians with arts/classics education.

My standard advise for students is to study whatever lights them up - if you find something fairly easy but your peers seem to struggle - focus on that: it's a talent. Not only will you be happier but it is easier to do well.

There is no way to tell what will be a good career choice in 4 years. I know people who opted for a safe route to money that did not pan out - now all their skills are in areas they don't like so they are stuck in jobs that they hate and not making enough money (or working too long hours) to do what they like in their downtime. That's soul-sucking stuff.

So focus on the happy. Sure you may struggle for money but you won't care because you are more likely to end up doing something you love.
anees7112

I completely understand what you are saying. Don't want to spend the rest of your
life doing something you are unhappy with. My sister for example is a grade 2 teacher, and she loves every moment of that, how great it would be to get paid for something you love!

That said,
civiling engineering won't make me unhappy, but studying anything related to astronomy/
cosmology would make me happier. As in something I would do for a hobby type type happy.

However, I am studying BE/BSc at the moment. So I still can take some
astronomy/cosmology courses. They are 3 under the physics major.


Simon Bridge said:
So focus on the happy. Sure you may struggle for money but you won't care because you are more likely to end up doing something you love.

Little money is not what would make me unhappy, not finding employment in the field would :)

You have given my something to really think over on the long bus rides to and from uni though.
Last edited: Sep 2, 2012
Share:
Share

Suggested for: How to get a magnitude for polarization force?

How to get gravitational force on a gaseous particle?

What is magnitude of dynamic force?

Finding the Magnitude of the Force Acting on an Object

To find direction and magnitude of forces acting in a system

Magnitude of force acting on wedge and block

How to prove that a force is conservative?
2

How can the force of a normal reaction be electromagnetic?

Trying to find HOW to get the velocity.

How to calculate the magnitudes of three forces around a hexagon

How to calculate differential work done by a force in circular motion?