How to get roots of this complex equation

hello, i am stucked at an article from sciencedirect . somewhere it gives me the following equation and then it tells that this equation must have 4 complex roots!

i am amazed how we can get 4 complex roots from this equation as it seems to have roots equal to zero !

Any help would be greatly appreciated!

The four roots are:

The Electrician said:
The four roots are:

thanks for reply but i forgot to explain more, here it is:

we have 3 linear partial differential equations:

now for homogeneous solution we're going to substitute below Equation into Eqs. (11) and (12) at the above picture:

the rest is explained below: 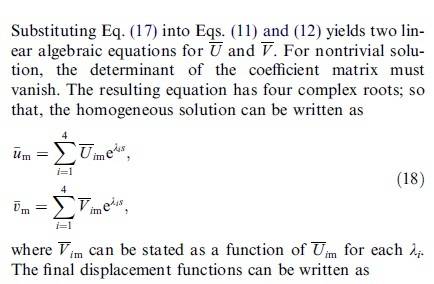 don't mind what the coefficients A,D & B are... they're constants.
also L differential operators are given in Appendix and i've used them

now the determinant of the coefficient matrix must vanish (=0) , the result would be this way:

and in this equation we must find 4 complex roots , i mean 4 complex lambda's
( maybe we can think this equation is correct for all values of x , so we may only have λ^4=0 )


i think your answers are not applicable here

Big thanks to anyOne help me in this matter....
Last edited: Oct 27, 2012
HallsofIvy
Science Advisor
Homework Helper

Yes, obviously the only root is [itex]\lambda= 0[/itex]. Since you now tell us that this is the characteristic equation of a differential equation with constant coefficients, that means that four independent solutions to the equation are e0x= 1, x, x2, and x3.
pm1366

HallsofIvy said:
Yes, obviously the only root is [itex]\lambda= 0[/itex]. Since you now tell us that this is the characteristic equation of a differential equation with constant coefficients, that means that four independent solutions to the equation are e0x= 1, x, x2, and x3.

thanks...this is some likely answer , but here in this article we need 4 different lambda's .
besides, as u see the four independent solutions are different from those u mentioned...that is exponential in the series form and 4 lambda's are included:

That statement is assuming the roots are different. See if you can find something in the article talking about repeated roots and what happens for those.
pm1366

aralbrec said:
That statement is assuming the roots are different. See if you can find something in the article talking about repeated roots and what happens for those.

no ,no where talking about that ... it is an article about cylindrical shells , i can give it to anyone who want to have a look...
aralbrec

pm1366 said:
no ,no where talking about that ... it is an article about cylindrical shells , i can give it to anyone who want to have a look...

Look up 'repeated roots' and 'differential equations' in your textbooks or on the internet.

The solution strategy is this:

You have a homogeneous differential equation (ie one that solves Dy = 0, where D is some differential operator).

Taking a function and adding derivatives of itself to get zero is only possible with the exponential function, so it is assumed that the solution will be of the form y=eλt . Plug that into the differential equation and you have conditions on λ for that solution to work. The condition on λ is called the characteristic equation . Since y=eλt for a specific λ satisfying the characteristic equation has been found to solve the homogeneous equation, a sum of all eλt with every λ found must also solve the homogeneous equation because differentiation is linear. So the total homogeneous solution is Ʃ Aieλit as your excerpt states.

From other considerations we know an nth order differential equation has n independent functions that satisfy the homogeneous equation. If some of the λ are repeated (eg you have four zeroes for λ), you are not finding all those functions so you have to have another way to find them. That part the article hasn't mentioned but HallsOfIvy gave you the solutions -- the idea is to assume the solution is the form of eλt, teλt, t2eλt, ... the highest power of t depending on how many repeated roots you have (if you have four repeated roots, you need four equations with that root). You can confirm these also satisfy the differential equation by substitution and the resulting complete solution will be a summation of all such functions you found.

The idea of doing this is called 'variation of parameters'. The notion was Aeλt is one solution, what if A was allowed to be a function of time, would that work? Plug into the differential equation, and lo and behold, it does with A=tn for some n.
Last edited: Oct 27, 2012
pm1366

it is showing that there must be 4 different lambda for the solution and not repeated lambda's ( λ i=1,2,3,4 )
in this picture there's no solution for repeated roots...
i mean we must have 4 different roots , but the problem is how to find four different complex roots!

Suggested for: How to get roots of this complex equation

How did they get to this differential equation?

Engineering How do I find the differential equation for this circuit?

Engineering How to solve this problem by the method of superposition?

Comp Sci Numerically, how to get the other solution of this 2nd order ODE?

Engineering How to calculate the power distribution through this gearbox?

Engineering How does complex multiplication work?

Engineering OPamp circuit - how to simplify this term?

Engineering How do I draw the Bode diagram of this transfer function?