I have noticed that the only processors that Intel makes that are both dual core and offer hyper threading are their Extreme Edition series. These processors are priced above nine hundred dollars! When do you guys think that they will sell a processor that offers both these features at a price under three hundred?

Intel was generally going to drop HyperThreading, as, in reality, once you have a dual-core, HyperThreading is useless. For example, the upcoming Conroe is not going to be HyperThreaded and generally shows a 20-40% increase over current AMD offerings, which is most impressive. There have been rumors recentaly, however, that Intel would be bringing back some revamped form of HyperThreading for multi-core CPU's. At this point, though, HyperThreading has been rendered useless.
JoshHolloway

Isn't the reason that the hyper threading not as powerful as they made it out to be because the operating system has to be made to work with Hyper Threading? Because I have read that Microsoft is making Vista work better with hyper threading.
Last edited: Apr 30, 2006
dduardo
Staff Emeritus

AMD is actually working on an anti-multiprocessor system. Their cpu is going to be dual core, but will look like one processor to the operating system. The purpose is to not have programmers worry about writing multi-threaded applications.
GluonZ

JoshHolloway said:
Isn't the reason that the hyper threading not as powerful as they made it out to be because the operating system has to be made to work with Hyper Threading? Because I have read that Microsoft is making Vista work better with hyper threading.

Yes, current operating systems limit HyperThreading, due to the amount of threads they can handle. However, HyperThreading was just kind of 'faking dual-core' - which, in some cases, had its advantages - but now that real dual-core processors are here, HyperThreading is pretty much useless. So unless Intel was to revamp this technology, (which, I say again, has been rumored) HyperThreading is quite pointless at the time. Vista is also supposed to be able to handle more threads which will help dual-core (once again, it may have helped HyperThreading, but now that real dual-cores are here it won't really matter). Also, Intel should really focus on a HyperTransport style technology to get rid of the limited FSB (HyperTranspot 3.0 also was http://dailytech.com/article.aspx?newsid=1943").

As, dduardo, said AMD is rumored to be working on 'Reverse HyperThreading' which will allow the processor to, in a way, 'throttle' back and forth between looking like a single or multi-core CPU.


Electronic News: Let’s shift subjects. How many cores will you have in your chips, how will they be managed and what will they be used for?

Gelsinger: I don’t think we know how many there will be. That’s a topic of both research and product and market understanding. We’re on track. We have lots of duals out already, and we have quads and octs under development. Each of those cores can support multiple threads of execution. You can have 16 or 32 threads each.

From what I'm hearing here, it looks as though on at least some quad-core, octo-core, and possibly dual-core, Intel my be adding DSMT (http://web.engr.oregonstate.edu/~benl/Publications/PDCS03.pdf [Broken]) to Core microarchitecture - which is a more capable, powerful, and efficant form of SMT.

Oh, and going back to your first post, one of the Conroe's is supposed to cost around $300 and offers insane performance and overclockability.
Last edited by a moderator: May 2, 2017
JoshHolloway

GluonZ said:
Oh, and going back to your first post, one of the Conroe's is supposed to cost around $300 and offers insane performance and overclockability.

When do you think this CPU is going to be released? Do you have any links that have info about the processor you are reffering to?
GluonZ 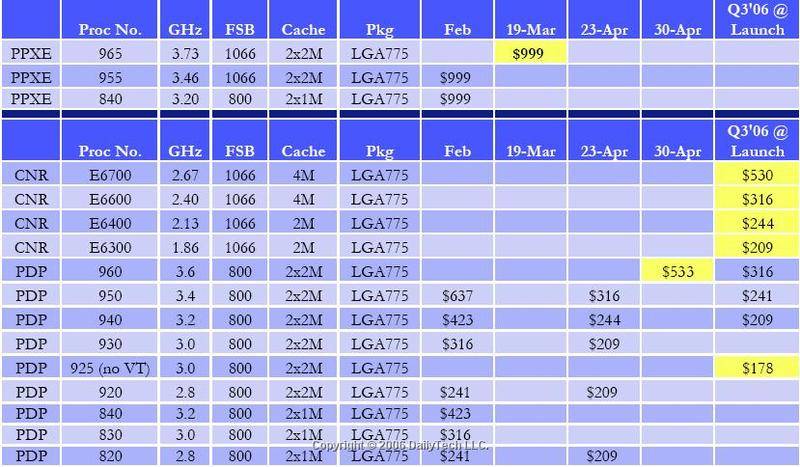 Hope this helps. Google around and you'll find a ton more stuff.

More on Core and SMT:

What about Hyper-Threading and IMC?
Core's impressive execution resources and massive shared cache seem to make it the ideal CPU design for SMT. However, there is no Simultaneous Multi Threading anywhere in the Core architecture. The reason is not that SMT can't give good results (See our elaborate discussion here), but that the engineers were given the task to develop a CPU with a great performance ratio that could be used for the Server, Desktop and Mobile markets. So the designers in Israel decided against using SMT (Hyper-Threading). While SMT can offer up to a 40% performance boost, these performance benefits will only be seen in server applications. SMT also makes the hotspots even hotter, so SMT didn't fit very well in Core's "One Micro-Architecture to Rule them All" design philosophy.

As far as including an Integrated Memory Controller (IMC), we were also told that the transistors which could have been spent in the IMC were better spent in the 4 MB shared cache. This is of course highly debatable, but it is a fact cache consumes less power. The standard party line from Intel is that keeping the memory controller on the chipset allows them to support additional memory types without having to re-spin the CPU core. That is certainly true, and with the desktop/mobile sectors using standard DDR2 while servers are set to move to FB-DIMM designs, the added flexibility isn't terrible. Techniques such as memory disambiguation and improved prefetch logic can also help to eliminate any advantage an IMC might offer. Would an IMC improve Core's performance? Almost certainly, but Intel will for the time being pursue other options.

What is dual-core processor ?

Replace an Intel processor with an Alpha processor

Will an Intel Core i7 920 be faster than this CPU?