Would it be possible to build an engine that runs primarily off a petrol but has a steam engine that captures all the heat lost from the combustion (70%) and applies it towards powering the engine?

Looking for ideas, opinions and attitudes on whether or not it is a practical idea.

So, it's a fair question, but the 2nd law of thermodynamics quickly shows why this is not ideal.

So, let's assume after the combustion, the gas is around 2300 K, and leaves the piston/turbine around 500 K.

Now lets assume we want to use the leftover gas (some of which is water vapor, as it is one of the reactants, which is what I gather you're asking about), then the temperature
of the leftover gases is at 500 K and ambient temperature is at 300 K, and the gases cannot undergo a process that drops them below ambient without having additional energy added to the process, which would decrease efficiency.

Now, bearing in mind that the Carnot efficiency is an irreversible cycle, in other words, no additional lost heat during the cycle (physically impossible as heat conducts through the engine and convects to the ambient air) and no friction (also impossible, as all mechanical processes are subject to friction), and bearing in mind that changing from 500 K to 300 K is usually a far less amount of energy than changing from 2300 K to 500 K, a change of 200 K as opposed to a change of 1800 K, the secondary cycle is rarely worth the harvesting. We call the heat rejected at 500 K "waste heat," as it is not nearly as useful as the gases immediately after the combustion. Conversion of waste heat to work is far less efficient (almost half that of the primary cycle), and the quantities of energy from the waste heat are also smaller.

So, in terms of cost, it is rarely justified to harvest this heat. Thermoelectric generators are sometimes applied to cases like these, but they are rarely worth the cost. Automobiles sometimes use a turbocharger that harvests exhaust fumes to drive a turbine that drives a compressor that increases the pressure to the air intake of the vehicle. Anyway, you can havest the energy, but it is usually not worth it for most applications, and you're usually better off designing your turbine or piston so that the gas leaving the system is as close to ambient pressure and temperature as possible upon exiting.

I hope that helped a bit.
Wylie Thomson

What about all the heat transferred to the piston cylinder after the engine has been running for a while.
Could the heat from that be used to vaporise water then power and steam piston adjacent to the main engine.
Like the way a nuclear power plant uses water to power a turbine except the water is used to power a steam engine
jlefevre76

Yes, that is possible, but again, the engine temperatures are going to be lower than the combustion gases, and the energy leaving the engine via conduction and convection at the surface might be small quantities (ideally you want them to be kind of small quantities, as that's an indication you're not loosing too much energy from non-adiabatic processes). But, it is possible. You'd need to do an analysis to determine how much energy is lost due to heat transfer through the metal parts of the engine, and see if it's worth it. I don't know if this is done. It's kind of a funny problem. On the one hand you want an engine to not transfer the heat because that represents waste, but on the other hand, you want it to dissipate enough heat so it doesn't get too hot to destroy any of the mechanical parts. A radiator system is what is typically used. If I understand, you're proposing to replace the radiator with a heat exchanger to drive an waste heat recovery system? Not a bad idea, but I can't tell you the quantities of energy harvested, or if it would be worth it cost-wise.

As an interesting side note, limited research has been done on ceramic engines in order to operate at higher temperatures, and (maybe as a secondary benefit) decrease the conductive losses though the engine block. If you could crack that one, you'd have a lot of money to spend from the royalties of people using your patent. So far as I know, that still falls in the realm of the impossible for the time being. Anyway, good that you're thinking creatively, that's a good start to answering some of the questions that have already been asks. Good luck for you!
OmCheeto
Gold Member

Wylie Thomson said:
What about all the heat transferred to the piston cylinder after the engine has been running for a while.
Could the heat from that be used to vaporise water then power and steam piston adjacent to the main engine.
Like the way a nuclear power plant uses water to power a turbine except the water is used to power a steam engine

BMW has been working on your idea for at least 10 years. They call it a turbosteamer.
They achieved a 15% increase in output.
Still no word on a release date.

Another similar idea, was the 6 stroke engine, invented 100 years ago, by someone named Leonard Dyer.
I'm not aware of any going into production since then.
Paul Rentz

Gas-Steam engines are what powered Henry Ford's Highland Park Model T plant. There were nine 6,000 horsepower engines in the power plant at Highland Park.Instead of me trying to explain them, you can read more at the Ford Oral Histories section where Hugh Dolan tells how it worked. My grandfather was the draftsman to Edward Gray who invented and designed these engines. 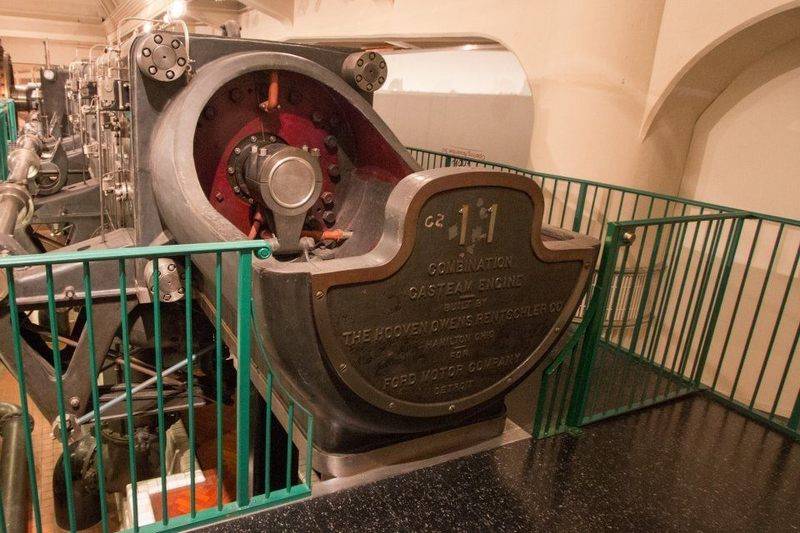 In power generation STAG (steam turbine and gas) are common.

Gasses from the gas turbine go to a waste heat boiler which makes steam for a steam returning.

So the answer is yes if your vehicle is the size of Titanic or larger.
Baluncore
Science Advisor
2021 Award

When the temperature difference has fallen to the point where you can no longer boil water, there may be an application for a Stirling Engine. It uses two thermal reservoirs at different temperatures. https://en.wikipedia.org/wiki/Stirling_engine

Just a quick note that I think jlefevre76 meant to say that the ideal Carnot cycle is "reversible," which would be correct.
As an aside, note that its being a reversible cycle would not mean it's 100% efficient, but that its overall entropy change is zero. Its efficiency is the maximum possible between two given temperatures.
Share:
Share

A Carnot engine between the Earth's poles and equator
2

Measurement of actual CO2 mass emitted from a diesel engine

Could steam cars be possible in the 2020s?