Is there a Scientific explanation to the Weirdest thing I saw today?

Mk said:
The power company working in his area would cause plasmids to appear in his house? Sounds crazier than his story, if you ask me.

So far nothing is explained. I am of the sort that believes there is an explanation even if we never find it. Right now we are searching through a black box without a flashlight, so we have to feel our way around. I think if one of us were there at the time, we would have an easier time with the explanation.

I am not going to resort to paranormal explanations just because we could not figure it out. I am also not fully signed on to it being a plasmid. A power company working on the lines in the region opens the possibility to some electric phenomenon associated with the grid.
Last edited: Oct 3, 2008
sjls
Plasmoids to me seem to be unstable and dangerous if you touched it. If you watch a video of an artificial one they move around and flicker like a candle or fireball. Imagine looking at a steady glow from a light bulb but no light bulbs are present anywhere around in my case – That is what I saw. I have had electrical power surges that fried the garage door opener and before doing so cause strange actions but this one I truly believe was caused and related to this light that generated something that communicated with remote garage door openers. Now whether this was intentional or natural I don’t know.
Andre

it is hypothized that ball lightning may occur when lightning hits a small amount of water.

They claim that it has sort of been reproduced in the laboratory.
Danger
Gold Member

Weird, indeed. My grandmother had a plasmoid invade her house when she was young (late 1800's). It must have come down the chimney, because it popped open the door of the pot-belly stove and bounced across the floor, then just vanished.
I did have one thought about this, but if others saw the same thing in the same place it's invalid. I was thinking that whatever screwed with the garage door might also have stimulated neuronal activity in the optic system to give the illusion of a light. Multiple people wouldn't share the same one, though.
sjls
Was it really a plasmoid?

Based on everything I learned I do not believe this was a plasmoid because weather conditions where fine and this thing happened inside our kitchen - how could it come inside the house???
Danger
Gold Member

The last I heard, plasmoids were still something of a scientific mystery. Indeed, some experts didn't even believe in them.
Maybe it came into existence inside the house, and radiated a strong enough EM signal to mess up the garage system through the walls. As to why it formed, I don't know nearly enough about the subject to tackle the question.

You didn't have a light-bulb in the microwave, did you.
Oh, wait... wrong thread...

This is what it looked like except larger.
Last edited by a moderator: May 3, 2017
Phrak

Hi, sjls. Where did the picture come from?

Do you live in Florida or somewhere like it, where lightning can strike out of a clear sky?
Last edited by a moderator: May 3, 2017
fileen

Sounds like someone slipped you guys the magical mushrooms. Everyone has the same strange hallucination all at once, it arrives and is gone in a matter of seconds... One time I had some mushrooms, and nothing happened for a good hour, all my friends were tripping and I was all ticked because I wasnt. Then out of no where I have this feeling of impending doom, look out the window and see a bright ball of light floating out of the sky, it hits the ground and spreads out burning everything in its path until it reaches me, when reality kicks in and I realize Im hallucinating. I didnt hallucinate anything else all night. Maybe you guys just had a group hallucination
Phrak

fileen said:
Sounds like someone slipped you guys the magical mushrooms. Everyone has the same strange hallucination all at once, it arrives and is gone in a matter of seconds... One time I had some mushrooms, and nothing happened for a good hour, all my friends were tripping and I was all ticked because I wasnt. Then out of no where I have this feeling of impending doom, look out the window and see a bright ball of light floating out of the sky, it hits the ground and spreads out burning everything in its path until it reaches me, when reality kicks in and I realize Im hallucinating. I didnt hallucinate anything else all night. Maybe you guys just had a group hallucination

I recognize that from Madonna's book, but it wasn't that blurry...
Last edited by a moderator: May 3, 2017
Phrak

Danger said:
I recognize that from Madonna's book, but it wasn't that blurry...

That's wild danger. Scan it, post it, and we'll decide if Madona's hind quarters speaks to the serealistic school of plazmoidal art.
sjls
These things should not be appearing inside someone's house under any weather conditions. And I wasn't eating mushrooms b/c 2 others saw this light just as in the picture. You need to read my first post to understand.
Charlie G

Sounds like ball lightning. A poorly understood electrical phenomenon. On wikipedia they actually have a nice picture of it occuring in Japan, and it seems to fit your description pretty well.
Charlie G

My bad for repeating whats already been said, I didnt look at everyones replies. Also on wikipedia it mentions ball lightning occuring in a church, so I guess that it could just as easily occur in your home.
Ivan Seeking
Staff Emeritus
Science Advisor
Gold Member

Another form of lightning that is considered rare but has even been observed moving down aisles within an airplane is ball lightning.


...An historical observation of a woman who was "chased" by a Ball Lightning at her own wedding was cited in an ABC television program by Arthur C. Clarke and narrated by George Scott during 1984.


Observations of ball lightning have been reported for centuries, but the origin of this phenomenon remains an enigma. The 'average' ball lightning appears as a sphere with a diameter of 300 mm, a lifetime of about 10 s, and a luminosity similar to a 100-W lamp. It floats freely in the air, and ends either in an explosion, or by simply fading from view. It almost invariably occurs during stormy weather. Several energy sources have been proposed to explain the light, but none of these models has succeeded in explaining all of the observed characteristics. Here we report a model that potentially accounts for all of those properties, and which has some experimental support. [continued]

Link now dead. The quote comes from the Credible Anomalies Napster where a number of other refererces can be found in addition to information on other interesting phenomena.
https://www.physicsforums.com/showthread.php?t=58374


The Structure and Stability of Ball Lightning
The main characteristics of ball lightning are well established. They include its general appearance (shape, size range, brightness, etc.), its peculiar motion and, less satisfactorily, its energy content. A remarkably consistent picture emerges from the thousands of detailed descriptions which are now available. There is, however, no such consistency in the various hypotheses that have been put forward to explain ball lightning. The only thing most of them share is an ability to explain a few aspects of the phenomenon at the expense of physically impossible requirements in other areas. If one is to accept that a single phenomenon is being described in all these observations, it seems clear that ball lightning is, at the very least, an electrical and chemical phenomenon; and several branches of both disciplines seem to be involved [continued] 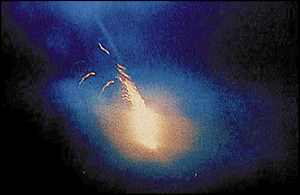 
A BBC cameraman spotted three bright lights in the sky over the Malverns near the village of Hanbury on Tuesday and filmed them with a video camera. 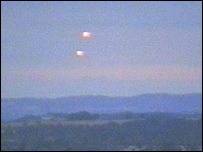 Now here is the really strange part of this thread...


sjls said:
Sorry I don’t have any pictures- I don’t know how to post one.

sjls
I am still not convinced that this was ball lightning b/c it was inside and only lasted 2 seconds max.
Log in or register to reply now!

Related Threads on Is there a Scientific explanation to the Weirdest thing I saw today?

Quick! Ask me what I saw today

I saw my philosophy professor today

Guess what I saw on the Indian Reservation today

The ugliest thing I ever saw
2

Is scientific genius a thing of the past?
2

What is the scientifical explanation of death?

Weirdest/things that blew your mind when you learned them
6