Life on Earth -- Which appeared first?

These are both prokaryotes, simple cells without a nucleus.
After more than a billion years, the more complex eukaryote cells appeared (cells with a nucleus and mitochondrial endosymbionts).

From the initial eukaryotes, plants and animals evolved. There are also fungi and single celled eukaryotes that are neither plants nor animals.
Probably plants arose first (in the oceans- you should be able to easily google it).
Plants probably also preceded animals on land.
A big reason for animals to roam onto the land is to get food resources not available in the ocean. That would not happen before plants were there. That would be plants that grow on land.
(Another reason for animals to be out of the water would be to escape predators.)

There are prokaryotic cells that can photosynthesize, but because they do not have chloroplasts (a photosynthetic endosymbiont indicative of plants) they are not what many would call plants.
Last edited: Sep 6, 2020
jim mcnamara
Mentor

These are the names of the kingdoms living things that we see nowadays:
https://www.ruf.rice.edu/~bioslabs/studies/invertebrates/kingdoms.html

Code:
And this is how they probably arose (note: there are other possibilities especially for Fungi):


Code:
Note that all of this has changed since I got out of graduate school 50 years ago.
There are some other versions you might see.
Genava

The current definition of the kingdom Plantae (aka the Plants) excludes the algae and the fungi, but includes the mosses. Fungi and algae (Chromista) were probably among the first eukaryotes and very probably the first to colonize the lands. But mosses are also good candidates. I think that now the best bet is on the fungi, because they are very tough life beings. Although I must point out that the most convincing evidences for fungi, animals and plants on land are chronologically very close, during the Ordovician. So for the moment this is quite an unresolved question. BUT, a good argument against the rise of animal life on land before the plants is that the oxygen levels were probably too low before the rise of land plants. Oxygen related metabolisms are really important for mobile life, this is much more efficient than the anaerobic respiration.

Although I must point out that the most convincing evidences for fungi, animals and plants on land are chronologically very close, during the Ordovician. So for the moment this is quite an unresolved question.

Good job! My takeaway is putting things into classifications has problems. And then assuming where they fit follows suit. So who came first is not a trivial question. I thought I was saying that. Apparently not.

For switch grass you can go into a population in a field and find individuals with different ploidy, ex: octaploid, tetraploid. You can take samples from the same clump, which agrostologists usually think of as one individual, and find differing ploidy.

Dog vomit and "related" species are in the Amoebozoa. Right now, where that group fits is not clear at all.

All of this flies in the face of cladistics as we have used it to categorize organisms. The organisms ignore us and our taxonomic systems completely. DNA/RNA analysis is adding some better, but not foolproof, tools. So working back 2+ billion years is very hard, IMO. 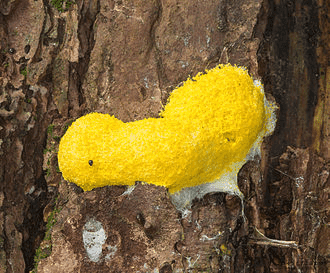 and the obligatory Far Side 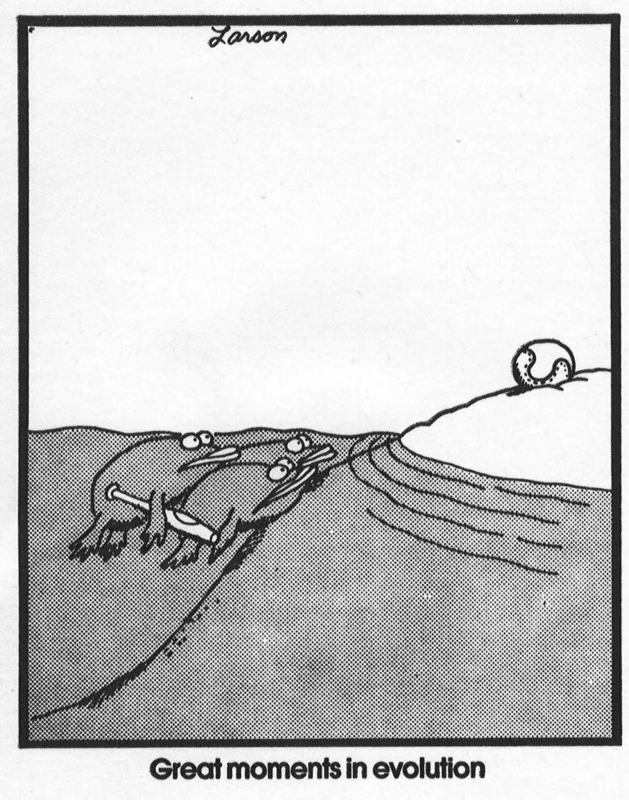 I have sometimes wondered if the division between animals and plants (and the other kingdoms) happened before or after multicellular life appeared.

(My wild hunch is that if it's the latter that happened, these multicellular ancestral forms were probably more animal-like than plant-like, and eventually a branch of them became more plant-like and eventually just what can be classified as plants. But that's just a hunch.)
jim mcnamara
Mentor

There are Protists that are autotrophs, making their own glucose from sunlight and ##CO_2##. There are others, heterotrophs, that use external chemical energy, e.g., fixed carbon from the autotrophs or compounds derived from metal compounds in minerals.

Protists were around for 2+ billion years, way before Plants or Animals evolved. So the split you are looking for started early on.

Chloroplasts (green organelles in eukaryotic cells that photosynthesize) are derived from protists that "merged" with existing other kinds of early protist cells. Modern cell organelles were derived similarly. See link below.

The really important part is not Animals vs. Plants but procaryotic vs. eukaryotic cell types. Early eukaryotic cells presumably used oxygen and fixed carbon that originally was created by procaryotic organisms. And now comes from both kinds of photosynthesizing cells.

And we do not support speculation on PF, by the way.
snorkack

Well, we need "speculations" to be able to pose hypotheses and ask questions. But then we need to be ready to listen to and accept evidence that is contrary to initial wild guesses.
There is a clear evidence that common ancestor of plants and animals was single celled. A part of the evidence is that both red and green algae include single celled as well as multicellular groups.
Dragrath


First things first the terminology "protist" is not scientifically useful as it serves as a waste bin taxa for Eukaryotes that aren't plants animals and fungi. It iis now well established by genetics that there are two major divisions among Eukaryotes one roughly corresponding to the "algae" that largely or more aptly suggest plesiomorphic possession of a chloroplast whereas the other major lineage are almost entirely heterotrophs. In more detail things become far more messy as there have been a number of independent secondary endosymbiosis events and there has been a large degree of convergent evolution losses of photosynthesis and even reaquisition of photosynthesis but this largely covers the basic split as those details are well beyond the scope of this discussion.


As others have said there is very strong evidence that the split between the two origional domains archaea and bacteria was a very early occurrence soon after life arose. Since speculation is forbidden I will not discuss what the oldest evidence for life on Earth is since scientists do not agree on this and probably never will however some more recent phylogenic estimates for when LUCA(the Last Universal Common Anscestor) suggest the split between the two crown group domains was around 3.4 Ga.with LUCA itself occurring before 3.9 Ga. The point is that neither bacteria nor archaea are older than the other they clearly show evidence of a shared common ancestor. This is a phylogenic estimate so dates should be interpreted carefully but for this far back in time it is likely the best we can do.

For reference the origin of Eukaryotes has long been a hot topic of debate but we are starting to finally get firm answers since metagenomics enabled the sampling of "unculturable" microorganisms enough to realize that our culturing process was blinding us to the vast majority of life on the planet the so called "microbial dark matter" but metagenomics has been herder to gain acceptance due to its potential for contamination but thanks to a team of Japanese researchers performing a decade of extensive work to raise them in a controlled setting we can now have more or less direct proof that they are complex archaea which largely have obtained many genetic sequences previously only known in Eukaryotes.

Point is we can much more confidently say Eukaryotes likely arose from complex anaerobic archaea which associated with or co opted with aerobic bacterium to survive in the now oxygenated world. The Phylogenetics study cited finds that LECA(the Last Eukaryotic Common Ancestor) likely occurred around 1.8 Ga but due to definitively Eukaryotic fossils we know it had to be before 1.6 Ga. This suggests a rapid evolutionary radiation of Eukaryotes.

It is also worth noting that modern cyanobacteria appear to share a last common ancestor around this time. This is particularly interesting as this is very close to the fairly precise radio-dating for one of the 3 major asteroid impacts since after the GOE event 1.849 Ga. Given the target rock was a shallow sea around the Supercontinent Nuna it is quite possible a mass extinction may have occurred though confirmation will be hard since unicellular organisms are hard to identify in the fossil record if they get fossilized at all yet alone after 1.8 billion years later where only the deep impact complex kilometers down below the initial crater surface remains.

Life on the surface is quite hard to gauge at the very least there are some ancient evidence for algae colonizing shallow waters around the continents over a billion years ago. Surface life fossils are far more recent from the Ordovician time frame. However the terrestrial fossil record has always been poor and there are a number of things which suggest there was something going on up on land earlier.

One is the recent confirmation that Horseshoe Crabs are indeed true arachnids since nearly all arachnids are terrestrial this raises a question of whether the ancestor of arachnids diverged underwater and independnetly came on land in every other lineage or whether they came from a last common ancestor that was adapted to terrestrial environments. This latter scenario has a fair amount of support since a combination of modern research of arachnids reveals widespread UV florescence among modern arachnids derived from the organization of features in their cuticle a trait also identified in modern horseshoe crabs and for fossil chelicerates including the extinct eurypterids. Given the likely plesiomorphic characteristic of this UV florescence which sprectrally peaks in wavelengths now blocked entirely by the Ozone layer it seems logical to favor the terrestrial origin for their common ancestor. Given the Ordovician appearance of horseshoe crabs and eurypterids this implies their common ancestor had to have predated this divergence. Thus it is possible there is far older terrestrial biosphere elements that haven't been discovered making an identification of when and where quite challenging to assess. Fungi are unfortunately too understudied to assess. And the distinction among eukaryotes may be mute given studies of plants and their closest relatives among multicellular green algae found that a key development in the algae closest to plants and plants themselves was horizontal gene transfer with a bacterium which gave them the ability to survive in air.

Such a trait transfer suggests prokaryotic probably life beat multicellular life to land anyways. But yeah evidence that far back in time is hard to get.
John Plant

Interesting to think this one through:
Replicating molecules appeared first- I suspect.
Then some 'viruses' needed to adapt by surrounding themselves with a cozy protective 'cell membrane'=bacteria
Now as bacteria evolved some would have been mobile [animal precusors perhaps]and some would have just stuck to a rock and lived their lives[plant precursors maybe].

Moving about on land is not as easy has flailing about in water, but just sitting there photosynthesizing is easy in water and on land[well sort of] too. Also the oxygen levels in the atmosphere was too low for animal type respiration out of water but atmospheric CO2 was plentiful for plant life.

So the land was owned by the plants for 100s millions of years. Until oxygen levels built up and self propelling organisms to scramble onto the beach
.
It's also why there is so much coal- because the trees died and there were no aerobic bacteria to consume the dead wood fo many millions of year! It just lay there with new trees growing on old fallen trees.
jim mcnamara
Mentor

Okay - thanks for the participation. We are wandering off so let's end things now.
Thread closed.
PS: Gary Larson is great but even he admits he does off-the-wall science.... so maybe he is better fit elsewhere.
Log in or register to reply now!