this evening a sizeable and shallow M6.6 quake SSW of the South Is. of NZ has produced
the largest T-phase event I have so far recorded on my seismic system 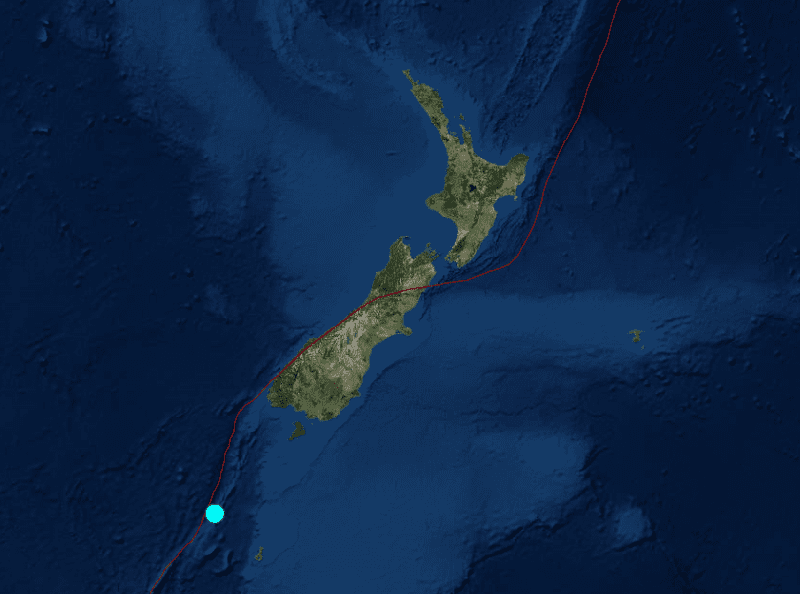 one of the short period sensors, a 4.5 Hz geophone
this shows the labelled P and S wave arrivals followed by the very large amplitude T-phase wave arrival at around 07:22 UT

I have shared a number of posts showing recordings of T-phase events over recent years
but this one, to coin a phrase, blows all of them out of the water"

As a reminder and also info to new comers to my posts
The T-phase waves are ones that leave the seafloor at a point roughly above the quake focus and
then travel through a deep sea path till, as in this case, they hit the continental shelf offshore of the east coast of Australia and then travel the last ~ 15 km through the ground to my recording equipment.
The T waves travel much slower than the P and S waves and hence the considerable delay in their arrival, in this case, some 18 minutes after the P wave arrival.

THis is interesting. Do you have a reference for T-waves as in an educational video or article?

I tried to find one but kept turning up only P and S wave demos.

and this cool highschool teacher video which talks about surface waves:


jedishrfu said:
THis is interesting. Do you have a reference for T-waves as in an educational video or article?

will look up again ... had supplied in posts in days gone bye ... will find them

no, they are waves that travel in the SOFAR Channel at depth in the sea


jedishrfu said:
No hobbits were injured in this earthquake right?

nope well out in the southern ocean

Wow, the I didn't know the SOFAR could be the channel of earthquake waves but of course it makes sense since they are acoustic.
jedishrfu
Mentor
Insights Author

Does the SOFAR collect and amplify the T signal?

Does this then cause greater surface damage?
davenn
Science Advisor
Gold Member
2019 Award

jedishrfu said:
Wow, the I didn't know the SOFAR could be the channel of earthquake waves but of course it makes sense since they are acoustic.

yes, an interesting condition. I personally only became aware of T-phase waves around 5 years ago when I first started seeing these burst of signal arriving on the seismo short period sensors well after the P, S and surface waves had arrived. It was with discussions with fellow amateur seismologists that we discovered the existence of T-phase waves.


jedishrfu said:
Does the SOFAR collect and amplify the T signal?

The T waves start as the P wave, at the focus of the quake, which is a longitudinal compressional wave ( same as sound) at the seafloor water boundary, they then propagate as a sound wave in water within the SOFAR channel that just acts as a waveguide, like a RF microwave waveguide. Actually a better analogy would be an atmospheric ducting waveguide that happens along coast lines and can produce low attenuation paths for ~ 100 MHz and up.
Once the T waves hit the continental shelf, they again become P waves and their speed has been observed to increase.

Tropospheric ducting of radio and television signals is relatively common during the summer and autumn months, and is the result of change in the refractive index of the atmosphere at the boundary between air masses of different temperatures and humidity's. Using an analogy, it can be said that the denser air at ground level slows the wave front a little more than does the rare upper air, imparting a downward curve to the wave travel.

Ducting can occur on a very large scale when a large mass of cold air is overrun by warm air. This is termed a temperature inversion, and the boundary between the two air masses may extend for 1,000 miles (1,600 km) or more along a stationary weather front.

Temperature inversions occur most frequently along coastal areas bordering large bodies of water. This is the result of natural onshore movement of cool, humid air shortly after sunset when the ground air cools more quickly than the upper air layers. The same action may take place in the morning when the rising sun warms the upper layers.

From what I am aware, the SOFAR channel is produced by similar processes within the ocean ... differing layers of water temperature and density.

I am not sure if "collect" is the right word ( maybe it is) but if the sound waves in the water enter the channel at the correct angle, they will get trapped in the channel and propagated at reasonably low attenuation

Amplified, no, I don't see a mechanism that would cause that. Just lower attenuation than compared through the ground path


jedishrfu said:
Does this then cause greater surface damage?

no, because of their overall small amplitude, I doubt that they would cause any damage, probably wouldn't even be felt.
It's the surface waves of an earthquake that causes the damage. Their low frequency and rolling motions is what buildings cannot handle.

distance of quake from me 2000km
T-waves have been recorded from quakes on the South Island of NZ and on the coast on the west side and to the south
I have never ( as yet) seen T waves from earthquakes in the Kermadecs, Tongan and up into the Fiji region ( all north of the North Island of New Zealand).
Discussions with others has at this time have surmised that the seafloor ridge extending NW 'ward from the west coast of NZ may be blocking the SOFAR channel 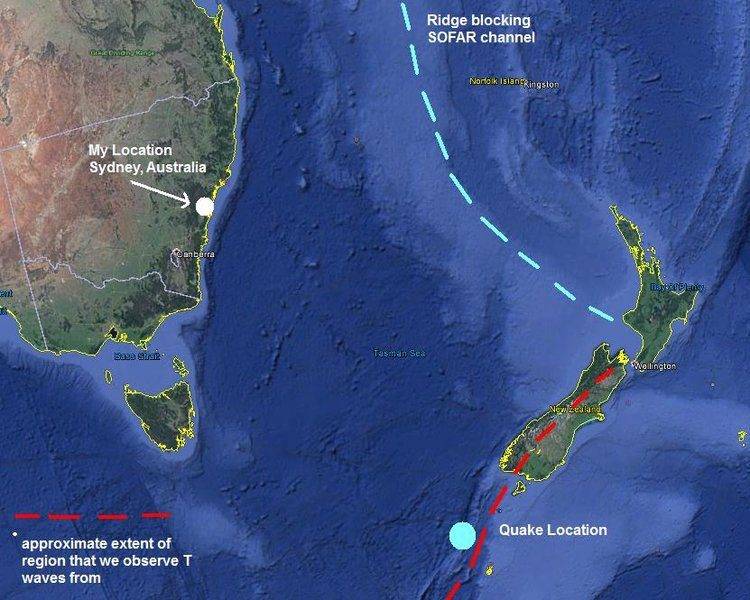 New Zealand - The Tip of A Hidden Continent