Mechanism or method to unlock a window from the outside?

I hope this is the right place to post about this.

I live in a multi-unit condo, and I have a window that I am trying to lock and unlock from the outside. The window is from the kitchen and looks out onto a public-ish breezeway where I can access easily. I know this might seem a little bit eccentric, but I am constantly passing groceries and packages through this window, and would like to be able to lock and unlock it from the outside, almost like a door. Currently, it only locks on the inside using a latch. Otherwise, the "front door" of the apartment is through in a long hallway, and then through a more cumbersome entryway and series of doors which are difficult to get through when I'm carrying things. If my spouse is home, it's easy to pass things through the window, but I would like a solution to this which lets me unlock the window by myself.

I've attached a couple of annotated photos of the lock mechanism; please let me know if you need to see anything else. 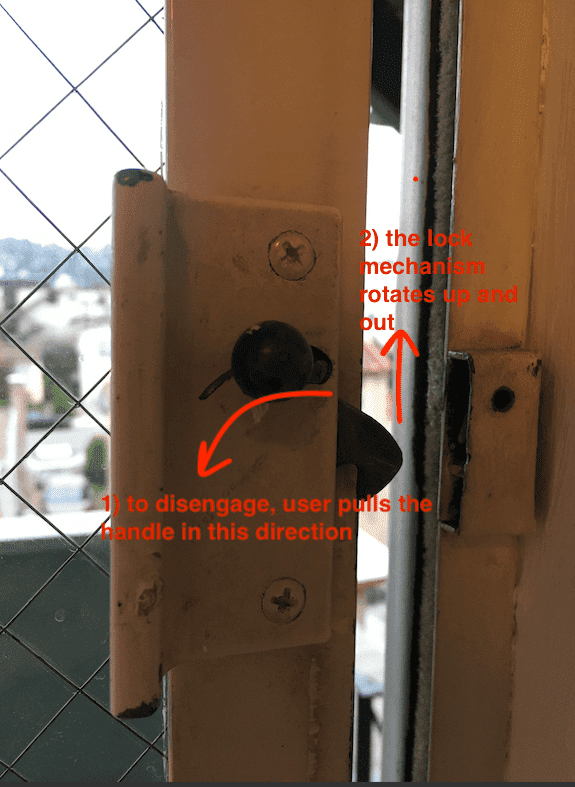 I imagine I can solve this problem by the following, but need help fleshing out the details:
As an alternative to the last item, maybe instead of threading wires through the window, I could control the "claw" with some smart-home application like Nest (don't know too much about that), which would be a lot more elegant.

If it makes it simpler, I'm not trying to solve per se for re-locking the window after it's been opened. Also, once the lock is engaged, I can slide the window open, so I don't need a mechanism to 1) disengage the lock and then 2) also provide a sliding force to open the window. I can do the slide by myself from the outside.

To summarize, I believe the main problem I'm trying to solve for is the mechanism that can engage the lock from the inside and mimic the human hand. I do believe it has to be electrically powered, and that there needs to be some sort of switch on the outside (whether a physical switch or using some app on my phone) in order to engage the claw and undo the lock.

I understand I might create a security tradeoff here by doing this, but I don't have anything irreplaceable or of great value inside the apartment, and the convenience of being able to pass things through the window would be pretty helpful for me.

My first thought is to use your cellphone to do the unlocking, since there is already some security built-in when using it for communications. Maybe via BlueTooth, or via the Internet connection inside your condo.

You'd need to find an actuator that can be controlled via BlueTooth or via the Internet, and be sure you can install it on your window to be the overall lock. I'm not that familiar with the different systems that are available, but I'm pretty sure there are good solutions out there. You might even automate a few other items around your home at the same time...

Here's a Google search for the types of systems I'm thinking of...

Once the mechanics are figured out, the communication could be done with:
These avoid a lock-box and the need to put holes in an exterior wall, building owners tend to frown on that!

Oh, a possibility for the mechanics; instead of 'gripping' the knob, how about a wedge traveling vertically along the righthand side of the knob. You might need to replace the knob with a roller of some sort though.

The existing catch appears to rely on the latch engaging with a round pin. That pin could be made movable, then withdrawn or inserted by a linear actuator mechanism. The force required to slide the pin is much lower than that needed to counter the spring in the latch. Linear actuators are available at low cost.
riverdinero

Wow, thanks for all of these ideas, guys. I am going to look into these actuators -- never heard of that before.

As I continue to examine the problem, I think it could be as simple as some sort of actuator that pushes the knob diagonally down towards the left -- I just need some mechanism that can push and extend a few inches in one direction I believe, and it sounds like this is exactly what actuators do!
rbelli1
Gold Member

Can you place a bar on the inside to block the opening of the window? If so you could build something to move it in and out of the way.

BoB
You must log in or register to reply here.

Related Threads for: Mechanism or method to unlock a window from the outside?