Speed of Moon without Sun gravity.

My Question is:
What is speed of moon relative to Earth without the gravitational pull of the sun and hence the isolated length of the lunar orbit?

can be approximated as the average distance between apogee and perigee (2 *pi *((a+p)/2 )) / (time of revolution in what? seconds?)

(assuming perigee and apogee are measure as a radius)

I say approximated because it's also moving away at 32mm/year ...
Last edited: Oct 31, 2010
SpeedofLight

This looks like homework, SpeedofLight. Even if it isn't, you would learn more if you tried to answer this question yourself. Have you tried to do so?
d3x0r

what goes up must come down - 50% of the orbit is slowed by the sun 50% is increased by the sun - so +50%-50%=0%. Are you trying to build a simulation?
D H
Staff Emeritus
Science Advisor
Insights Author

The effect is not zero.
d3x0r

sure it is, otherwise for the past thousands of years the moon wouldn't have had the same period - at any given point on the path it's not a constant velocity, but overall, is it a significant amount that the average is not +0 from the sun's gravitation?

And if there wasn't a sun, wouldn't it have to maintain the same average velocity (so the sun would have to disappear at 1 of two particular moments to have it even remotely work)

Actually in retrospect, even then, the moon's orbit would be translated from correct to orbit the earth alone, so the moon would have to be shifted too... just really not practical to even consider
Last edited: Oct 31, 2010
D H
Staff Emeritus
Science Advisor
Insights Author

d3x0r said:
sure it is, otherwise for the past thousands of years the moon wouldn't have had the same period ...

The same period as what?

The calculation to determine what the orbital period of the Moon would be ignoring the presence of the Sun is fairly simple. I do not want to say what exactly that calculation is because this looks a homework problem. I have no qualms in saying this: The result of that calculation is not 655.71986 hours.
SpeedofLight

Assuming no other bodies are present, Newton's law of gravity yields an equation for the period of a pair of bodies orbiting their common center of mass. You need to use that equation.
SpeedofLight

I was reading this website: Crackpot link deleted
and I found that the Moon would revolve around the Earth at 3279 km/h without Sun influence on Earth-Moon system. Tell me what do you say with this?
Last edited by a moderator: Oct 31, 2010
D H
Staff Emeritus
Science Advisor
Insights Author

I would say nonsense. The calculation is easy. Try it.
SpeedofLight

They wanted to isolate Earth-Moon system from solar system because since it revolves around the Sun it has an acceleration thus is no more a inertial frame of reference, so by isolating it, measured speed of moon would be equals to C according to Special Relativity.
D H
Staff Emeritus
Science Advisor
Insights Author

You are referring to a crackpot website. There is no calculation there, no measurement. Just complete nonsense.

Try the calculation. It is not hard.
Chronos
Science Advisor
Gold Member

Three body problem. The easy way is to subtract tidal influence of the sun from the moon - doh, you get DH's solution!
Plebeian

With out the sun's gravity?

No, you can't. Gravity doesn't work that way in general. You can treat objects with a spherical mass distribution (objects whose density varies only with radial distance from the center of mass of the object) as point masses, but in general you cannot treat an arbitrary collection as a point mass.

Besides, that is not the question raised in the original post. That asked what the period of the Moon's orbit about the Earth would be in the absence of the Sun. That is an easy calculation to make. Since the OP won't do it, here it is:

That 53.40 minute discrepancy is about 0.136% of the true synodic period. Rather small, but very much observable. So what explains this discrepancy? Simple: This calculation ignores the effects of the Sun, which are obviously of a perturbative nature given that the simplistic calculation comes pretty close to the mark.

A frame with its origin at the Earth-Moon barycenter is not an inertial frame. The Earth and Moon are orbiting the Sun. We can pretend it is an inertial frame by accounting for the acceleration of the frame toward the Sun as a fictitious force. With this, the gravitational force exerted by the Sun becomes a tidal gravitational force (physics term) or a third body effect (solar system dynamics term).

The resultant forces will be quite similar to those depicted in this diagram from the wikipedia article on tides. Interpret the arrow as pointing to the Sun and interpret the circle as representing the Moon's orbit about the Earth: 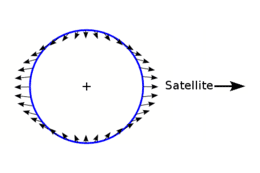 Hello D H,
if i remove sun gravity and earth gravity from the moon, what is the equation should I use to find the speed of the moon??(so the moon is walking on straight line.)
Thank you.
D H
Staff Emeritus
Science Advisor
Insights Author

You are asking a nonsense question.
SpeedofLight

what is the formula(equation) to find speed of moon while the moon doesn't effected with any gravity?(i want to know what is the orginal speed of moon).
If there is no gravity,then there is no speed ?
if these nonsense questions,sorry...
russ_watters
Mentor

The result of an imaginary scenario can be anything you choose to imagine. There is no formula for that.
threadmark

The moons orbit is affected by the deceleration and acceleration of the earths obit velocity. This shift in velocity causes the apogee and perigee in the moons orbit. But if the suns gravitational pull was not present there would be no way to accurately calculate the mean velocity because velocity shifts would not occur in a predictable formula. the orbit vector cant be attained because the relative position of the moon cant be calculated before the velocity shift occurs in the earths orbit velocity. So depending on the position of the earth and moon when the gravity is no longer present would be the only way to calculate velocity.

SpeedofLight said:
what is the formula(equation) to find speed of moon while the moon doesn't effected with any gravity?(i want to know what is the orginal speed of moon).
If there is no gravity,then there is no speed ?
if these nonsense questions,sorry...

No need to apologise. It's not at all obvious. In fact, it took the best minds of the world thousands of years to figure this out!

If there was no gravity or any other external force acting on the moon, it's velocity would be constant. This means that it its speed would never change, and nor would the direction it was travelling in.

Next you need to do calculation three and figure out the suns speed relative to the center of the milky way galaxy and do another vector sum.

In layman's terms you could call that the moon's speed relative to the universe.
Note that this speed is not constant, but changes with time in both magnitude and direction.

There are lot's of smart people here who can tell you why that is not quite right, or is at least definition dependent. But it's a reasonable first cut at the speed of the moon relative to the universe. Note also that this is the speed *with* gravity, not the speed *without* gravity. Also it includes not only the Sun's gravity, but other gravitational sources as well.
Best.
Jim Graber
Log in or register to reply now!

Related Threads on Speed of Moon without Sun gravity.

Q: Limit on a moon's orbital radius due to sun's gravity

Gravity of the Sun?
2

Turning the Moon Into a Sun