The Mandelbrot Set has a third dimension: the Bifurcation Diagram 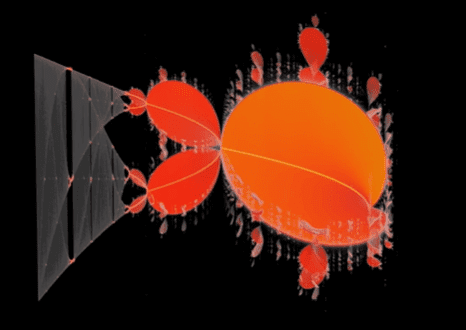 Question: is this video accurate? I always question the veracity of YouTube science videos.

I think you can trust certain channels to be accurate Like veritaseum, smartereveryday, 3brown1blue, numberphile and others related to them. They do their homework and they create great content.

Veritaseum lists numerous papers as well in the description of the Video that you can check. Some though are behind paywalls.

i too was fascinated by this dimensional connection.
anorlunda
Staff Emeritus
Insights Author

Did you catch the plug in the video for James Gleick's book ?https://en.wikipedia.org/wiki/Chaos:_Making_a_New_Science

When I read that book 32 years ago, it made such an impression, that I bought several copies to give to my friends. I just learned that it won a Pulitzer Prize. It was very good.
DaveC426913
Gold Member

anorlunda said:
Did you catch the plug in the video for James Gleick's book ?

Name sounds familiar. His books were probably what I was reading back then.
Klystron
Gold Member

anorlunda said:
Did you catch the plug in the video for James Gleick's book ?https://en.wikipedia.org/wiki/Chaos:_Making_a_New_Science

When I read that book 32 years ago, it made such an impression, that I bought several copies to give to my friends. I just learned that it won a Pulitzer Prize. It was very good.

I used to carry a soft-back copy of James Gleick's "Chaos" gifted by my father in my car to read in off moments. "Chaos" led me to study fractal dimensions and axiomatic set theory at university.

Also enjoyed Gleick's science articles in the New York Times and Washington Post over the years. "Newton" struck me as the definitive modern biography of Isaac Newton with interesting comparisons of early and modern mathematical notations and Newton's productive work while escaping the plague. I wrote a book review on "Time Travel: a History", I think at the public library website. Gleick's biography of Richard Feynman "Genius" is on my reading list.

Klystron said:
Apologies for not watching the videos. Guess I prefer reading books and PF.

Well yes - and now I want to read the books!

I assume the science has progressed in the 3 decades since Gleick's book.
Any recos on this specific relationship (Mandelbrot and bifurcation) - as opposed to more general books on fractals?
DaveC426913
Gold Member

I had a hard time sleeping last night. My mind sparkled with thoughts like a field of fireflies on a hot evening.

In the latter half, the narrator says something to the effect of "the bifurcation diagram only exists in the real number plane of the Mandelbrot graph, since we only measure real things with it." But he also says the other buds off the main body have their own bifurcations.

So, presumably, you could take a slice along any line through the Mandelbrot'plane and view its cross section.
And presumably, we would see distorted renderings of the BD.

What would the cross-section look like if, instead of slicing exactly along the x-axis, we sliced thorugh and angle of .01 degrees? Now it would miss the miniature artifacts far in the negative x range and plow right into emptiness (at least for a while. The Mandelbrot set is one single entity - all black areas are connected). Would the BD sort of bottom out at zero as it crossed these deserts of ... non-Mandelbrotliness?

Is there meaning to such a slice?

As we swept out the slice, clockwise from x=0 through x=-y and on through x>infinity, presumably we would see a moving, transforming BB that would, every once in a while return to pseudo-normalcy as we reached one of the larger offset buds.
Last edited: Feb 2, 2020
anorlunda
Staff Emeritus
Insights Author

DaveC426913 said:
I assume the science has progressed in the 3 decades since Gleick's book.

There is a 2nd edition to the book. Amazon says the 2nd edition already sold more than 1 million copies.
Share:
Share

Related Threads on The Mandelbrot Set has a third dimension: the Bifurcation Diagram

Measure of the Mandelbrot Set

A
Quadratic Recurrence and the Mandelbrot Set

B
Dimension of a set

C
I Dimension of a set with vector function

M
Is there a mathematical way to calculate the bifurcation of a system?

J
Are these permissible ways of writing Mandelbrot's Equation?