Problem's exact wording: When we looked at the work done by a force F, up a ramp, we were confused about the role of gravity that acts in the down direction. Investigate what work , if any gravity does and how this influences the applied force up the ramp acting on a mass.

Note on question: The applied force is at an angle to the ramp, and this was asked as part of a culminating activity in a gr.12 geometry and discrete math course.

My thoughts while looking at my pretty diagram: There's the normal acting perpendicular to the surface, gravity acting downwards, and an applied force acting at angle to the the ramp. So, gravity doesn't really do any work, since it's acting more like friction, the object it is acting on needs a greater applied force to cause motion. Gravity itself is not causing any displacement, and therefore no work. The gravity that acts in the down direction should be broken into its components. The horizontal component is acting in the direction of the ramp's incline,adding to the applied force? While the angled component has the same angle as the ramp, and acts opposite to the applied force, just like friction? except for the angle? Is what I'm thinking right? Help? Please?

When the gravity force is broken into the appropriate components,

ii) the second gravity force component is acting along the vertical axis of the ramp (perpendicular to the surface of the ramp), parallel to the normal force.

Keep in mind that the work done of gravity force does not depend on the angle of the inclination of the ramp. It only depends on the vertical height. As there is a change in height of the mass as the mass moves upward the ramp, there is work done by the gravity force, which is a negative work with respect to a conventional reference frame, if the direction of the applied force is assumed to be positive.
Hootenanny
Staff Emeritus
Science Advisor
Gold Member

Just a clarification here. No component of the weight acts horizontally; one component however, does act parallel to the incline (down the slope). The below diagram should clarify further;
http://upload.wikimedia.org/wikipedia/en/e/e7/Free_body.gif [Broken]
Here we can see that the force of gravity can be divided into two components [itex]mg\sin\theta[/itex], which acts perpendicular to the incline and [itex]mg\cos\theta[/itex] which acts parallel to the inclined plane. Note however, that there are no components of weight acting in the horizontal plane.
Last edited by a moderator: May 2, 2017
Cali

Thank you both! I would've never thought to consider the ramp the axis.
Meson

Yes, I wasn't refering to the horizontal with respect to the level ground, I meant horizontal axis along the ramp, that is the inclined coordinate system or plane. Please read carefully, Hootenanny.


EDIT: Here is a diagram depicting my point: 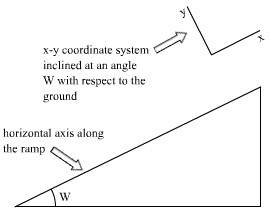 Work Done by Gravity on an Incline

Work done by gravity on a object on an inclined plane

Confused with inclined plane and work done by gravity

Work by Gravity and Tension forces on an Incline

Work is done by the force of gravity on the bike?

Work done by gravity on block sliding down incline

Work done by the gravity force

Work done by gavity on an inclined plane

Work done by friction on an incline plane

Work done by friction on an incline plane